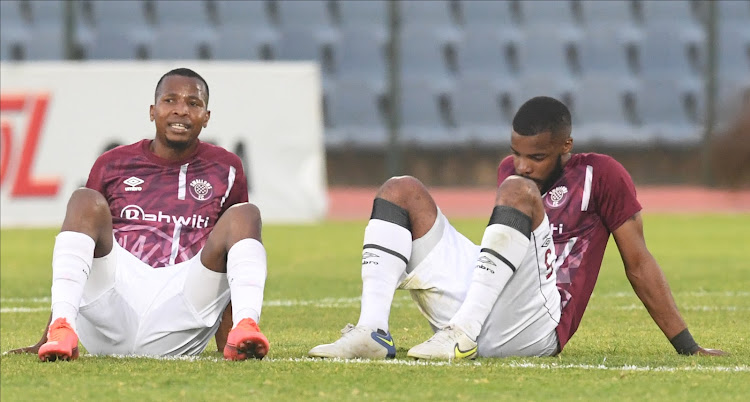 Swallows players after the DStv Premiership match against Chippa United at Dobsonville Stadium on Saturday May 14.
Image: Sydney Seshibedi/Gallo Images

Swallows FC coach Dylan Kerr hopes they can shake off the “curse” that has stuck with them for most of the season as the Birds desperately look to save their DStv Premiership status.

Swallows are one of the four top-tier sides that could be relegated to the GladAfrica Championship in the league's final round on Saturday.

Kerr’s men dropped crucial points in a goalless draw against Chippa United at Dobsonville Stadium at the weekend and remained in 15th place, a position that sends teams to the promotion-relegation playoffs.

Baroka gave themselves a faint hope of staying in the big time when they surprisingly beat SuperSport United 3-1 in Polokwane on Saturday, while Galaxy drew 0-0 against Marumo Gallants in Mbombela.

PSL relegation battle to go down to the wire

The DStv Premiership relegation battle is set to go down to the wire after Baroka FC beat SuperSport United 3-1, while Swallows FC and TS Galaxy ...
Sport
1 month ago

Swallows and Baroka are level on 25 points while Galaxy are two points above them. Maritzburg are on 28 points, but they have two games to play where a single point will be enough for them to avoid the axe.

Kerr was left to bemoan the bluntness of his men in front of goal as they were further dragged into the relegation quagmire, being unable to take their chances and beat Chippa.

“We were our own worst enemies. We knew they were going to come and defend, maybe break away and snatch a goal. So, we knew we had to be patient.

“I said to them [Swallows' players] during the week that you have to be clever to beat the centrebacks at Chippa.

“We took the game to them and I can’t fault the players for that. They knew how big this game was. But again, decision-making in and around the penalty area has hurt the club.

“We were wasteful. We dominated the game like we have done in all our PSL matches, but I think we’ve got this curse of not being able to put the ball in the back of the net.”

There have been reports of Swallows struggling to pay salaries to their squad and disgruntled players boycotting training.

‘You are playing for your children’s school fees,’ Baroka coach tells players

Baroka stand-in coach Vincent Kobola has reminded his players that they are 'playing for their children’s school fees' as they approach the decisive ...
Sport
1 month ago

Swallows will travel to Kaizer Chiefs for their final game of the season where even a victory might not guarantee their safety.

“We need to win and hope Chippa can beat Galaxy and Maritzburg beat Baroka,” Kerr said.

“If we can’t score a goal with that much dominance and in the previous games, where we’ve missed some sitters [then we're in trouble]. We’ve got to be more clinical, players have got to be more adventurous in the penalty box. Try to make the opponents make a mistake.

“We’ve been in a position where we get wide, we get into the box, but there’s nothing from it. Even the passes into the box were not to our players. It was just hopeful football, hoping that someone will get to the end of it.

Swallows were relegated from the top-flight in 2014-2015, and dropped as far as the fourth-tier before their current ownership resurrected the team and steered them back to the Premiership as National First Division champions in 2019-2020.

The Birds ended a creditable sixth in their first season back, but have battled with second season syndrome this campaign.

How Kabelo Mahlasela got his groove back at Royal AM

Royal AM coach John Maduka has revealed how he managed to revive the career of former Kaizer Chiefs player Kabelo Mahlasela who has found a new lease ...
Sport
1 month ago

Kaizer Chiefs have been found guilty of fielding ineligible players in their DStv Premiership match against Sekhukhune United by the Premier Soccer ...
Sport
1 month ago

Liverpool won an absorbing English FA Cup final on Saturday as they prevailed 6-5 in a penalty shootout after the Wembley showpiece somehow ended 0-0 ...
Sport
1 month ago