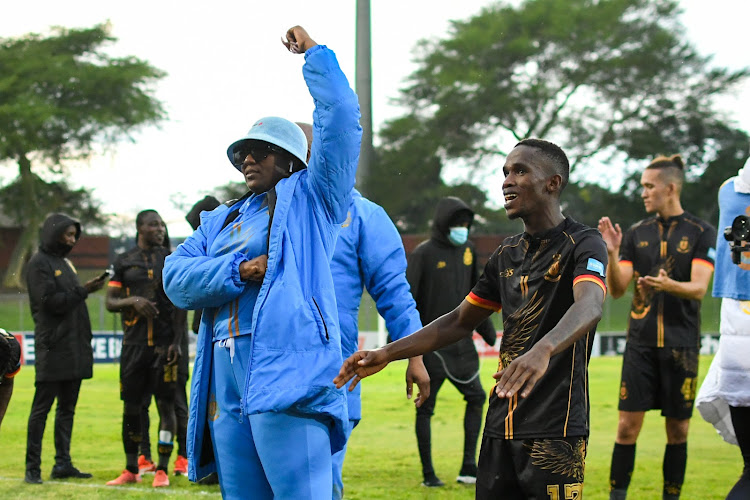 Shauwn Mkhize during the DStv Premiership match between Royal AM and AmaZulu FC at Chatsworth Stadium on April 24.
Image: Darren Stewart/Gallo Images

Royal AM boss Shauwn “MaMkhize” Mkhize has vowed the club will not add its name to the list of one season wonders.

South Africans have witnessed several teams that came into the DStv Premiership and had a good run in their opening campaign only to struggle with consistency in later seasons.

A perfect example would be Swallows FC, who arrived back in the top tier with amazing energy to end sixth in their promoted season in 2020-21, but ran out of steam and are on the verge of being relegated back to the GladAfrica Championship.

Questions have circulated on whether Royal, who bought Bloemfontein Celtic’s top tier status two days before the current campaign and are challenging for second place as Saturday's final round looms, are destined for the same fate.

“We don’t want to be compared with anyone. People must allow us the space and know Royal AM as Royal AM,” Mkhize told TimesLIVE.

“You can’t compare us to anyone because we have our own identity and let’s keep it like that. We take it one game at a time, and we are going to continue to do that if we go to the Caf.”

Richards Bay FC ensured their promotion to the DStv Premiership from the GladAfrica Championship on Sunday even though they were held to a 0-0 draw ...
Sport
1 month ago

Royal have two games to play before the end of the season due to a postponement of one because of Orlando Pirates reaching the Caf Confederation Cup final. The third-placed Durban team are on course to compete in continental football in 2022-23. Sides in second place in the Premiership qualify for the Caf Champions League and those in third for the Confed.

Mkhize said Royal have not just been enjoying their journey into the top flight, but also learning and working on ways to improve going forward, with an ambition to change the status quo in SA football.

Royal's long-term vision is to ensure KwaZulu-Natal teams are regularly in the running for top honours in the Premiership.

Mkhize said while Royal have overachieved according to the targets they set themselves ahead of their maiden season, they will not get carried away by their early success.

“Success is not planned but as I’ve always said this year, we wanted to save our status and we ended up being in the top two or three mix,” Mkhize said.

“The initial plan for next season was the top eight, and now we don’t know where we are going to end up. Our intention is to be in the top eight, but what I can say is that we are not here to add numbers.

“I think our biggest lesson for this season is that we must play every game as if it’s a cup final and not take anything for granted.”

Though they boast a good defensive record in the DStv Premiership and the Champions League, former Mamelodi Sundowns playmaker Teko Modise says they ...
Sport
1 month ago

Arsenal falter in Champions League race with defeat by Newcastle

Newcastle United dealt a huge blow to Arsenal's chances of qualifying for the Champions League by beating them 2-0 in the Premier League on Monday.
Sport
1 month ago

Orlando Pirates were affected psychologically by taking a 2-0 scoreline into their home leg and have many aspects that need improving for the Caf ...
Sport
1 month ago