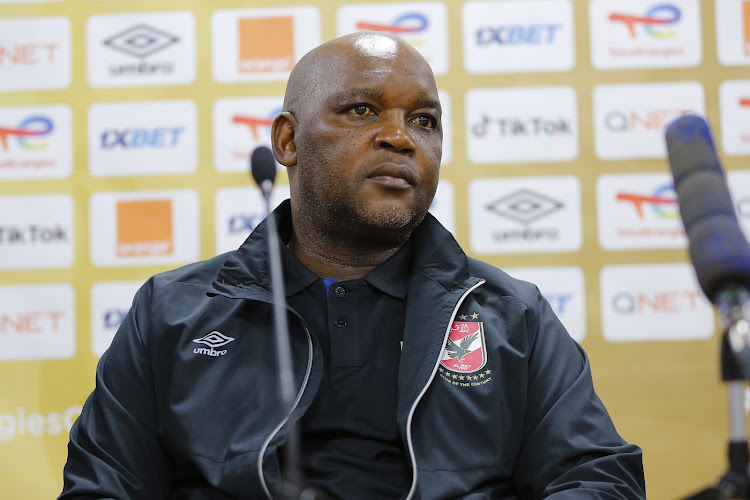 Al Ahly coach Pitso Mosimane appears to have turned on the flattery for SA referee Victor Gomes who will blow Monday night’s Caf Champions League final between the Egyptian giants and Wydad Athletic.

Mosimane will renew the two-storied love-hate relationships in the final at Wydad’s home ground, the 45,000-seat Stade Mohamed V in Casablanca, Morocco.

One is against his nemesis team in the Champions League, Wydad. The other is with a referee who used to be Mosimane’s nemesis when he was coach of Mamelodi Sundowns in the Premier Soccer League, but who the Ahly coach has since formed a closer relationship with. Mosimane now regularly professes his admiration for the development in Gomes’ officiating standards.

This week, Mosimane was waxing lyrical about Gomes again, turning on the flattery before Monday’s final.

Just finished watching the Wydad vs A Petro Luyanda. The manner at which he managed the game,players,and the dugouts.Just like he managed Senegal vs Egypt.
Can we give him the honour of Ikhamanga? Please include Zakhele Siwela.

“How I used to criticise Victor Gomes — ate my humble pie long time back and I am his biggest fan and he knows that,” Mosimane tweeted.

“I give him the respect he deserves and he is currently the No 1 referee on the continent.

“Just finished watching [the Champions League semifinal between] Wydad vs Petro Atletico Luanda. The manner in which he managed the game, players and the dugouts. Just like he managed Senegal vs Egypt.

“Can we give him the [the Order of] Ikhamanga? Please include Zakhele Siwela.”

Gomes and assistant referee Siwela officiated in the Africa Cup of Nations final, where Senegal beat Egypt on penalties in Yaounde, Cameroon, in February. Gomes received plaudits and went viral globally for his handling of a flashpoint moment with Egypt’s striker Mohamed Salah where the referee offered the Liverpool star his whistle.

With Al Ahly’s 4-0 semifinal first leg win against ES Setif on Saturday Pitso Mosimane remains on track for a record that would set him apart in ...
Sport
3 months ago

Wydad were Mosimane’s nemesis when, as coach of Sundowns, the Moroccan giants regularly thwarted Mosimane’s attempts to add to his 2016 Champions League title with the Brazilians. Mosimane appeared to shake his hoodoo when Ahly dismantled Wydad 5-1 on aggregate in the 2019-2020 Champions League semifinals.

Mosimane’s relationship with Wydad is also love-hate as the fans of the club once cheered the name of the then-Sundowns coach on-field at Stade Mohamed V after a 0-0 Champions League group stage draw in December 2019.

Mosimane is seeking to become the first coach to win three Champions League titles in succession in Monday’s final.

Victor Gomes is the No.1 referee in Africa at present and it would be a surprise if he is not selected to officiate at the 2022 Fifa World Cup in ...
Sport
5 months ago

"'Penaldinho' has come and gone," Victor Gomes says of his transition from someone once regarded as the robust, awkward duckling of SA football ...
Sport
6 months ago

Victor Gomes says he assessed the situation and found a way to "manage a top-class player in a way I thought would be deemed appropriately ...
Sport
6 months ago

Al Ahly coach Pitso Mosimane will launch a schools soccer programme this year as part of his plan to give back to the sport in SA, his management ...
Sport
2 months ago