Seven players who sparkled during the DStv Premiership season 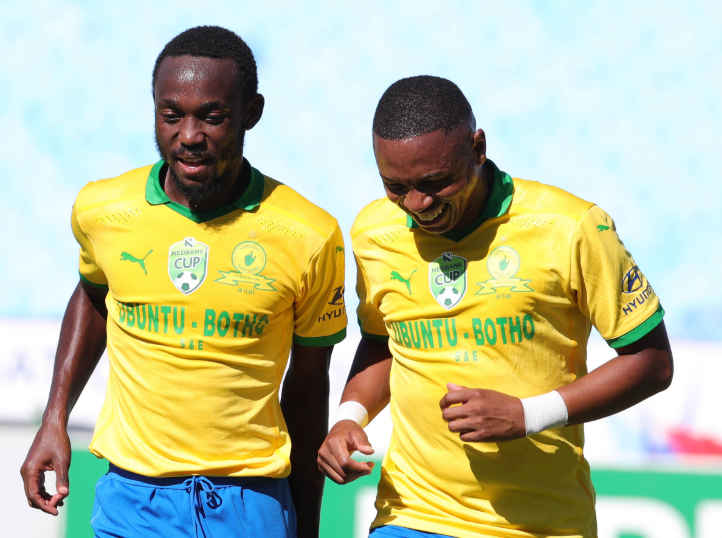 Mamelodi Sundowns duo Peter Shalulile (left) and Andile Jali are among the players who had a good DStv Premiership season.
Image: Samuel Shivambu/BackpagePix

The DStv Premiership season will come to an end on Monday after another dominant performance by Mamelodi Sundowns with their unprecedented fifth successive championship.

The final round was this past weekend, with Orlando Pirates still to play two matches due to reaching the Caf Confederation Cup final.

TimesLIVE looks at seven players who dished out sparkling performances and stood head and shoulders above their peers in SA in 2021-2022.

One of the contenders for the Player’s Player, Footballer of the Season and MTN8 Last Man Standing prizes in the PSL Awards, the Namibian hitman has been outstanding.

He ended the DStv Premiership campaign as the leading scorer with 23 goals, two shy of Collins Mbesuma’s record that has stood for 16 years, and a contribution of five assists.

With his eye-catching performances in the heart of the Buccaneers' defence in his debut season in the Premiership the physically imposing Ndah has drawn glowing comparisons to Bucs' 1990s Gabonese defendsive stalwart Guy-Roger Nzeng.

If not for injures, the lanky Nigerian could have made more than 27 appearances for Pirates in all competitions this season, where Nigerian was a key player as Bucs reached the Confed Cup final.

The plaudits often go to playmakers such as Themba Zwane, but "Gattuso" played the crucial water-carrier role in the heart of Sundowns' midfield with Rivaldo Coetzee, whose season was cut short by injury.

To underline his importance, Jali has been nominated in the categories of Player’s Player, Footballer of the Season, MTN8 Last Man Standing, Nedbank Cup Player of the Tournament and Midfielder of the Season.

Jali made 22 appearances in the league with his contribution far more than his one goal and one assist, and he was disciplined, having collected two yellow cards in a position that requires physical confrontation.

That Cape Town City are in contention to qualify for the Caf Champions League next season is largely due to the immense contribution of playmaker Mduduzi Mdantsane.

In the league, Mdantsane has been instrumental with 26 appearances where he made a telling contribution of nine goals, but he was thin when it comes to assists, with only one.

He is one of the contenders for the the Premiership's Midfielder of the Season award where he faces tough competition from the Sundowns duo of Andile Jali and Themba Zwane.

Another solid campaign for the Sundowns playmaker who was a vital cog in their attack as they lifted the MTN8 and the Premiership with four matches to spare.

Mamelodi Sundowns got the victory they would have craved to lift the DStv Premiership trophy in style, but had to fight for every inch of it in a ...
Sport
1 month ago

In the league, “Mshishi” made 25 appearances with five goals and seven assists and he is one of the contenders for the Player’s Player and Midfielder of the Season awards.

The Angolan goalkepeer has been a revelation for Cape Town City this season and is one of the reasons they are in contention to finish second in the league.

His numbers between the poles are hugely impressive with 28 appearances where he conceded 23 goals and kept an impressive 15 clean sheets and he was disciplined with no yellow cards.

For his efforts, Marques has been nominated for Goalkeeper of the Season where he faces tough competition from Veli Mothwa of AmaZulu and Toaster Nsabata of Sekhukhune United.

Chiefs underwhelmed by finishing outside the Caf Champions League and Confederation Cup places and without a trophy for another season, but Dolly was among the few shining lights.

A key part of the Chiefs attack where his reunited with ex-Sundowns teammate Khama Billiat, the winger made 26 appearances in his return to the Premiership from four-and-a-half seasons spent with Montpellier in France. Dolly contributed eight goals and four assists.

Tightest race in years: Zwane, Jali and Shalulile chip for Player of the Season

The former have been pulling strings in the heart of midfield, while Shalulile is chasing Collins Mbesuma’s 25-goal record
Sport
1 month ago

Bafana Bafana coach Hugo Broos has named his 23-man squad for next month’s 2023 Africa Cup of Nations qualifier against Morocco in Rabat.
Sport
1 month ago