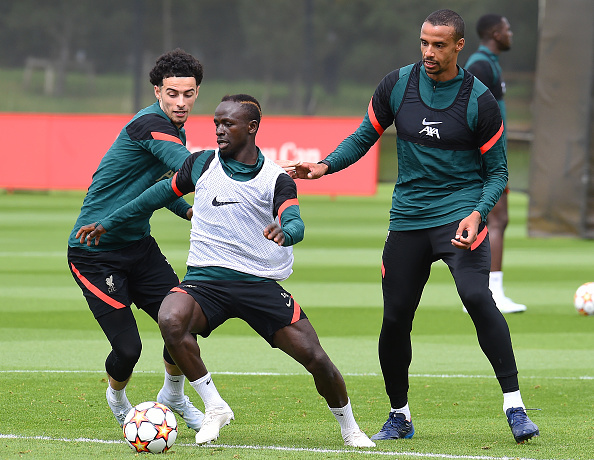 Liverpool and Senegal star Sadio Mane challenged by Curtis Jones (left) and Joel Matip during their training session at AXA Training Centre on May 25 2022 in England.
Image: John Powell/Liverpool FC via Getty Images

Mane, who joined Liverpool in 2016 and has scored more than 120 goals for the Premier League club, was considering leaving Juergen Klopp's side in search of a new challenge, British media reported.

“This question I will answer after the Champions League [final], if I'm staying or not,” Mane, who has one year remaining on his contract, told Sky Sports.

“What I want to say now is I am fully focused on the Champions League and winning it, which is far more important for me and the Liverpool fans.

The 30-year-old underlined his full commitment to Liverpool for the final, which is a rematch of the 2018 title decider won 3-1 by Real Madrid in Kyiv.

“I will do everything absolutely possible to win the game for Liverpool,” Mane said.

“I think we all forgot about what happened in 2018. For sure, Real Madrid were the better team then and deserved to win the game, but it is going to be a different game.”

Mane is among the favourites for this season's Ballon d'Or after leading Senegal to victory in the Africa Cup of Nations and winning the League Cup and FA Cup titles with Liverpool.

He said he would be delighted to become the first African to win the prize since Liberia's George Weah in 1995.

Asked whether he thought African players were ignored in the voting process, Mane said: “It's true, which is sad.

“This cup, the Africa Cup of Nations, is the biggest trophy I have won in my life. For me it would be even more special to have another bonus, which is the Ballon d'Or, and I would be the happiest player in the world.”

The nominees will be announced on August 12 and the winner declared on October 17.

Missing out on the Premier League title on the last day of the season has given Liverpool an extra edge heading into the Champions League final, ...
Sport
1 month ago

Manchester City celebrated their fourth Premier League title in five years in spectacular style on Monday as fans thronged the streets of the city to ...
Sport
1 month ago