Ancelotti hoping Real's best will be enough to beat Liverpool 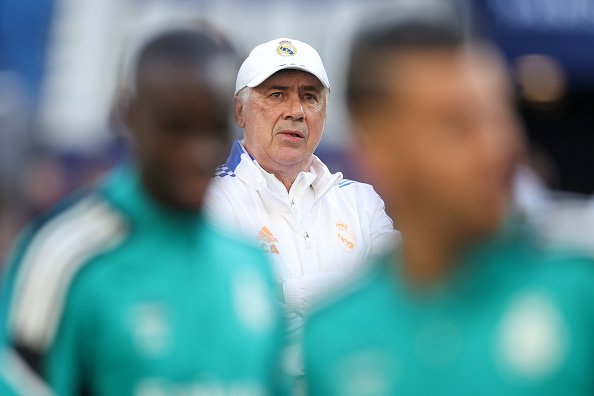 Real Madrid manager Carlo Ancelotti during his team's training session at Stade de France on 27 May 2022 ahead of the Champions League final against Liverpool.
Image: Robbie Jay Barratt - AMA/Getty Images

Real Madrid manager Carlo Ancelotti hopes his team can be at their peak to give them a chance of winning Saturday's Champions League final against Liverpool at the Stade de France but is pragmatic enough to know that may still not be good enough.

Liverpool are unbeaten since March, have lost just three games this season and have already claimed two domestic cups, though they just missed out on the Premier League title, while Real romped to the LaLiga crown with a month to spare.

“I think we are in a great moment and will do our best to win on Saturday but sometimes your best isn't enough to succeed,” Ancelotti told a news conference on Friday.

“Soccer is about intangibles that sometimes you can't control. We deserved to get to the final but to win it it's not about what you did before, it's about what happens on the pitch during the big game.

“We have to plan a game where we can show our qualities. The collective commitment, the individual quality and the impact that the substitutes make in important moments. The game will be won by the team who manage to fit the game to their strengths.”

Ancelotti said that in his four previous Champions League finals as a manager — becoming the first coach to win the European Cup three times with two different clubs — the one he could not forget was AC Milan's 2005 loss to Liverpool.

The Reds had seemed out of contention but came from three goals down at halftime to level before winning a shoot-out.

“That team was probably the best I've coached in a final,” Ancelotti said ahead of a game in which he will make history by being the first to manage in five Champions League finals.

The Italian is also on the verge of leapfrogging Bob Paisley and Zinedine Zidane to become the first manager to win the European Cup four times.

“Unfortunately, in football there is that unpredictability that you cannot control. It's difficult to explain,” he added.

“Just like it's hard to explain how we scored twice in one minute from the 90th minute against (Manchester) City (to win 3-1 in the second leg of this year's semifinal).

“These things happen and you have to accept it. You don't have to think about it too much either. Football always offers a chance for redemption and that happened two years later (when Ancelotti's Milan side won the 2007 final against Liverpool).”

Missing out on the Premier League title on the last day of the season has given Liverpool an extra edge heading into the Champions League final, ...
Sport
2 months ago

Saturday's game gives Liverpool a chance of revenge for their defeat by Real in the 2018 final and Ancelotti does not think Real will have a fitness advantage despite having time to rest key players after wrapping up the LaLiga title early.

He recalled that his 2014 Real team arrived at the final with several injured players and still managed to beat local rivals Atletico Madrid.

“Liverpool will try to impose an intense game, with a lot of verticality (quick transitions) ... We have to be ready to respond at the highest level,” said Ancelotti.

Manchester City celebrated their fourth Premier League title in five years in spectacular style on Monday as fans thronged the streets of the city to ...
Sport
2 months ago

Manchester City manager Pep Guardiola hailed his team as “legends” after they won their fourth Premier League title in five years with a 3-2 comeback ...
Sport
2 months ago