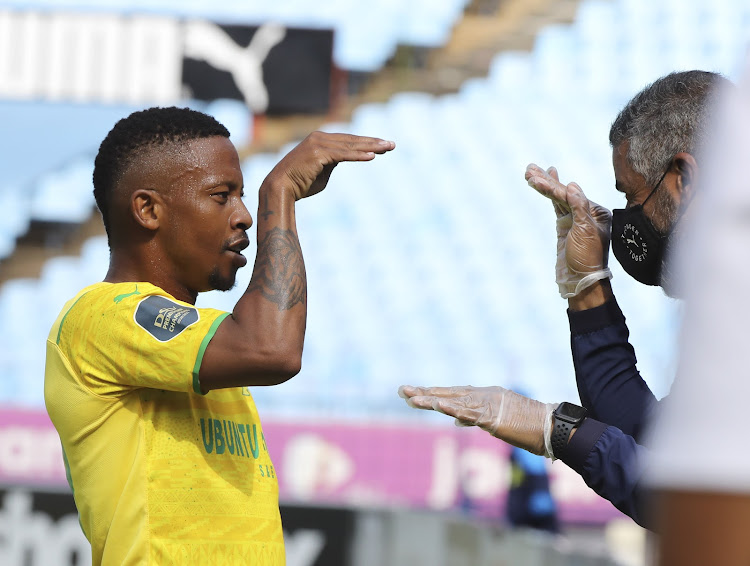 Thabiso Kutumela of Mamelodi Sundowns will be looking to add to his tally during the Nedbank Cup final at the Royal Bafokeng Stadium.
Image: Gavin Barker/BackpagePix

Mamelodi Sundowns striker Thabiso Kutumela has urged his teammates not to underestimate Marumo Gallants during their Nedbank Cup final at the Royal Bafokeng Stadium in Rustenburg.

The Brazilians are on the verge of completing a rare domestic treble in this match after they lifted the season opening MTN8 and the DStv Premiership with four matches to spare.

“What we have to do is to respect Marumo Gallants and not undermine them even though they haven’t managed to make it into the top 8 in the league,” said the attacker.

“They’ve had a good season and were consistent in the Nedbank Cup, they are not here by luck. They’ve worked hard. We have to respect them in order to win our game and take our chances.”

Kutumela, who has scored two goals in the competition this season where the Brazilians have found the back of the net 17 times in four matches, will be looking to add to his tally.

“In the final, there has to be a winner, so I’m ready to do whatever it takes to help the team win this game so that we can win our third trophy this season and complete the domestic treble.”

Kutumela also reflected on the club’s journey in the tournament so far.

“Our journey as Mamelodi Sundowns in the Nedbank Cup this season has been a very good one. We have always taken it one game at a time. We were focused on winning each game as it came and we respected the opponent no matter where they were from — even a team from the SAB. We remained professional throughout.

“What I’ve learnt from the Nedbank Cup is that there’s no draws and teams can’t take one point each. There has to be a winner and if you respect your opponents whether they’re from the NFD and play according to the coaches instructions then you can win all the games and that’s how we were able to win our games to reach the final,” he concluded.

Sundowns' Mngqithi: Gallants have ‘one of the most dynamic midfields in SA’

As they stand on the cusp of a rare domestic treble, Mamelodi Sundowns coach Manqoba Mngqithi has given rare insight into to how he managed to ...
Sport
1 month ago

Such is the confidence of Marumo Gallants that they are already planning for the Caf Confederation Cup next season.
Sport
1 month ago