AmaTuks eager for PSL return as playoffs get under way 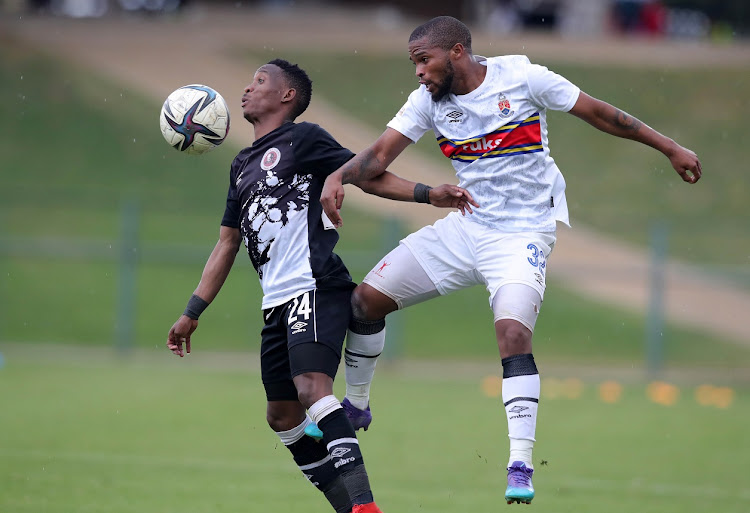 Raymond Daniels of Hungry Lions is challenged by Siyanda Msani of University of Pretoria in Tuks' final game of the 2021-22 GladAfrica Championship, where the Tswhane team finished second.
Image: Samuel Shivambu/BackpagePix

University of Pretoria FC have been quietly going about their business, fine-tuning their preparations ahead of the promotion-relegation playoffs that will kick off on Sunday.

AmaTuks missed out on automatic promotion to the PSL after finishing second in the GladAfrica Championship (also known as the National First Division, or NFD), two points behind champions Richards Bay. They will battle it out for the last promotion spot against Swallows FC, who finished 15th in the DStv Premiership, and Cape Town All Stars, who were third in the NFD.

On Sunday, Tuks will open their playoffs account against All Stars at the Athlone Stadium in what will be a tricky outing for Tisane Motaung's lads.

A positive start will boost the Tshwane team a great deal in their quest to return to the PSL. The 2008-09 Nedbank Cup finalists were relegated from top-flight football in 2015-16.

“It is in the hands of the players. We found ourselves in the playoffs because we could not go all the way and win number one,” Motaung told TimesLIVE.

“The preparations have gone well because we need to plan well to overcome both All Stars and Swallows. The boys have to put up a fight — it’s a big opportunity for them and for their careers. I have been speaking to them every day.

“We dropped key points unnecessarily and that’s why we find ourselves in this situation. We threw away points in the away our games against All Stars and JDR Stars.

“We also dropped valuable points against Hungry Lions at home and had it not been for all these lost points lost we could have been at the top of the table. We would be talking a different story and it really killed our journey.”

After Sunday’s game, AmaTuks will get a break to closely watch Swallows against All Stars at Dobsonville on Wednesday. They will be back in action when they host the Dube Birds at Tuks Stadium on Saturday

“The playoffs are a big lifeline for Swallows to remain in the PSL. It’s a big opportunity for them and they are going to throw all their missiles at us,” Motaung said.

“But we are going to be ready. Our preparations have been going very well. If we are not prepared, then maybe we should not be here.”

Mamelodi Sundowns co-coach Manqoba Mngqithi believes KwaZulu-Natal will benefit from the province having five teams in the Premier Soccer League ...
Sport
1 month ago

Richards Bay FC ensured their promotion to the DStv Premiership from the GladAfrica Championship on Sunday even though they were held to a 0-0 draw ...
Sport
1 month ago