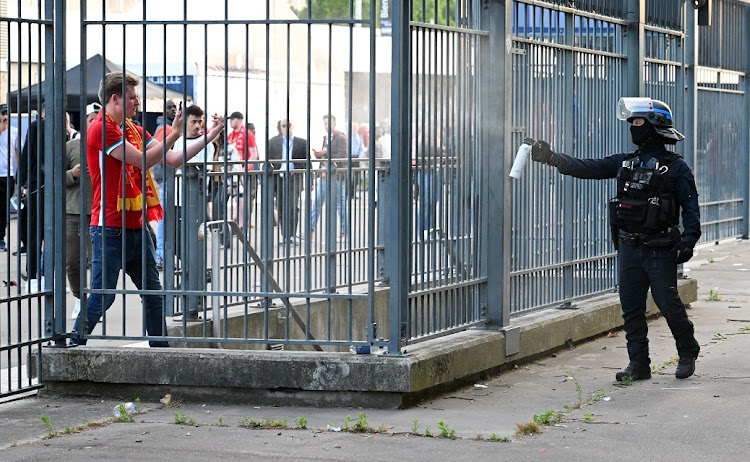 Police spray pepper spray at Liverpool fans outside the stadium prior to their team's Uefa Champions League final against Real Madrid at Stade de France in Paris on May 28 2022.
Image: Matthias Hangst/Getty Images

Liverpool chairperson Tom Werner has demanded an apology from the French sports minister after she said fans with fake tickets and the club's handling of their supporters were responsible for the trouble that marred Saturday's Champions League final.

The match at the Stade de France, which Real Madrid won 1-0, was delayed by more than half an hour after police tried to hold off people trying to force their way into the ground. Some fans, including children, were tear-gassed by French riot police.

On Monday, sports minister Amelie Oudea-Castera said that the initial problems were caused by Liverpool fans without valid tickets and accused the club of letting their supporters “out in the wild”.

French interior minister Gerald Darmanin added that there had been a “massive [ticket] fraud on an industrial scale”.

Werner hit back late on Monday in a letter to Oudea-Castera, describing her comments as “irresponsible, unprofessional, and wholly disrespectful” to the fans affected.

“The Uefa Champions League final should be one of the finest spectacles in world sport, and instead it devolved into one of the worst security collapses in recent memory,” Werner was quoted as saying by the Liverpool Echo newspaper.

“On behalf of all the fans who experienced this nightmare I demand an apology from you, and assurance that the French authorities and Uefa allow an independent and transparent investigation to proceed.”

Uefa has commissioned an independent inquiry into the incident while Oudea-Castera said they would produce a report within 10 days.

In an interview with Liverpool FC's website, CEO Billy Hogan said they were also reviewing legal options available to them on behalf of their supporters. Hogan said later on Tuesday that the club had received over 5,000 responses after asking affected fans to fill out a form as they sought evidence.

“It's also important we don't lose sight of what happened after the match.

Hogan said he had also asked Uefa for their match day log to take a look at medical incidents recorded so they can reach out to those respective supporters.

France's sports minister said on Monday that Liverpool fans without valid tickets were responsible for the initial crowd problems at the Champions ...
Sport
2 months ago

Liverpool deserved more from their losing Champions League final against Real Madrid on Saturday after dominating the match but they will be back to ...
Sport
2 months ago

Vinicius Jr crowned his breakout season by scoring the goal that won Real Madrid a record-extending 14th European Cup title with a 1-0 win over ...
Sport
2 months ago

Vinicius Junior's second half tap-in steered Real Madrid to a 1-0 victory over Liverpool in the Champions League final on Saturday for the Spanish ...
Sport
2 months ago