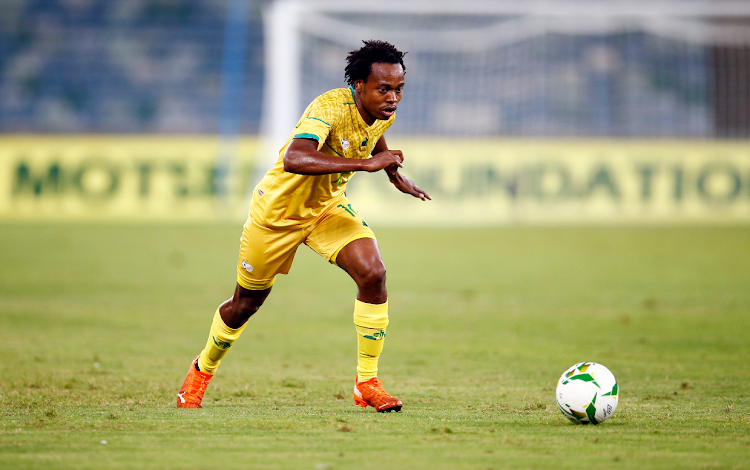 Percy Tau is one of the players Bafana Bafana will rely on in their Afcon qualifier opener against Morocco on Thursday.
Image: Steve Haag/Gallo Images

While Bafana Bafana, for the first time in a while, are expected not to have a tough time qualifying for the 2023 African Cup of Nations (Afcon), Morocco will be a real test for Hugo Broos’ men.

Group K has been left with only three teams, including Liberia, after Zimbabwe were barred from participation in the qualifiers due to a Fifa suspension related to government interference in the sport.

This means if 69th-ranked Bafana beat minnows Liberia, ranked 149th,  home and away they will book their spot at the continental showpiece to be staged in Ivory Coast in June and July next year.

While their qualification path was made easier by Zimbabwe’s expulsion, Morocco are an opponent Bafana need right now.

Broos has been preaching that he doesn’t want to play easy teams and Morocco — ranked 24th in the world and second in Africa — definitely don’t fall in that category. The Belgian tactician will be able to assess how far his team has grown through the clash.

The North Africans, who reached the quarterfinals of the Nations Cup in Cameroon early this year, have announced a strong squad including a number of their European-based stars.

Mamelodi Sundowns defender Grant Kekana, a first-time call-up, has pleaded with South Africans to be patient with Bafana while Broos tries to build a young team.

“I would like our supporters to stay positive and be patient with us — we are a young group but we have done well,” Kekana said. “Even though we were unfortunate not to qualify for the World Cup, we are a good group of players and a group that is willing to represent the country well and won’t leave anything on the field.”

Kekana believes SA have prepared well for the Moroccans.

“The intensity at training has been good. I think the efforts the lads have been putting in has been good and everyone has been raising their hands,” Kekana said.

“It’s difficult to see who is going to start, but it’s good to see that everyone is in good spirits and willing to push and represent the country well.”

Al Ahly star Percy Tau will be the key player in attack for SA as they attempt to break down Morocco’s notoriously robust and organised defence.

‘Baseless’: Caf hits back at Mosimane comments on ruling body and Motsepe

The Confederation of African Football has hit back at Al Ahly coach Pitso Mosimane over some of his statements made about the continental ruling body ...
Sport
2 months ago

University of Pretoria (Tuks) and Cape Town All Stars played to an exciting 1-1 draw during their promotion play-off clash at Tuks Stadium in Tshwane ...
Sport
2 months ago