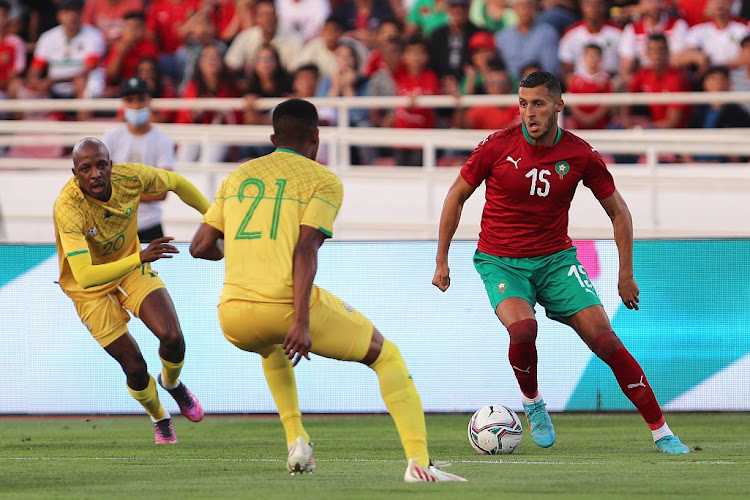 Selim Amallah of Morocco attempts to get past Bafana Bafana's Grant Kekana in the 2023 Africa Cup of Nations qualifying match at Stade Prince Moulay Abdallah in Rabat, Morocco on June 9 2022.
Image: Nour Akanja/BackpagePix

Bafana Bafana spurned a chance to start their 2023 Africa Cup of Nations qualifying campaign with a tough away draw or even a win when they gave away a first-half lead to lose 2-1 to Morocco at Stade Prince Moulay Abdellah in Rabat on Thursday night.

Lyle Foster's eighth-minute opening goal looked like it might give the 69th-ranked South Africans a chance at shocking 24th-ranked Morocco. But Bafana allowed the Atlas Lions, who are ranked second in Africa, to find the equaliser through ace striker Youssef En-Nesyri in the 51st minute before Ayoub El-Kaabi combined with fellow substitute Amine Harit to blast in the winner three minutes from time.

Coach Hugo Broos' SA had to ride their luck at times, and captain Ronwen Williams often kept Morocco at bay as the last line of defence in goal with some excellent saves. But a fighting performance in front of a 45,000 crowd against quality north African opposition should boost Bafana's confidence in the three-team Group K, where wins against 149th-ranked Liberia should see SA over the line to qualify for Ivory Coast 2023.

Bafana took the lead against the run of play, debutant Sphephelo Sithole feeding Foster with a brilliant through-pass down the middle of the pitch. The young Belgian-based Bafana striker fended off a defender before beating Morocco goalkeeper Yassine Bounou with a well-taken strike for his first goal in national team colours.

A “late cancellation” by Iran has left Bafana Bafana without a friendly match to play in the June Fifa international date, SA Football Association ...
Sport
2 months ago

Williams was easily the busiest keeper in the first half with a string of good saves, mainly from En-Nesyri and strike partner Tarik Tissoudali.

Bafana's defence was struggling to cope with Achraf Hakimi's runs and supply of dangerous balls down the right flank where SA left back Lyle Lakay and debutant centreback Taariq Fielies were caught for pace.

Portugal-based Sithole was, however, impressive for Bafana in the middle of the park where he was playing with Orlando Pirates' Goodman Mosele, who at times was a little slower than the pace of the game.

The home side came back strongly in the second half and were rewarded when En-Nesyri, who plays for Sevilla in Spain's La Liga, nodded home Ghanem Saiss' pass. The goal came as Bafana's players became spectators, allowing Sofian Amrabat's diagonal ball to reach Saiss unchallenged inside the area.

SA will host Liberia in their second qualifying match on September 19 and travel to face the same opponents away on September 22. The team that gets the most points in those two games is likely to qualify alongside group heavyweights Morocco.

Broos had wanted SA to play a friendly against Iran on the way back from Morocco in Doha, Qatar on Monday but those plans fell through when Iran pulled out at the last minute.

While Bafana Bafana, for the first time in a while, are expected not to have a tough time qualifying for the 2023 African Cup of Nations (Afcon), ...
Sport
2 months ago

'Think about your children': Brian Baloyi's impassioned appeal to Safa

How Bafana star Hlongwane's tough upbringing motivates him at US club

There have been plenty of tough moments for Bafana Bafana’s young striker in his first six months playing thousands of kilometres from home, ...
Sport
2 months ago