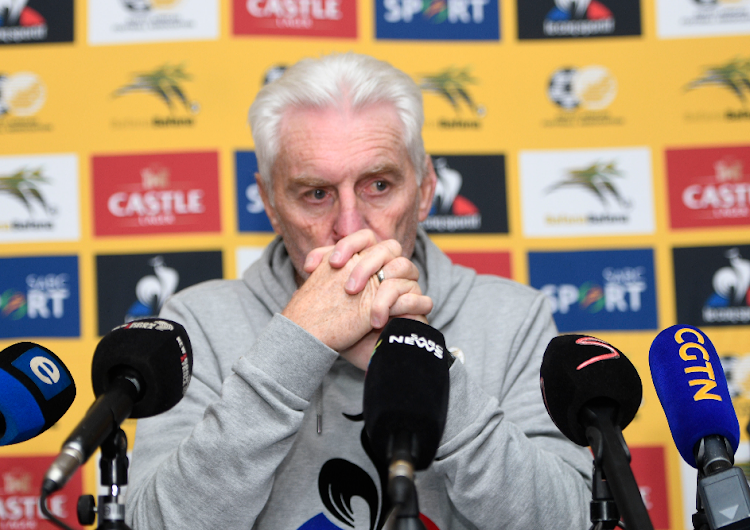 Coach Hugo Broos will have no excuses if Bafana don't make it to the 2023 Afcon since we only have to beat Liberia to qualify.
Image: Sydney Mahlangu/BackpagePix

Bafana Bafana coach Hugo Broos said he was not disappointed with the team's performance in the defeat to Morocco during the 2023 African Cup of Nations (Afcon) qualifiers.

Bafana threw away their 1-0 lead to lose 2-1 to the North African side in a Group K fixture at Stade Prince Moulay Abdellah in Rabat on Thursday night.

Lyle Foster scored for SA after eight minutes of play before Youssef En-Nesyri equalised for the hosts after 51 minutes and Ayoub El-Kaabi netted the winner three minutes from time.

Broos said while it is disappointing to lose the match, he believes the performance was fine.

“For a moment I thought we could win the game and after the first goal we conceded, I thought I would still be happy with one point and they got the second goal close to the end of the game. It’s just disappointing,” said Broos.

While Bafana Bafana, for the first time in a while, are expected not to have a tough time qualifying for the 2023 African Cup of Nations (Afcon), ...
Sport
3 weeks ago

The Belgian coach said Morocco has given them an idea of what to do when they resume the Afcon qualifiers with back-to-back matches against Liberia in September.

“We now know what to do in September. I was not disappointed with the performance. We fought and we played against a very strong Moroccan team. That was good and let’s hope we can do it in September twice with two victories,” Broos said.

If Bafana beat Liberia in both matches, SA will seal their qualification for the Afcon staged in Ivory Coast next year.

This after Zimbabwe were barred from participation in the qualifiers which left Group K with three teams, namely SA, Morocco and Liberia.

The top two finishers in the group will automatically qualify for the finals that will involve 24 nations in the West African country.

Liberia are going to play their home games in Morocco as they don’t have a stadium that meets the Confederation of African Football (Caf) standards.

SA have expressed their discontent over Liberia playing their home games in Morocco while they are in the same group.