CT All Stars beat Swallows to give promotion advantage to Tuks 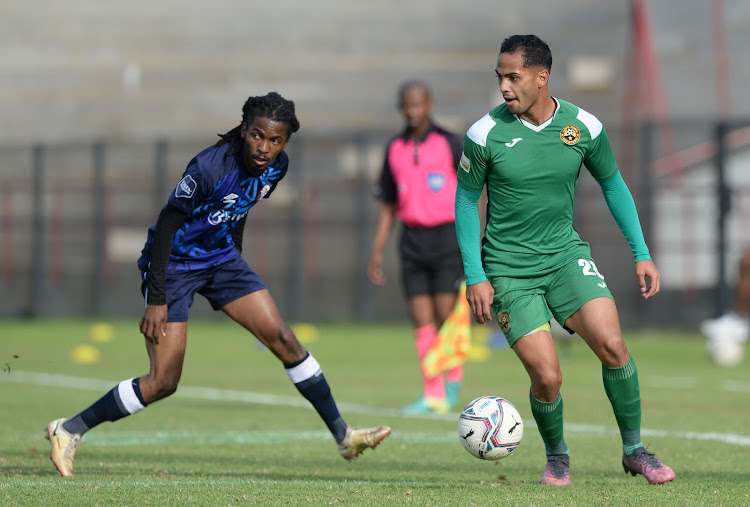 Sirgio Kammies of Cape Town All Stars is challenged by Kamohelo Mahlatsi of Swallows during their promotion playoffs match at Danie Craven Stadium in Stellenbosch on 11 May 2022
Image: Ryan Wilkisky/BackpagePix

This after Cape Town All Stars pulled off a dramatic 2-1 victory against Swallows in their PSL promotional playoff at the Danie Craven Stadium in Stellenbosch on Saturday.

Grant Margeman gave Swallows an early 1-0 lead with a long-range piledriver and handed them an advantage in their push to stay in the DStv Premiership but All Stars fought back gallantly.

Late goals by All Stars' Ronaldo Maarman and Ndiviwe Mdabuka, the latter from a penalty, gave Stars their first victory in these playoffs while at the same time handing the advantage to Tuks.

It was a low-key return for Bafana Bafana as they touched down with no fanfare and a single sound of the vuvuzela at OR Tambo Airport on Saturday ...
Sport
3 weeks ago

Despite their win All Stars finished at the bottom of the three-team log but did Tuks a huge favour as they now need to draw against Swallows in their last match at the Lucas Moripe Stadium on Wednesday to gain promotion to the top flight.

Swallows, who avoided straight relegation by finishing 15th in the Premiership, will have to beat Tuks on Wednesday to avoid relegation — two seasons after they were promoted.

Stars started this encounter already out of contention for promotion after they failed to win their first three matches.

A win or draw for Tuks against Swallows on Wednesday will mean they'll return to the top flight for the first time after they were relegated in the 2015-16 season.

12 years on: Tshabalala remembers his goal that got 2010 FIFA World Cup under way

It may be 12 years since Siphiwe Tshabalala scored that magnificent goal against Mexico in the opening match of the 2010 FIFA World Cup at FNB ...
Sport
3 weeks ago