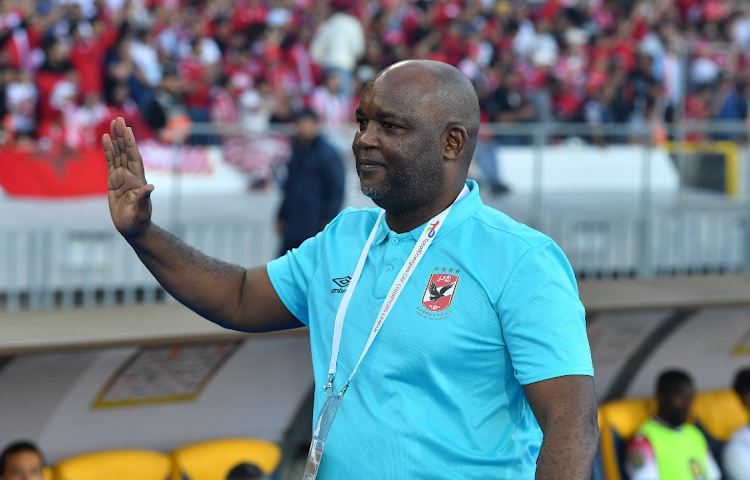 Many were sceptical that Pitso Mosimane would last more than six months when he made his bombshell move from Mamelodi Sundowns to the continent's biggest and most successful club, Al Ahly, in late September 2020.

He proved his doubters wrong and more.

The previous time a coach moved from the Premier Soccer League to Egypt had been when Milutin Sredojevic left Orlando Pirates for Zamalek in August 2019, and the Serb lasted two-and-a-half months.

But with the Red Devils not having won the trophy they covet most, the Caf Champions League, for seven years, Mosimane had been specifically headhunted by Ahly president Mahmoud El Khatib for his ability in that competition, which he had won with Mamelodi Sundowns in 2016. The coach had transformed the Brazilians into regular knockout stage competitors.

And Mosimane did bring Ahly trophy and international success. TimesLIVE has compiled a timeline of the former Bafana Bafana coach's stay in Cairo:

Many did not believe the story when TimesLIVE broke it early on the morning of that day, until it was confirmed by both clubs about 1pm.

TimesLIVE reported: “He was apparently approached after he delivered Sundowns' 10th Premiership title on a dramatic final day of the season in which the Brazilians overtook Kaizer Chiefs who had been in the driving seat of the title race all season.”

The title had been wrapped up by Mosimane's predecessor Rene Weiler, but the South African steered his new team to two wins and a draw at the end of the Covid-19-extended season and collected a winner's medal.

Pitso Mosimane has left Egyptian giants Al Ahly after the serial Caf Champions League winner and the club reached an agreement on Monday to go their ...
Sport
3 weeks ago

Ahly beat bitter rivals Zamalek 1-0 in the final at Cairo International Stadium, which went a long way solidifying Mosimane's new tenure. He had steered Ahly through the semifinals with an impressive 5-1 aggregate win against Wydad Casablanca. It was Ahly's first Caf Champions League success in seven years, making them nine-time winners.

Al Ahly beat Tala'ea El Geish 1-0 in the final. Mosimane had steered the Devils through the quarterfinals and semifinals. Mosimane's third trophy in Egypt must have broken a world record — it made for six in the Covid-19-affected 2019-20 season as he had wrapped up a treble with Sundowns before leaving for Ahly, as the SA season ended before Egypt's.

Mosimane's team beat Brazil's Palmeiras 3-2 on penalties after a 0-0 draw in the third-place playoff to match their best finish of third at the Covid-19-delayed 2020 Club World Cup in Qatar. Ahly had beaten host club Al Duhail 1-0 in the second round and lost 2-0 to formidable Bayern Munich in the semifinals.

TimesLIVE reported: “It was disappointment for South Africans at the defeat for Chiefs. But that disappointment was balanced to a large degree by Mosimane entering the pantheon of African coaching legends. He earned his third Champions League title.

“Mosimane became only the fourth coach in the 57-year history of the Champions League to win back-to-back titles, matching the feat too of the man considered Ahly’s best coach of the modern era, Portuguese Manuel Jose in 2005 and 2006. Jose won four Champions Leagues, and Mosimane now stands alone in second place on three.”

Ahly followed their league disappointment against Zamalek with a penalties defeat to Tala'ea El Geish in the Egyptian Super Cup, which prompted the club to slap a fine on the players and technical staff.

TimesLIVE reported: “Ahly fined each player, coach Pitso Mosimane and his staff, and director of football Sayed Abdelhafiz 300,000 Egyptian pounds (R280,000) for the defeat.” The fines were later reversed when Ahly beat Zamalek 5-3 in a thrilling league Cairo derby in November 2021.

Al Ahly thrashed Al-Hilal of Saudi Arabia 4-0 in the third-place playoff to collect a second bronze medal in succession. The Cairo club had arrived in United Arab Emirates missing a number of headline players due to Fifa's ridiculous scheduling clash with the Africa Cup of Nations final, where Egypt lost on penalties to Senegal. Ahly still beat Mexico's Monterrey 1-0 in the second round before losing 2-0 against Palmeiras in the semifinals.

May 30 2022 — Ahly lose against Wydad in Champions League final

Ahly miss out on title No.11, and both club and Mosimane on a record third Champions League title in a row, with a 2-0 defeat to Wydad at Stade Mohamed V in Casablanca. The venue of Wydad's home ground was controversial.

Apparently fed up with criticism and with other issues too, after three meetings between club and coach, Mosimane cannot see a way forward, and TimesLIVE breaks the story of his departure after 21 months in charge, having signed a new two-year contract three months previously.

'The end of a wonderful era' but what's next? - Fans pay tribute to Pitso Mosimane after Al Ahly departure

What's next for world-class Pitso?
Sport
3 weeks ago

Al Ahly coach Pitso Mosimane’s manager Moira Tlhagale is on her way to Cairo for the potentially make-or-break meeting between the club's board and ...
Sport
3 weeks ago

Could Pitso Mosimane be on his way out at Egyptian giants Al Ahly?
Sport
3 weeks ago