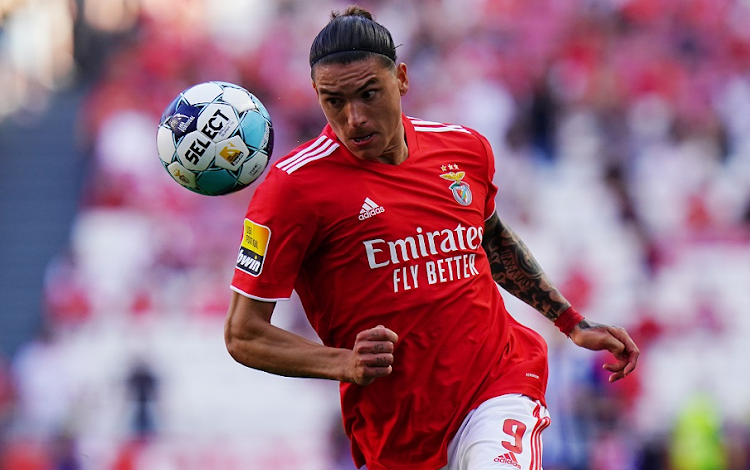 Darwin Nunez turning out for Benfica. The Uruguayan has sigend for Liverpool.
Image: Gualter Fatia/Getty Images

Liverpool have signed Darwin Nunez after the Uruguayan forward completed his medical after his move from Benfica, the Premier League club announced on Tuesday.

Portuguese side Benfica had announced on Monday that an agreement had been reached with Liverpool for the 22-year-old for an initial fee of €75m (R1.25bn).

The transfer fee falls short of the club record £75m (R1.4bn) Liverpool paid for defender Virgil van Dijk in January 2018. However, Nunez's fee could rise to £85m if he reaches individual targets and wins the Champions League.

“I'm really happy and delighted to be here at Liverpool. It's a massive club,” said Nunez, who signed a six-year contract.

“I've played against Liverpool and I've seen them in lots of games in the Champions League, and it's my style of play. There are some great players here and I think it's going to suit my style of play here.

“I hope I can give everything that I've got to help the team. I want to win a lot of trophies at Liverpool.”

Nunez was the top scorer in Portugal's top-flight last season and scored 34 goals in all competitions for Benfica, including strikes in both legs of the club's Champions League quarterfinal defeat by Liverpool. His move is subject to the successful granting of a work permit and international clearance.

Sadio Mane scored a hat-trick as Senegal made a successful start to the defence of their Africa Cup of Nations crown with a 3-1 home victory over ...
Sport
1 month ago

Liverpool chairperson Tom Werner has demanded an apology from the French sports minister after she said fans with fake tickets and the club's ...
Sport
1 month ago

France's sports minister said on Monday that Liverpool fans without valid tickets were responsible for the initial crowd problems at the Champions ...
Sport
1 month ago

Liverpool deserved more from their losing Champions League final against Real Madrid on Saturday after dominating the match but they will be back to ...
Sport
1 month ago