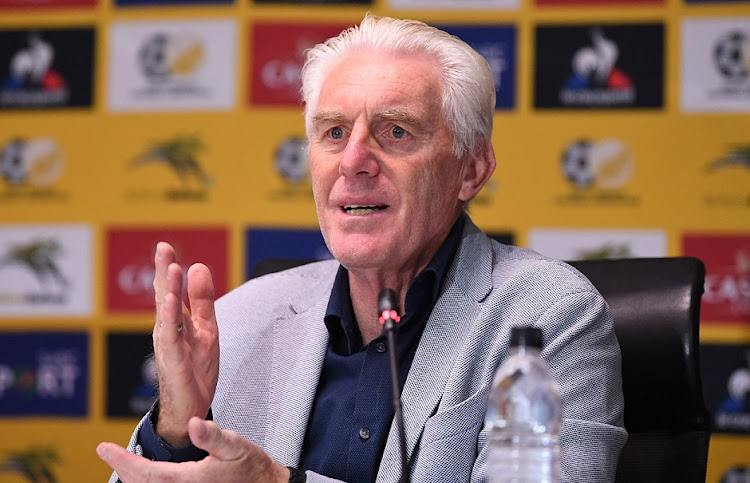 In my humble home language, isiZulu, we say iqiniso liyababa (the truth hurts or tastes bitter or sour). And so it was for many South Africans after hearing what Bafana Bafana coach Hugo Broos had to say about the standard of our football on Tuesday.

The Belgian is telling the truth — period. And the truth that Broos was telling when he said the standard of the Premier Soccer League (PSL) and players it produces is appallingly low is nothing new to some of us who've been following our game closely for decades now.

As writers, analysts and football coaches, some of us talk about the state of our football every day and we make suggestions as to how some of the mishaps can be corrected. But, probably because our names and occupation are not at the level of Broos, few people pay attention.

So I'm glad that a high-profile figure of Broos' stature has added his voice on where we are and what needs to happen in our football. Perhaps it can help shift the powers into realising the extent of the damage they have done and to begin thinking about how they can help rescue the situation.

Greed and selfishness, like we see every day when its comes to our politicians, is part of the problem in SA football. That we have a mother body, the SA Football Association (Safa) that doesn't work in sync with its special member, the Premier Soccer League (PSL), is a crucial element.

The non-existence of a viable relationship between Safa and PSL bosses means serious and honest talk on how our football can be improved never takes place. There's also an issue of who has the ultimate word and power between these two organisations — and that doesn't help when certain matters come to a head.

Take, for instance, the issue of how Mamelodi Sundowns have been dominating the game in SA professional football. If Safa and the PSL had a measure of control over how a club should operate in terms of buying and selling players and fair play, the playing field would have been levelled long ago. That step should be taken, not because we don't want a successful Sundowns, but because we want a league that's competitive and can produce as many good teams and eventually good players as possible who are capable of playing for Bafana.

At the moment we have players like Tebogo Mokoena, who was signed by Sundowns from SuperSport United at a time when he was becoming a regular at Bafana. Because of the number of players in his position at Sundowns, Mokoena has to wait longer to get game time at his club, and in the meantime his national prospects fade.

There are so many examples of players like Mokoena at Sundowns, but while the PSL and Safa have no plan for regulating player movement football suffers.

Broos also spoke about the chaos at the organisation that pays his salary, Safa, raising the issue of the inaction of junior national teams that are expected to produce future Bafana players.

For years Safa has operated without permanent coaches in both the men's and women's junior national teams. Often a temporary coach is roped in to assemble a team whenever there's a vital international match to be played. After that game everyone goes home. That can't be a way to build a strong future Bafana or Banyana Banyana.

And then there were three: Safa at last finalises technical director candidates

After Neil Tovey vacated the job in 2020, the crucial position is yet to be filled
Sport
3 weeks ago

But everything starts with the fact that Safa does little to find sponsors to sustain these junior teams. This is the same Safa that has also failed to ensure that there's regular football being played at every school in SA and that there's proper monitoring, evaluation and promotion of talent at that level.

Safa don't even learn from their rugby counterparts, Saru, who for years have had school programmes like Craven Week that produce future Springbok stars. In football there's not a single programme like that in SA.

That we have a Safa leadership that worries more about taking care of its executive members than ploughing money into football development is a reason why there's no chance of a Craven Week in SA football.

If we're to tackle the problems we have in our football we have to look at the leadership we have. We have to ask if those in leadership have the zeal and energy to carry out their task. If the answer is no then it means we have to find better leaders elsewhere.

But football leaders are not the only ones to blame about the state of the sport. Take our football coaches. When last did you hear of a gathering of top SA football coaches sitting down and coming up with a plan to change how we develop our players.

Like our administrators, our coaches are not talking to and empowering each other. Every coach worries about himself, his job and his next posting if he's lost one. There's no one who cares about the bigger picture, which is SA. It's a pity because we have some great football brains among SA coaches.

Broos has become like a scratched record with his cry for the need to have a meeting with all the coaches of the 16 PSL clubs. That there's no one at Safa or PSL who has taken the initiative to deliver that meeting says a lot about the desire of the administrators, or lack thereof, to improve football.

Football in SA needs a total overhaul, a new thinking and of course new leaders whose main duty will be to empower the coaches and players and to build proper development structures throughout the country.

But we can't do all that when we don't want to admit that Broos is right when he says our standard is poor. First we need to admit that then ask ourselves what do we need to tackle this problem? The time for talk, and for fighting over petty issues instead of producing structures to develop our youth, must end.

Business will never take football leaders seriously when they squabble among themselves in boardrooms. We also need to do away from the shady characters in the game who scare off investors.

Broos was basically saying he alone as a Bafana coach cannot produce miracles. A winning Bafana will only emerge when we've tackled player development. And by player development we must mean everything, not just the talent but the people behind that talent too.

So, yes, let's cool down and stop being emotional about it and begin to think about how as a nation we can begin to improve our situation. And it's only once we've done that, that we can question Broos' logic.

Until then we have zero standing to argue with him.

Was Hugo Broos right, or is he making excuses for bad performances?
Sport
3 weeks ago

Broos said it was time the nation faced "the real problem" of not having enough quality players and a league that was not competitive enough.
Sport
3 weeks ago

In my humble home language, IsiZulu, we say iqiniso liyababa (the truth hurts or tastes bitter or sour). And so it was for many South Africans after ...
Sport
3 weeks ago

Mamelodi Sundowns forward Kermit Erasmus has taken a swipe at Bafana Bafana coach Hugo Broos in response to the Belgian’s comments that the Premier ...
Sport
3 weeks ago