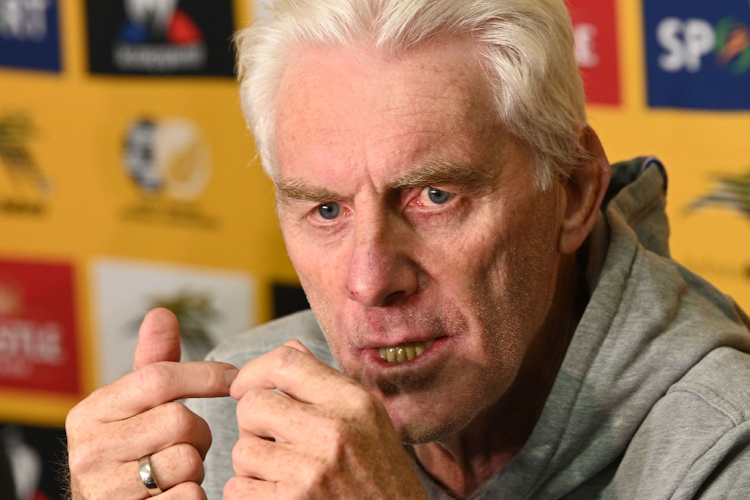 Bafana Bafana boss Hugo Broos got tongues wagging this week when he claimed the level of the PSL is not high enough to guarantee success on the international stage.

Bafana Bafana have struggled for years and the coach dissected the state of SA football on Monday.

“We don’t have players like those of our last three opponents in Ghana, France and Morocco.

“If you look at Ghana, 90% of their [national team] players are based in Europe. When it comes to France I don’t even have to explain because their players play for big European teams.

“We can look at the fantastic race that Mamelodi Sundowns and Orlando Pirates did on the continent but Sundowns lost in the quarterfinal stage of the Champions League and Pirates lost in the final of the Confederation Cup.

“Two Moroccan teams in Wydad and RS Berkane won those competitions and in the Moroccan team there was no player from those teams in the national team except the goalkeeper. Let’s face it, the problem of SA is that the level of the PSL is not high enough.”

Footballer Kermit Erasmus also caused a stir with his comments about the coach.

“Why do we have a coach who doesn’t believe in our talent and league? Sorry for thinking out loud”

Soon social media was flooded with reactions as both Broos and Erasmus made the Twitter trends list.

Here is a look at some reactions:

I understand South African players might feel let down or taken aback by Hugo Broos’ stern words today but serious self introspection is needed. Our best players yo-yo to and from Europe, while many - if not most - are inconsistent in the PSL and in the national team.

HUGO BROOS knows what he is talking about!! He is a serial winner!! South Africans want to defend nonsense so that they can call into radio stations to vent pic.twitter.com/Rn9qapvt3Q

1. What major improvement(s) has Hugo Broos made to Bafana since he joined?

2. Which player has Broos improved since he came here?

3. What element of Bafana's playing style has improved?

4. What is Hugo's first 18 that has been regular? pic.twitter.com/frwm9YUBL1

@robertmarawa this Hugo Broos rant is tiring now. If the working conditions are not conducive for him in SA he must resign period #MSW pic.twitter.com/yapiEBdt3e

But Hugo is telling the truth about the psl. Also current group of players aren’t good enough to actually achieve something. Development side we ain’t producing. How many players who played PSL went abroad? Many don’t even last 3 years playing in Europe

Kermit is frustrated forgetting he made promises of 30 goals,football is about performances worse at international stage .

Hugo Broos is spot on. We all know this except for those who wanna bury their bone heads in the sand. Some clubs have realised this and are cleaning their houses, but clubs can’t carry the association. https://t.co/ACRrrQTc3I

I will go against that. Ngl, the Bafana Bafana 2011-2019 was bad. So now we need a different approach

If the standard is poor then it's poor. The first step to fixing issues is admitting that indeed you have issues.

And then there were three: Safa at last finalises technical director candidates

After Neil Tovey vacated the job in 2020, the crucial position is yet to be filled
Sport
3 weeks ago