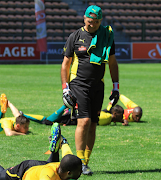 Egypt Football Association (EFA) introduced the ban in 2009 in a bid to develop home-grown shot-stoppers after struggling to find a replacement for the legendary Essam El-Hadary.

El-Hadary, who made his name with Egyptian giants Al Ahly, guarded the poles for Pharaohs until the age of 45.

Heredia believes the adoption of the same strategy might help solve Bafana's goalkeeper crisis while creating healthy competition for the number one spot in the national side.

While the PSL has a number of top goalkeepers, Bafana selectors often struggle whenever they have to pick goalies as most of those playing are not South Africans.

National team selectors have been forced sometimes to even pick goalkeepers that are not playing in their respective clubs.

Except for Bafana and SuperSport United skipper Ronwen Williams, AmaZulu’s Veli Mothwa, Sage Stephens of Stellenbosch and Jody February of Swallows, other local goalkeepers have failed to establish themselves as number ones for their clubs.

“I think the first thing we have to do is to identify the problem. We have got the 16 teams in the PSL with the majority of them, about nine or 10, their number one goalkeepers are foreigners,” Heredia said.

“One of the potential solutions is for the next several years, SA, Safa or whoever it is that is entitled to make the rules, to implement a law that doesn’t allow the use of foreign goalkeepers.

“We saw what happened in Egypt, no foreigner can play in the senior league and they produced a lot of quality goalkeepers. Why not in SA?

“Stop bringing foreign goalkeepers in the PSL and the clubs will be forced to produce local goalkeepers. This is one alternative and my opinion.”

When Egypt FA considered lifting the ban at the beginning of 2021 it was apparently met with hostility from a lot of coaches and was upheld.

The PSL goalkeeper of the season award went to Angola’s Hugo Marques of Cape Town City in the recently finished campaign, while Sundowns’ Dennis Onyango won in the 2020/2021 season.