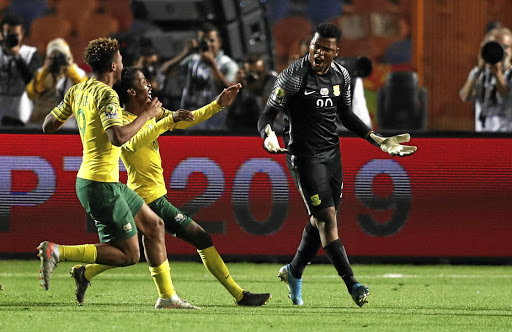 SA goalkeeper Mondli Mpoto celebrates with teammates after winning a penalty shoot-out against Ghana in 2019. Mpoto has struggled for game time in the DStv Premiership.
Image: Reuters

SA Football Association (Safa) president Danny Jordaan believes there's a need to introduce a limit on how many players a club can have in their squad in the Premier Soccer League (PSL) to stop career-ending frivolous signings.

Jordaan believes a squad cap can put an end to the issue of clubs signing every top player and end up not using them or getting enough game time.

The president said several footballers have seen their promising careers stall after being signed by clubs that have big squads as they struggled for game time.

It is extremely disappointing’: Tuks coach Motaung after failure to gain promotion to the PSL

University of Pretoria (Tuks) coach Tlisane Motaung has spoken about the extreme disappointment in their camp after they failed to gain promotion to ...
Sport
2 weeks ago

He said the system will create a space where players have a great opportunity to grow while ensuring good competition in SA football.

Jordaan said this doesn’t only hurt those players, but also comes back to bite national teamsl.

“That’s a simple answer. If I’m in a squad where I know I’m not going to play a single match for a whole year, am I going to be motivated to train every day?”

Jordaan made an example of former SuperSport United goalkeeper Mondli Mpoto, who had a promising career coming through junior national teams.

However, Mpoto, who is in the books at Royal AM, has struggled to make a break in the PSL.

“We have players who came through development structures and they went to represent SA at the U17 Fifa World Cup, U20 World Cup and the Olympics in Tokyo,” Jordaan said.

“Try and trace those players now. Where are they? That’s why I was asking about Mpoto.

“Mpoto had a brilliant future as goalkeeper and what happened to him?”

Some clubs in the DStv Premiership have squads of 40 players.

SA Football Association president Danny Jordaan says he was satisfied Bafana Bafana coach Hugo Broos apologised for his comments on the standard of ...
Sport
1 week ago

GladAfrica Championship clubs owners are still in the dark about why the important preparatory fee was paid in instalments last season and they ...
Sport
2 weeks ago