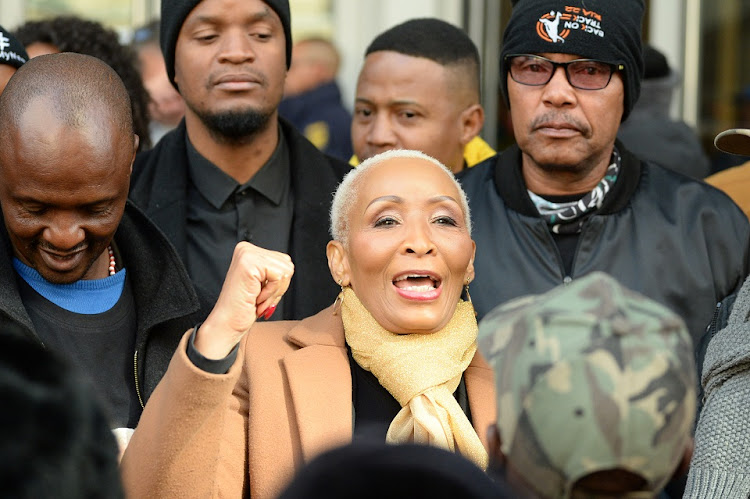 Ria Ledwaba said she will not rest until Danny Jordaan is “out of football” after losing the election battle for the presidency of the SA Football Association (Safa) to the incumbent on Saturday.

Ledwaba continued to allege that constitutional amendments made ahead of the elective congress in a March 24 extraordinary congress were aimed at entrenching Jordaan and the current national executive committee (NEC) in power.

“I knew the odds were against me but I think I fought a good fight,” Ledwaba said.

“I still believe that Safa needs to change. And I believe that I have not lost today — in fact, football has lost a servant.”

Asked to clarify if that statement meant she was leaving Safa, Ledwaba replied: “No, no, I’m not. You’re still going to hear a lot from me.

“Until Dr Jordaan is out of football I will not rest.”

As expected, incumbent Danny Jordaan has won the Safa presidential race by an overwhelming majority over challengers Ria Ledwaba and Solly Mohlabeng.
Sport
1 month ago

She said she meant SA football “has lost somebody who would have brought change”.

“I have said a lot of things that need to be changed. I hope the new executive that is there will make those changes, if they are able to.”

Ledwaba was vetted as not qualifying to run for the NEC by the governance committee. Safa president Tebogo Motlanthe told TimesLIVE the fact that she is no longer on the NEC means Ledwaba, according to the Safa statutes, can no longer be vice-president.

She had served as Safa vice-president from 2018. Given she took Safa to court to try to stop the elections there seems a possibility the association could even make moves to expel Ledwaba from its ranks.

Ledwaba was asked if the election loss means the end of her influence in SA football.

“Not at all. I have got the Ria Ledwaba Foundation in the local communities giving back to football. And that's what I will continue to do — I will never be lost to football.

“There's nothing to be discouraged about [regarding] the election. The election is about winning or losing.

“But it has to be a fair [playing] ground where everybody has got a fair opportunity. But in this election we all know there was no fair ground.

“The constitution, we all know, was changed just to suit certain individuals. But we will continue to fight. I think it is important that Safa should change.”

Ledwaba was asked why she feels so strongly Jordaan has to be unseated as head of Safa.

“I don’t think he's good for our football. I believe he has done his part for all these years he has been in football. But I think you cannot have football that's a one-man show.

“It's the truth. They can say whatever they say but the bottom line is that's how he rules at the association.

Among controversial constitutional changes was one that to stand for the election for the NEC a candidate had to have served at Safa at a regional level or higher for longer than 10 years.

Ledwaba’s camp alleged this was aimed at entrenching the current NEC in place, thus ensuring their loyalty to Jordaan.

Among the NEC, 18 were regional heads. The 52 regions, with four votes each, constitute the biggest section of the vote by far for the NEC and presidency.

Each day that Danny Jordaan, newly elected to a third term as president, spends in office, football dies a slow death.
Opinion & Analysis
1 month ago

SA Football Association (Safa) CEO Tebogo Motlanthe has revealed that two members, who he did not identify, have received death threats.
Sport
1 month ago

The SA Football Association (Safa) elective congress is set to go ahead on Saturday after another attempt to stop it was dismissed by the Pretoria ...
Sport
1 month ago