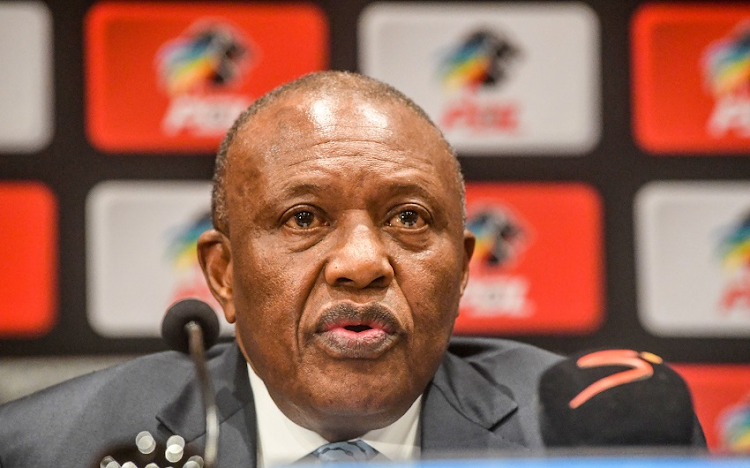 Orlando Pirates boss Irvin Khoza says he will never be at peace until the killer or killers of his club’s former captain and goalkeeper Senzo Meyiwa are found.

Meyiwa was also Bafana Bafana captain at the time of his murder at girlfriend Kelly Khumalo’s house in Volsloorus in October 2014.

Five men — Mthobisi Mncube, Muzikawukhulelwa Sibiya, Bongani Ntanzi, Mthokoziseni Maphisa and Sifiso Ntuli — are on trial for Meyiwa’s killing and the case has been postponed to September. They’ve all pleaded not guilty to the charges.

“We can’t be at peace for the boy who deserved better and gave so much of himself,” Khoza said.

“He had that unfortunate situation with Ajax [Cape Town, in Meyiwa’s first game for Bucs] at Orlando Stadium where he tried to trap the ball [but it went through his legs for a goal].

Soccer stars like Senzo thrown into celebrity lifestyle with no guidance: Marawa

Captaining Pirates and playing for Bafana, his high profile almost compelled him to live the ‘rock star’ lifestyle
Sport
3 months ago

“It could have destroyed anybody, that one. But not him — as if God was saying I’m going to recall this man.”

Khoza said what is being reported in the media has not helped clear the confusion as to what happened when Meyiwa was murdered.

“It’s unfortunate what has happened in terms of what we’re consuming. It’s confusing to all of us.

“We’re asking ourselves, what is it that we don’t know that has taken place to create this sort of confusion from the police to the Hawks, the witnesses, neighbours and the people who were in the house? It’s just confusing.

“I don’t think we deserve that sort of treatment because he was a gentleman and unfortunately it happened at the time he was the captain of my team, captain of the national team.”

Khoza, also chair of the Premier Soccer League, recalled that when Pirates signed Meyiwa he was 13 years old. Khoza said it pained the Bucs owner that he had to return him to his home in Umlazi, south of Durban, when he was no more.

“That’s why when I took him to the family I said to his father [Sam Meyiwa] I’m happy to bring your son but I’m not happy because he’s lifeless, because I took him as 13-year-old boy. I bring him as a captain of the national team and as a national asset.

“I hope they find the culprit as soon as possible. I’ll be at peace.”

Describing Meyiwa's character, Khoza said his mood never changed no matter what the player’s situation was at Pirates.

“He was not the sort of person you’d see with a long face, grumpy, complaining but don’t have solutions. He was not someone who saw wrong in other people.

“He didn’t do that. Even when this thing [his murder] happened he was supposed to be at a party, where we were waiting for him. We were all attracted to him because he was a jolly fellow.

“You see his videos in a car where he’s singing his favourite song [with Khumalo].

"[Thamsanqa] Gabuza never had an agent. That’s why when he left the team [for SuperSport United] I was his agent.

“I said to him I was going to make sure I negotiate a deal for one year. But look how long he’s been there now? It’s because when you do good, you make us your ambassadors.

Senzo Meyiwa was killed at his then girlfriend Kelly Khumalo’s home in Vosloorus on the East Rand in an alleged robbery that shocked the nation.
News
1 month ago

The high court in Pretoria has granted a request by advocate Zandile Mshololo to postpone the Senzo Meyiwa murder trial so she can study the ...
News
1 month ago

Suspects or witnesses? — Defence wants answers on the status of Kelly Khumalo and others in Meyiwa case

Defence counsels for the accused in the Senzo Meyiwa murder trial on Tuesday told the high court in Pretoria they want the director of public ...
News
1 month ago