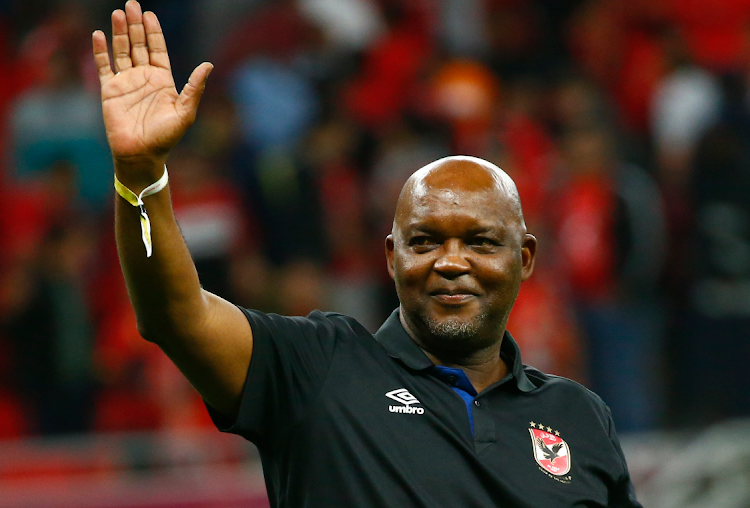 Former Al Ahly head coach Pitso Mosimane has responded to a fan apologising for criticising him during his tenure at the Egyptian football team.

The fan penned an apology to Mosimane on Twitter, saying the criticism was uncalled for.

The apology comes as many fans share their regret at Mosimane's departure. The SA-born coach won the team numerous trophies including back-to-back Caf Champions League titles in 2019-2020 and 2020-2021.

He was 90 minutes away from becoming the first coach to win three Champions League titles in a row and equal former Al Ahly coach Manuel Jose’s record of four titles, but lost to Wydad Athletic last season.

“I'm sorry Pitso Mosimane for criticising you at times on the way you play, but you were hiding the team's flaws in an excellent way and this became clear after you left. I'm sorry, coach,” said the fan.

“Apology is not a fault for anyone. I made mistakes and sometimes criticised coach Mosimane for his way of playing, but he is a great coach with the numbers and championships he won with Al-Ahly. We are happy with what Pitso did with Al-Ahly,” the fan continued.

Responding to the apology, Mosimane said the fan should not regret his departure from the team.

“My brother, please do not regret my departure. Al Ahly did not fire me or push me to go. I have big respect for president [Mahmoud El-]Khatib and the entire board including all the supporters of Al Ahly. I will always cherish all our trophy celebrations,” he said.

@AhmedEissa my brother, please do not regret my https://t.co/oyG3XV4DzN Ahly did not fire me or push me to go. I have big respect for President Khatib and the entire board including all the supporters of Al Ahly. I will always cherish all our trophy celebrations. https://t.co/LlzT7WgJEa

Mosimane also explained his decision to leave the team, saying he needed rest.

“I have memories and archived (banners, chants of me at the stadiums). Unfortunately, I decided to come home. I needed this rest with my family. You now have an experienced European coach everybody should support, and I believe he will leave the jersey at a higher place than he got it,” he said.

Mosimane was replaced by Ricardo Soares.

Speaking to TimesLIVE last month, Mosimane's manager Moira Tlhagale said there was a lot of interest in his services.

“I got a lot of calls from different international and domestic clubs that are interested in coach Pitso Mosimane but it’s important to clarify on the record that we have not signed anything with anyone,” she said.

Confederation of African Football president and tycoon Patrice Motsepe said he would pay for Mosimane to coach Bafana Bafana.

“I love Pitso and I’ve always loved Pitso,” Motsepe said. “He’s got a special place in my heart. I wish him well and wish he could coach Bafana Bafana. I will tell the Motsepe Foundation to subsidise his salary.”

Pitso Mosimane must coach Bafana Bafana and if the SA Football Association (Safa) does not have the money to re-hire Mosimane, who was Bafana’s coach ...
Sport
1 month ago

Confederation of African Football (Caf) president Patrice Motsepe has defended his organisation's decision to have so many Caf events hosted by ...
Sport
1 month ago

Patrice Motsepe: ‘I love Pitso and will always love Pitso’