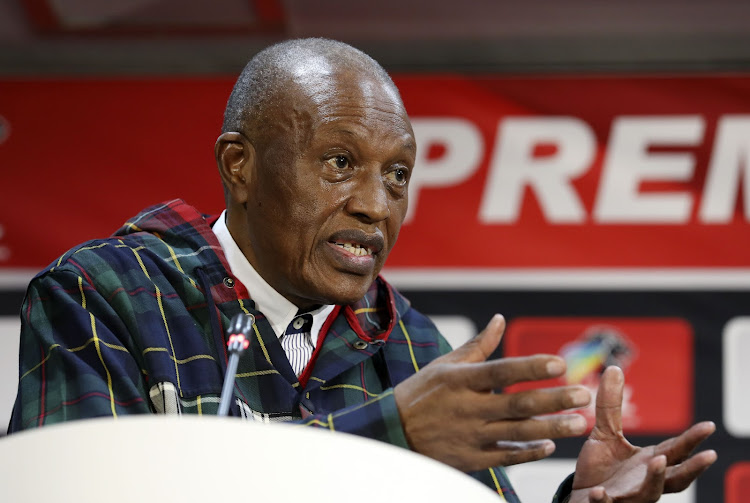 Irvin Khoza, chairman of the PSL during the 2022 PSL chairman's press conference at the PSL offices in Johannesburg on July 3 2022
Image: ©Muzi Ntombela/BackpagePix

Irvin Khoza has urged football clubs to recognise that whoever replaces him as chair of the Premier Soccer League (PSL) should be versed in the value chain from grassroots to the top flight and the challenges facing the organisation.

Khoza’s current term comes to an end in 2024 after he was re-elected unopposed in 2020. He has been chair of the PSL since its inception in 1996.

Speaking at the event where he announced the Carling Knockout Cup will replace Telkom Knockout next season, Khoza said there are capable people to take over from him.

“It is not an easy job, that’s why I tell my members that whoever is going to take over must have their heart in the right place,” he said.

“There are also some ex-players, who I always advise that it is nice to talk that you must be given a chance, but they don’t get involved in their local football asssociations (LFAs)

“Some of us who have operated from LFAs know the value chain from the LFA all the way up to where we are today. I was a cashier, a gate controller and it was not demeaning to be that.

“I did that job because it was in-service training to understand the industry better so when people speak I know exactly what they are talking about.”

Khoza said the person who takes over from him will have to balance commercial requirements with sponsors, clubs and fans.

“If it was to happen today or tomorrow, members will decide because the choice is theirs but I am saying from the benefit of hindsight that bringing in someone who understands the value proposition and challenges we are facing is essential.

‘A gentleman of the game’: Khoza pays tribute to Chiefs, Pirates great Sadike

Orlando Pirates boss Irvin Khoza has paid glowing tribute to the club's former star Jerry Sadike, who passed away at the age of 70 last week.
Sport
1 month ago

“That person will have to balance the commercial requirements of the sponsors with the interests of supporters and expectations of the media and creates conversations among fans to remain relevant and ensure the interests of the clubs.

“And the interests of unsung heroes who dip deep into their pockets to finance their clubs [the supporters]. They are never spoken about and are forgotten. These are the guys who said I am going to raise my hand and spend my family’s money.”

Khoza said when he was appointed PSL chair nobody gave him a chance.

“The moment finds the man. When I became chairman nobody thought I would be chair. They said I am conflicted, he is a club man, doesn’t he have experience and whatever.

“Time was a determiner and we cannot forfeit a solution because this is a members' organisation. For them to have taken a decision at that time to change the constitution for me to be given a chance to serve their interests, it dawned in my mind that they are saying I must be chairman because they want someone with a skin in the game.

“There were people who were employed somewhere, independent people, but they had no understanding of the environment and the ecosystem.

“We are being given that kind of menu to say we must have independent people but they also have agendas. They come in, take the league and make it their fiefdom.

“Imagine, we have invested our lives in the business where we are spending from our pockets and not from grants. The guy decides this because of his plans, not the plans of the members who want somebody to assist them to advance the cause of their business.”

Orlando Pirates boss Irvin Khoza says he will never be at peace until the killer or killers of his club’s former captain and goalkeeper Senzo Meyiwa ...
Sport
1 month ago

Premier Soccer League (PSL) chair Irvin Khoza is hoping the future of the league's CEO will have been decided by the time the league holds its AGM in ...
Sport
1 month ago

OPINION | SA football is doomed, and the dinosaurs trampling it don’t seem to care