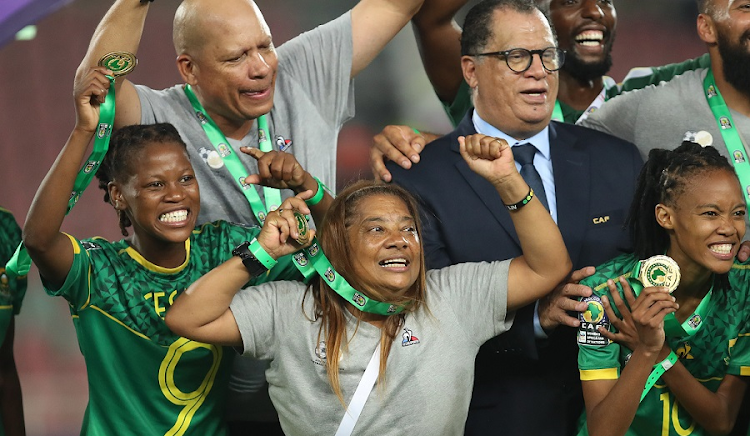 The 23 Banyana Banyana players who were in Morocco were promised a win bonus of R400,000 each, or R9.2m in total, from Safa before the Wafcon, where they clinched the title with their 2-1 final victory against the hosts in Rabat on Saturday.

Jordaan said the technical team will only start negotiating their win bonuses now they have returned to SA.

“Over the next few days we will have to sit down because remember, there's not just the players, there is the technical staff,” he said.

“And I had a meeting with them [the coaching staff] in Rabat on the very question to say, 'We can't forget you. We can't have only players on the field [getting win bonuses].'"

“So unfortunately those are issues we have to sit down and discuss with them. We only won on Saturday and only arrived back today [Tuesday], so obviously we did not discuss that [yet].”

Banyana's Wafcon victory has raised the question of equal pay for the women's national team, who have far outperformed Bafana Bafana on the international stage in the past decade.

Jordaan said the main reason for the huge pay discrepancy between men and women footballers in the country is the gap in broadcast revenue.

“If you get broadcast revenue for women's football the question of pay parity is over. Because you find that the men are paid R2.8bn [in broadcast and sponsorship] and for broadcast R1.4bn, but for Banyana, nothing, not a cent,” he said.

The Safa president was referring to broadcast revenue generated by the men's Premier Soccer League (PSL) compared with that brought in by the women's Hollywoodbets Super League.

Show them the money: why Banyana deserve better, not equal, pay than Bafana

To address the imbalances of the past, Safa should go beyond equal pay
Sport
3 weeks ago

Minister of sports, arts and culture Nathi Mthethwa has promised equal pay for all women’s sports teams in SA, including Banyana Banyana.
News
3 weeks ago

WATCH | Banyana and Bafana to be paid the same in future, says Danny Jordaan

Women’s Africa Cup of Nations champions Banyana Banyana touched down at OR Tambo International Airport to a heroes’ welcome on Tuesday morning.
Video & Podcasts
3 weeks ago

Banyana made history when they won SA's first-ever Wafcon on Saturday night.
Sport
3 weeks ago