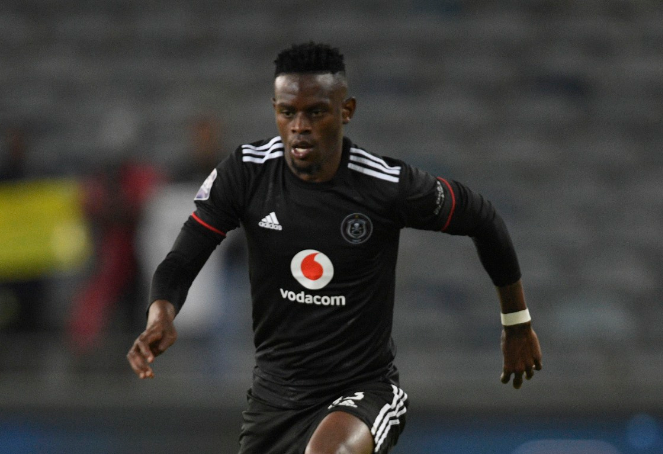 Orlando Pirates' new captain Innocent Maela has revealed he takes inspiration from his older brother and former Bafana Bafana star Tsepo Masilela, who he credits for always providing him with guidance in his career.

The two left-backs share their father Eric Masilela, but have different mothers. Tsepo, 37, was released by AmaZulu at the end of last season and is yet to indicate whether he'll continue playing in the coming season.

Masilela is regarded as one of SA's best left-backs of the modern era and turned out for clubs including Getafe in La Liga and Kaizer Chiefs.

Maela has followed in his brother's footsteps, becoming a fully-fledged Bafana international. He was recently named Pirates' captain ahead of the 2022-23 season.

“Tsepo played his last match at the age of 37 and he said to me, ‘If you want to play for that long make sure you remain focused and disciplined'," Maela said.

"I asked him why and he said, 'That’s where everything starts. If you want to play football for long make sure t you’re in a healthy space mentally all the time'.

"It’s a huge achievement for him to play football until that age. For me, I don’t know because we’re not the same but I take a lot of inspiration from Tsepo’s career playing in Spain with likes of [Lionel] Messi and [Cristiano] Ronaldo.

"For me he’s arguably one of the best left-backs produced in the country and I’m not saying this because he’s my brother. He inspires me a lot and I call him all the time when I need advice.

"He calls me all the time after a match and ask me questions about the game. He’s there to help me and I'm grateful for him.”

At the beginning of last season Maela, 29, had doubts about his career lasting as long as Masilela's when he had a groin injury that kept him out of the 2021-22 campaign for five months. He was injured in a preseason game against Kaizer Chiefs.

Pirates struggled without Maela, especially in the DStv Premiership where they ended in sixth place and outside of competing in one of the two Caf competitions in the coming campaign.

Missing Caf competition is something t Maela thinks may help Bucs win something domestically in 2022-23 as their schedule will be lighter, but not in terms of the growth of their players.

“I think it goes both ways," he said.

"As players we obviously want to play and compete at the highest level and play the biggest competitions. But it’s also no secret that playing continental football takes a lot from the players.

"Does it give us an extra advantage competing only for the domestic titles? Yes. But it's also is a huge disadvantage not playing continental football.

Orlando Pirates left-back Innocent Maela is pleased that some of the club’s supporters see him as the next Bucs skipper after the departures of Happy ...
Sport
2 weeks ago

Mamelodi Sundowns have launched their jersey for the 2022-2023 season, and if Orlando Pirates fans baulked at the cost of their new shirt at R1,099, ...
Sport
2 weeks ago

Kaizer Chiefs owner Dr Kaizer Motaung said “never in his wildest dreams” growing up in Soweto and in his formative years as a footballer could he ...
Sport
2 weeks ago

Deon Hotto vows to give Bucs fans some silver

That it has been a decade since Orlando Pirates last won the SA league title doesn't stop Bucs star Deon Hotto vowing the Buccaneers will end the ...
Sport
3 weeks ago