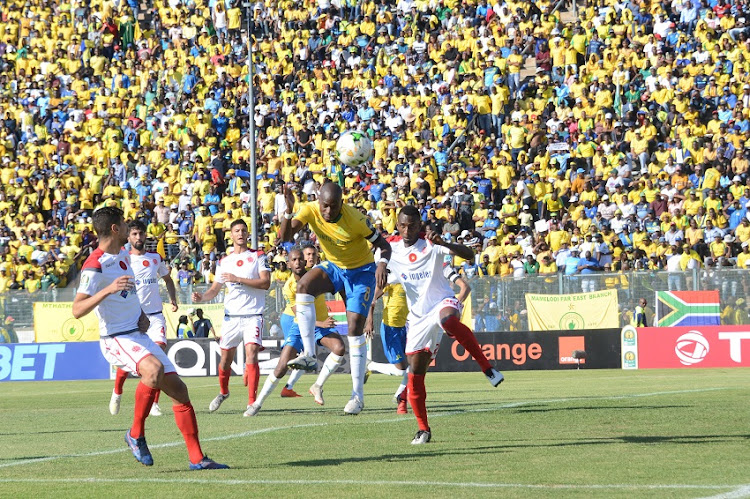 Hlompho Kekana of Mamelodi Sundowns head the ball while challenge by Wydad players during the CAF Champions League match between Mamelodi Sundowns and Wydad at Lucas Moripe Stadium on May 04, 2019 in Pretoria, South Africa.
Image: Lefty Shivambu/Gallo Images

The Confederation of African Football (Caf) have opened the door for a switch back to a January-February Africa Cup of Nations finals in 2021 after delaying the announcement of the dates for the competition in Cameroon.

Caf have been thrown a difficult bone by Fifa after the latter announced that their inaugural‚ expanded Club World Cup in 2021 would be played from June 17 to July 4.

That leaves a narrow window of the last three weeks in July – before the start of most northern hemisphere domestic seasons – for Caf to host their flagship continental competition‚ though but that would also still cut into the preseasons of most European clubs.

European clubs have always been dismissive of the Nations Cup and none would want to lose their stars for what is a crucial time of the year for them in the build up to the new campaign.

It also means those players involved in both the Club World Cup and Nations Cup will have no time off between campaigns.

Caf had moved their Nations Cup finals to mid-year to avoid these issues‚ but are now stuck with them again‚ though the Club World Cup is only played every four years.

It is likely to be the reason why Caf held off on naming the dates for the tournament as expected‚ saying only in a statement: “Due to meteorological issues‚ the dates of the CAN 2021 will be decided jointly by Caf and the Host Country”.

Cameroon is notoriously wet during the middle of the year and in some major centres‚ such as Douala‚ on average it rains heavily in 27 out of the 31 days in July.

This has the potential to lower the standard of the competition and cause havoc for organisers‚ and could be used as the excuse to avoid a clash with the Club World Cup by moving the event back to its January-February slot.

That will‚ of course‚ put it on a collision course with leagues around Africa and Europe‚ but may be seen as the lesser of two evils.

As expected‚ a Caf executive meeting this week also ratified the cancellation of the television deal with Lagardère Sports‚ and also added three new prizes to their annual awards ceremony‚ including best African Club President.

That will pique the interest of Mamelodi Sundowns boss Patrice Motsepe‚ though just what the criteria are for the award is not clear and it is likely to be used as a political tool to gain patronage.

The other awards are for best African Interclubs Player of the Year‚ to be selected from the Champions League and Confederation Cup competitions‚ and a special recognition award for contributions to society.

Caf also approved the dates of the next African Nations Championship‚ to be staged in Cameroon‚ which will be April 4 to 25‚ 2020‚ and stated that the Caf Super Cup between Esperance and Zamalek will be played in Qatar on February 14.

Outspoken Zamalek president Mortada Mansour has already stated that his side will not play in Qatar‚ who he sees as an enemy of Egypt‚ so that is another issue that will come to a head.

Caf also approved the expansion to 12 teams of the African Women’s Championship and junior events in the Under-17 to U-23 age groups‚ which will give South African sides a much greater chance of qualification.