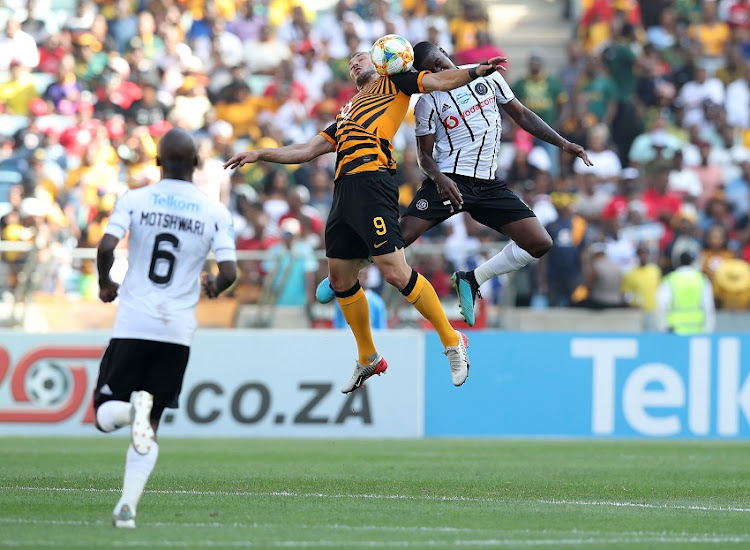 Orlando Pirates went to the half-time break leading Kaizer Chiefs 1-0 in their exciting and controversial Telkom Knockout quarter-final clash in Durban on Saturday.

The only goal of the Soweto derby so far came after 34 minutes from the boot of Fortune Makaringe when he tapped home after he received a perfectly-laid pass from Thembinkosi Lorch.

The match had its share of controversy in the 21st minute when Chiefs striker Samir Nurkovic thought he equalised with a close-range header from Khama Billiat’s cross but near-side assistant Zakhele Siwela erroneously ruled him offside.

The opening five minutes of the match belonged to Chiefs as they managed to overpower the Pirates midfield and launched attacks through George Maluleka, Leonardo Castro and a header from a corner kick by Eric Mathoho.

Pirates recovered with Lorch getting the better of Yagan Sasman at right wing before delivering a good cross that was not close enough for well-placed Tshegofatso Mabasa.

Minutes later, Makaringe’s cross found Mabasa inside the box but he had company in the form of Mathoho, who denied him the opportunity to direct his header to the target.

As the game progressed, Pirates goalkeeper Wayne Sandilands had to produce a stunning diving save to deny a header from Castro, who connected perfectly with a well-taken free-kick from Lebogang Manyama.

Just before the half hour mark, Pirates were unlucky not to have their name on the scoresheet as Pule’s close-range effort bounced off the upright following a team attacking move.

Tensions spoiled over after the hour mark with players at each other’s throats but referee Jelly Chavani managed to deal with the situation that resulted in a yellow card for Lorch.

The opening goal came when Makaringe tapped the ball past Akpeyi after Lorch perfectly laid the ball on his path following failure by Chiefs’ defence to clear the danger.

On the stroke of half time, Chavani left Chiefs off the hook by waving play on when it appeared that Akpeyi brought down Mabasa in the box.