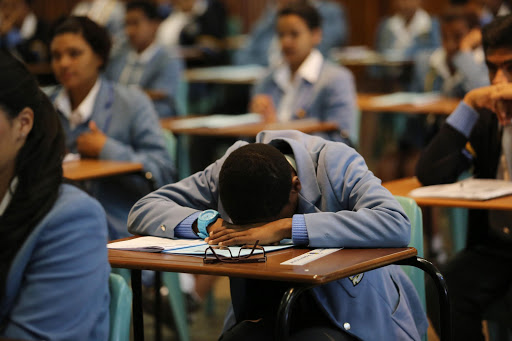 PASSED OUT With matric exam results to be released on Monday, unions have advised South Africans to brace for a decline in the pass rate from last year.
Image: Shelley Christians

When the matric results come out on Monday, don’t rush to jump down the Class of 2020’s throats if they are lower than expected.

This is the view of teacher unions, who on Sunday said the nightmarish, Covid-ravaged year meant that a drop in matric performance was to be expected.

Basic education minister Angie Motshekga is set to release the results on Monday, not long after the Independent Examinations Board released its 2020 matric pass rate, which showed a slight drop from 98.82% in 2019 to 98.07%.

General secretary for the SA Democratic Teachers’ Union (Sadtu), Mugwena Maluleke, said a drop in matric results was to be expected — but he asked the nation to appreciate the challenges that teachers and pupils faced in 2020.

“There was a lot of fear, anxiety and lack of knowledge on the pandemic. Teachers and learners had to grapple with a lot of things, apart from the lost academic time,” he said.

Maluleke urged South Africans to appreciate the sacrifices that teachers made — sacrifices without which pupils may never even have been able to sit for the year-end examinations.

“Teachers had to work on weekends, start their days early and finish late to offer extra classes to the learners to make up for the time lost,” Maluleke said.

On top of it all, he said teachers also had to convince parents who were keeping their children at home to send them to school.

“Teachers pleaded with parents who were refusing to send their children to study camps and classes in general. They were dealing with a lot,” he said on Sunday.

Another factor likely to lead to poorer results was the inequality in the country.

Maluleke said rural schools experienced a delay in the reopening of schools after the initial hard lockdown, due to a lack of personal protective equipment and proper ablution facilities, so the teachers and pupils in those areas suffered. On top of this, many pupils simply didn’t have access to technology that allowed for remote learning.

“Poor communities make up a big percentage of learners in the country. That is why I say I expect a drop [in results],” he said.

“In fact if it wasn’t, I’m sure everybody would have more questions than they would have answers. We can’t pretend that Covid didn’t happen,” he said.

Manuel added: “I know that people pulled out all out the stops, and I don’t want to take anything away from our teachers who really battled and tried. Many of our matric teachers didn’t have a weekend or a holiday since the children went back. That’s the reality.

So we must expect a drop. I don’t think we will have more than a 5% drop nationally.

“Some children still did not manage to complete all the work, because the pace was too hectic.

“So we must expect a drop. I don’t think we will have more than a 5% drop nationally. Five percent would be reasonable, given what has happened.”

Manuel believes the bigger issue at play was the quality of passes.

“I think there we may see a decline. As much as we may see many children pass, but the quality will definitely be affected. The quality of course determines access to tertiary institutions.

“Hopefully the universities will have other strategies in place. I’m not saying they must lower their admission requirements; what I am saying is there has to be support from the universities because there are deficits.

“It is an unprecedented time. My big fear is the pressure on the youngsters and the disappointment with failure. We must be very careful. They are stressed out. These youngsters are far more fragile than they should be for people of their age, because they have been battered by so much.”

Prof Wayne Hugo of the University of KwaZulu-Natal’s school of education said it could be “fairly safely” assumed that the Class of 2020 had not done as well as their counterparts in previous years because of the pandemic and subsequent disruptions.

“What that means is the basic education department ... has a choice to make about how far they adjust the curve, and it can only be done within legal means.

“There is going to be a drop, but they are going to make it as low as they possibly can, within the legal limits of the law to ensure our learners have access to higher education in whatever form.

“I will be very surprised if there is a headline that there has been a 10% drop,” said Hugo.

However, Prof Nuraan Davids, from Stellenbosch University’s department of education policy, said that a drop in the matric results should be expected but didn’t believe this would actually be the case.

“Logically and practically, there should be a drop,” she said.

'It's safe to say the future is now the present': Mzansi reacts to IEB matric results

The Independent Examinations Board attributed the results to good, solid teaching and learning before grade 12.
News
1 year ago

But, she said a long-standing problem with the National Senior Certificate results was that they are inflected to serve a political agenda more than an educational agenda.

“Matric results are never a true reflection of academic performance. You have to ask yourself, first, what constitutes a pass. You also take a look at how the pass criteria for results are adjusted to place a particular tone of adjustment to make education look as if it is functional,” she said.

According to Davids, this was shown in how pupils who barely passed Grade 11 suddenly obtained good marks in matric.

Basic education spokesperson Elijah Mhlanga said the department was ready. Motshekga is expected to announce the results on Monday afternoon.

“We are on schedule. We are just putting final touches. We are obviously doing things differently this year because of Covid-19 … but it looks like all nine provinces are ready.”

Mhlanga said matriculants could access their results from the department’s website initially, but on Tuesday they would have to physically visit schools to collect them.

Mhlanga advised that pupils not to rush to schools on Tuesday morning, but stagger their visits to schools to avoid overcrowding.

“Health and safety measures, as so far as the Covid-19 is concerned, have been taken care of. Schools are ready for that, and will ensure that everyone is sanitised and that there is social distancing. Schools are ready to assist, but please don’t go too early. Rather go a little later,” he said.