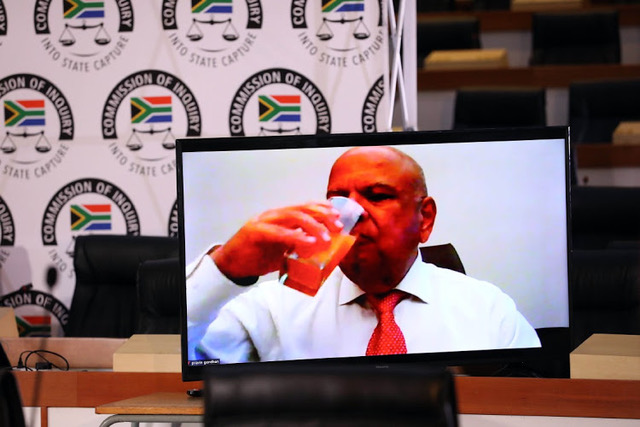 The Zondo commission on Wednesday heard details of how former Sars commissioner Tom Moyane, tried his best to conceal pro-Pravin Gordhan evidence back in 2016.

At the time, the Hawks and the NPA were pursuing Gordhan for, among other things, allegedly illegally approving the early retirement of ex-Sars boss Ivan Pillay and then rehiring him as a consultant.

Senior manager at Sars Vlok Symington told the state capture inquiry how Moyane “withheld critical information” that could have proved to the Hawks and NPA that there was no case against Gordhan.

Former NPA boss Shawn Abrahams on October 30 2016 dropped the case against Gordhan, just days after what appeared at the time to have been a manoeuvre by Moyane to make the charges stick.

Symington recounted to deputy chief justice Raymond Zondo how Moyane allegedly worked behind the scenes in that time.

It all started on October 18, when then deputy Sars boss Kosie Louw passed a letter to Symington, delivered to him by Moyane’s office. It was a request by the NPA for Symington to submit an affidavit on his version of the retirement of Pillay.

That same day, four Hawks officers arrived at Symington’s office to ask him about a memorandum he had written in 2009 on the Pillay retirement issue, in which he said it was all above board.

Symington asked the Hawks officers why they were asking him about the memo if they had a copy of it. One of the officers said they had only recently discovered it, while the other admitted that they had had it for a long time.

“The Hawks then asked to visit the offices of Mr Louw. I asked my secretary to accompany them. She went off with them,” said Symington.

The officers “disappeared” on the way to Louw’s office, and Symington’s PA and Louw embarked on a search looking for them, “only to find them in the Mr Moyane’s boardroom”.

The officers returned to Symington’s office and met with him again at lunch time in his boardroom. This time, there was another man with them who it later emerged was Moyane’s bodyguard.

“The meeting was all of a sudden hostile,” said Syminton. “Brigadier Xaba asked me to hand over the NPA letter to him and in return he would hand over his copy of the same letter.

“It later turned out that in my copy, the bottom had the e-mail trail from where it originated and all the other people that were involved in it. But on their copy, that e-mail trail was not attached, so obviously they were trying to get the e-mail out of my hands.

“There was an e-mail that, very clearly, the Hawks and Mr Moyane had an interest to retrieve.”

Now getting suspicious, Symington attempted to leave the boardroom but Moyane’s protector blocked him.

There was an e-mail that very clearly the Hawks and Mr Moyane had an interest to retrieve.

Louw was called in and he came with two colleagues, asking the Hawks officers to step out of the boardroom so he could have a word with Symington.

Moyane’s bodyguard stayed inside, while the Hawks officers waited outside the boardroom.

“So I attempted to exit the room, as I did, the Hawks physically grabbed me and took the document from my hand, and off they left,” said Symington, who video recorded the incident.

The part of the documents that the Hawks officers were interested in confiscating, said Symington, was one of Sars legal adviser David Maphakela telling Moyane that “on ethical reasons I cannot be involved in this one [the matter of Pillay’s early retirement] as I hold a different view to the one pursued by the Hawks and NPA”.

Maphakela’s opinion was that Pillay’s early retirement was legal.

Later that day, Symington wrote to Moyane who did not respond.

The following day, Symington wrote to the NPA, explaining that he had not completed the affidavit they requested because the Hawks had prevented him from doing so.

On October 20, a meeting was convened between Symington, Louw and Moyane.

“Mr Moyane expressed regret for what happened to me, and explained that he sent his bodyguard with the Hawks to make sure that nobody made a copy of the NPA letter.”

The next day, Symington wrote to Moyane and copied Louw, saying his explanation did not add up.

Mr Moyane withheld critical evidence from the Hawks and the NPA.

Moyane responded by telling Symington he was “entitled to the course of action you choose to take”.

On October 22, Symington would write his last e-mail to Moyane on the matter.

Symington summarised to the commission what he believed Moyane’s motives were for the events that unfolded during the six days in October.

“Mr Moyane withheld critical evidence from the Hawks and the NPA. I am referring to my memo from 2009 and the legal opinion from David Maphakela. The reason I am saying this, the memo of 2009 was available to Mr Moyane on Mr Pillay’s HR file which was held in his office, and Mr Moyane was also aware of Mr Maphakela’s opinion of November 2014,” said Symington.

“Not only was my memo not revealed officially to the Hawks and the NPA, but the legal opinion from Mr Mapahakela was also not made available to the Hawks or the NPA.”

Symington said “there was ample opportunity for Mr Moyane to hand over these documents”, specifically during the much publicised 27 questions the Hawks sent to Gordhan earlier that year, and when Moyane passed an opportunity to make representations that was extended to him by Abrahams.

Moyane, who was meant to appear at the commission on Thursday, has called in sick.