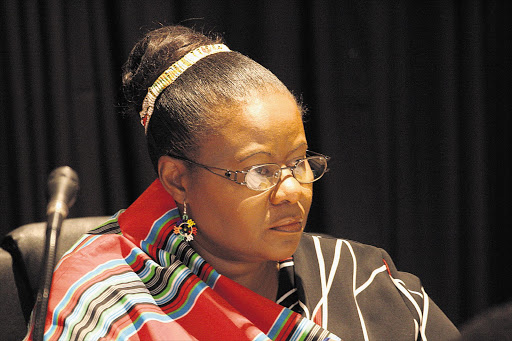 Acting chief justice Sisi Khampepe on Tuesday handed down a 15-month sentence to former president Jacob Zuma, and was openly critical of the former head of state's behaviour and attitude.
Image: Tebogo Letsie

Former president Jacob Zuma was on Tuesday sentenced to 15 months in prison for defying a Constitutional Court order to appear before the state capture commission.

In the majority judgment, acting chief justice Sisi Khampepe was openly critical of Zuma, saying he had behaved deplorably, had launched unsubstantiated attacks on the judiciary and had ultimately left the court with no option but to give him a direct prison term.

These were some of Khampepe’s most scathing comments, starting with how Zuma’s open defiance of the highest court had tested the judiciary.

“I pen this judgment in response to the precarious position in which this court finds itself on account of a series of direct assaults, as well as calculated and insidious efforts launched by former president Jacob Gedleyihlekisa Zuma, to corrode its legitimacy and authority.

“Never before has this court’s authority and legitimacy been subjected to the kinds of attacks Zuma has elected to launch against it and its members. Never before has the judicial process been so threatened,” the judgment read.

In justifying why the ConCourt had the jurisdiction to hear the case, the judgment said Zuma’s behaviour was “so outlandish” that it warranted moving away from ordinary procedures.

“It is becoming increasingly evident that the damage being caused by [Zuma’s] ongoing assaults on the integrity of the judicial process cannot be cured by an order down the line. It must be stopped now. Indeed, if we do not intervene immediately to send a clear message to the public that this conduct stands to be rebuked in the strongest of terms, there is a real and imminent risk that a mockery will be made of this court and the judicial process in the eyes of the public.

“It is perspicuous that it is in the broad public interest that this court sends an unequivocal message that its orders cannot simply be ignored with impunity. If this court does not exercise its jurisdiction to do so and grant direct access, its authority becomes phantasmic and the constitution chimeric," Khampepe’s ruling reads.

Mr Zuma’s contempt of this Court’s order is both extraordinary and unprecedented in respect of just how blatant it is.

On whether Zuma was in contempt, the finding was bluntly simple: “On the evidence placed before this court, there can be no doubt that Zuma is in contempt of court. In fact, Zuma’s contempt of is extraordinary and unprecedented in just how blatant it is.”

Khampepe’s judgment also took aim at the different public comments Zuma had made while he refused to honour the directive from the apex court.

“I must firmly allay any doubts as to the judicial value of the purported defences raised by Zuma in his public statements. Zuma’s extra-curial statements are of no relevance to the question whether he is guilty of contempt. So his endeavour in those statements to provide reasons for his defiance of this court’s order is of no moment. The fact is, he has defied this court’s order …

“Even if there were bona fide reasons for Zuma’s noncompliance, it would be wholly inappropriate for this court to search for them. Nor would it be appropriate for this court to treat Zuma’s statements as any kind of attempt to participate in these proceedings or discharge the evidentiary burden he bore, given that these submissions were not properly placed before it.

“The scurrilous and defamatory aspects of these statements, on the other hand, are bound to inform my reasoning on the appropriate sanction as they are inextricably linked to the public nature of the defiance of this court’s order,” the judgment read.

The judgment said Zuma’s statements - which it said showed the nature of the contempt - played a big role in sentencing. And, the court said, giving a sentence that tried to convince Zuma to comply to its earlier order was “futile and inappropriate in these circumstances”.

“Coercive committal, through a suspended sentence, uses the threat of imprisonment to compel compliance. Yet, it is incontrovertible that Zuma has no intention of attending the commission, having repeatedly reiterated that he would rather be committed to imprisonment than cooperate. Accordingly, a suspended sentence, being a coercive order, would yield nothing,” the judgment read.

Khampepe said the Zondo commission, “perhaps too generously at times”, gave Zuma plenty opportunities to submit to it.

At this stage, ordering and then expecting Mr Zuma’s compliance with this Court’s order is akin to flogging a dead horse.

“Indeed, it defies logic to believe a suspended sentence, which affords Zuma the option to attend, would have any effect other than to prolong his defiance and to signal dangerously that impunity is to be enjoyed by those who defy court orders. At this stage, expecting Zuma’s compliance with this court’s order is akin to flogging a dead horse.

“Zuma has demonstrated a marked disregard for the authority of this court and is resolute in his refusal to participate in the commission’s proceedings. Neither this court’s honour nor the public’s interest in Zuma’s testifying before the commission would be vindicated by a coercive order …

“Zuma has done more than enough already to deserve a punitive sanction,” the judgment reads.

Continuing in its scathing criticism, Khampepe’s judgment read: “It is unbecoming and irresponsible of a person in Zuma’s position to willfully undermine the law … Zuma had every right and opportunity to defend his rights, but he chose time and again to publicly reject and vilify the judiciary entirely … There is no sound or logical basis on which Mr Zuma can claim to have been treated unfairly or victimised by this court. His attempts to evoke public sympathy through such allegations fly in the face of reason. They are an insult to the constitutional dispensation for which so many women and men fought and lost their lives.”

Khampepe said it was vital that the ConCourt sent a strong message.

“It would be nonsensical and counterproductive of this court to grant an order with no teeth. Here, I repeat myself: court orders must be obeyed. If the impression were to be created that court orders are not binding, or can be flouted with impunity, the future of the judiciary, and the rule of law, would indeed be bleak. I am simply unable to compel Zuma’s compliance with this court’s order.

“When one considers Zuma’s public statements against this backdrop, his conduct appears all the more egregious. In sum, the position in which Zuma finds himself is of his own making ... and his attempt to equate legitimate legal processes with a witch-hunt is dangerous, unfounded and intolerable.”

The judgment continues that, being a former president, Zuma’s behaviour was even more problematic.

“Zuma is no ordinary litigant. He is the former president of the republic who remains a public figure and continues to wield significant political influence, while acting as an example to his supporters. This leads me to the final point and exceptional feature of this matter that justifies the punitive sanction that I impose: the unique and special political position that Zuma enjoys as the former president. He has a great deal of power to incite others to similarly defy court orders because his actions and any consequences, or lack thereof, are being closely observed by the public. If his conduct is met with impunity, he will do significant damage to the rule of law.

Although Mr Zuma is no longer president, his conduct flies in the face of the obligation that he bore as president. It is disturbing that he, who twice swore allegiance to the republic, its laws and the constitution, has sought to ignore, undermine and, in many ways, destroy the rule of law altogether.

“Zuma’s conduct that led to and has persisted throughout these proceedings is all the more outrageous [in regards to his former position] . Although Mr Zuma is no longer president, his conduct flies in the face of the obligation that he bore as president. It is disturbing that he, who twice swore allegiance to the republic, its laws and the constitution, has sought to ignore, undermine and, in many ways, destroy the rule of law altogether.

“The cumulative effect of these factors is that Zuma has left this court with no real choice. .”

Khampepe admitted that trying to find an appropriate sentence was extremely difficult, saying in the judgment:

“In taking stock of these exceptional circumstances, it is clear that this court must grant an order that will vindicate its honour. This court cannot be seen to condone and indulge a litigant’s flagrant defiance of an order.

“Quantifying Zuma’s egregious conduct is an impossible task. So I am compelled to ask: what will it take for the punishment imposed on Zuma to vindicate this court’s authority and the rule of law?

“With this in mind then, I order an unsuspended sentence of imprisonment of 15 months.

“I do so in the knowledge that this cannot properly capture the damage that Zuma has done to the dignity and integrity of the judicial system of a democratic and constitutional nation. He owes this sentence in respect of violating not only this court, nor even just the sanctity of the judiciary, but to the nation he once promised to lead and to the constitution he once vowed to uphold.

“So let me repeat what I have said before, for it is deserving of ingemination: Never before has the legitimacy of this court, nor the authority vested in the rule of law, been subjected to the kind of sacrilegious attacks that Zuma, no less in stature than a former president of this republic, has elected to launch. It is my earnest hope that they never again will.”