We are building up, not shutting down, says Cyril as he extends level 4, slams violence

Bar a few exceptions, the country will remain locked down for another two weeks and criminals ‘will be prosecuted’ 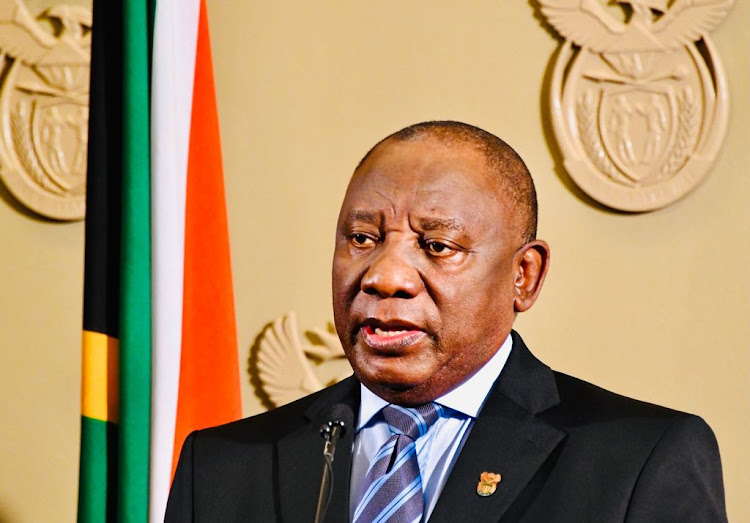 President Cyril Ramaphosa delivered probably one of his most difficult addresses to the nation on Sunday evening, announcing an extension to alert level four and lashing out at those hell-bent on destabilising SA in the midst of a raging pandemic.

His speech offered some hope: SA will as soon as this month start delivering its own vaccines — 17 million Johnson & Johnson (J&J) doses by October — and the government has found some money to extend the Covid-19 Ters payments for businesses suffering under lockdown restrictions.

But apart from him sharing the latest stats on a terrifying third wave of Covid-19 infections — daily hospital admissions next week are expected to be as high as during the peaks of the first two waves — Ramaphosa sent out a zero-tolerance message too, as initially pro-Jacob Zuma protests spread from KwaZulu-Natal to Gauteng and wreaked havoc on SA’s streets.

The country was already struggling to strike a balance between fighting the pandemic and the economic hardships that come with many of the restrictions, and Ramaphosa said vandals’ actions were making this even harder. 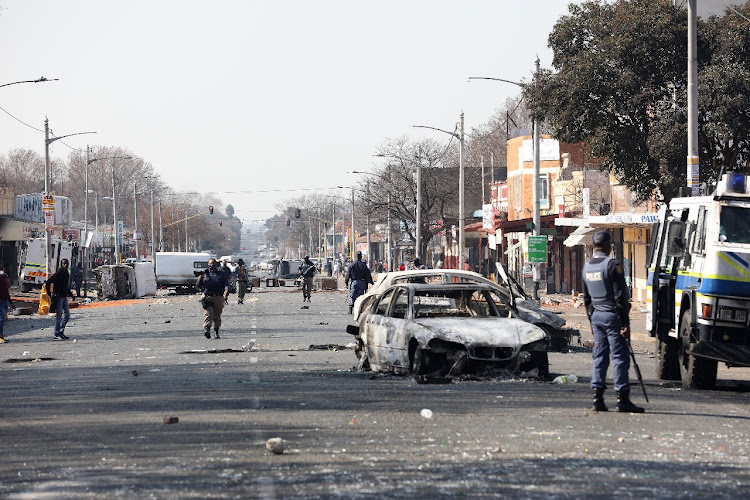 BURNING RAGE Police officers react to protests in Jules Street, Johannesburg, on Sunday as riots, first seen in KwaZulu-Natal after the imprisonment of former president Jacob Zuma, spread to Gauteng. President Cyril Ramaphosa used his address to the nation on Sunday night to slam the protestors.
Image: Veli Nhlapo

He repeatedly warned that perpetrators would be “arrested and prosecuted”.

“Let us be clear, as a nation, that we will not tolerate acts of criminality,” said Ramaphosa, adding that “the vast majority of this country’s citizens have shown that they want to live in peace and harmony”.

Ramaphosa praised the Constitutional Court’s role in safeguarding South Africans — the same court that sent his predecessor, Zuma, to prison for 15 months for contempt of court, a development that sparked violent #ShutDown protests from Friday and saw at least one person killed.

Since the advent of democracy, institutions like the Constitutional Court have been at the forefront of improving the lives of South Africans.

“Since the advent of democracy, institutions like the Constitutional Court have been at the forefront of improving the lives of South Africans.”

He made a point of saying SA was “building up, not shutting down”.

On that note, Ramaphosa announced a deal with Aspen, negotiated through the AU and EU, to improve the supply of vaccines to SA and the rest of the continent. It will see the pharmaceutical company delivering more than 17 million J&J vaccine doses in the next three months, starting in late July. That number will double monthly from October.

“As part of the effort to strengthen health security on the continent there is a commitment by Johnson & Johnson to adapt the current arrangement so that we can produce the vaccine in South Africa, under licence, rather than under contract, resulting in our country and the continent having control over the vaccines.

“We are negotiating that, in time, the drug substance itself would be produced here in South Africa, so that we have a fully owned African vaccine manufactured on African soil in a number of countries on our continent.”

In the meantime, while SA is still battling a third wave of infections that has swept through Gauteng and is spreading to other provinces, alert level four restrictions need to stay in place for another 14 days, he said.

This meant a ban on alcohol sales, a 9pm to 4am curfew, schools remaining closed until July 26 and gatherings being prohibited. The only big difference is that restaurants and eateries can operate while observing strict health protocols, gyms and fitness centres can open and animals auctions will be allowed.

To mitigate the dire financial effects of these restrictions remaining in place, the government has decided to extend support to those industries.

“Following the move to alert level 4, the Unemployment Insurance Fund (UIF) embarked on negotiations with social partners to address the difficulties that employees who lost income under these restrictions.

“The details of the extension will be published shortly, following the finalisation of the full scheme, which will include further details on who is eligible for this support,” he said.

Ramaphosa said the government was well aware of the hardship brought on by restrictions, but for the moment, it had no choice.

“Despite the economic impact of these restrictions, we need to appreciate that it is the pandemic itself that poses the greatest threat to economic recovery,” said Ramaphosa.

There were 16,302 new Covid-19 cases recorded in the past 24 hours, according to data released by the National Institute for Communicable Diseases (NICD) on Sunday.

The NICD said there were also 151 Covid-19 related deaths in the past 24 hours, meaning 64,289 people have died from the coronavirus in SA to date.

Of the new cases, the institute said 8,543 were recorded in Gauteng, followed by 1,945 cases in the Western Cape.

In some good news, the NICD reported that the seven-day moving average of new cases had declined.

The NICD added that there were also 459 hospital admissions in the past 24 hours, meaning there are now 16,341 people being treated in the country's public or private facilities.