Making sense of it all: Alex looters tell peace forum why they did it

The consensus was that the looting had not been about Zuma, but rather unemployment, hunger and poverty 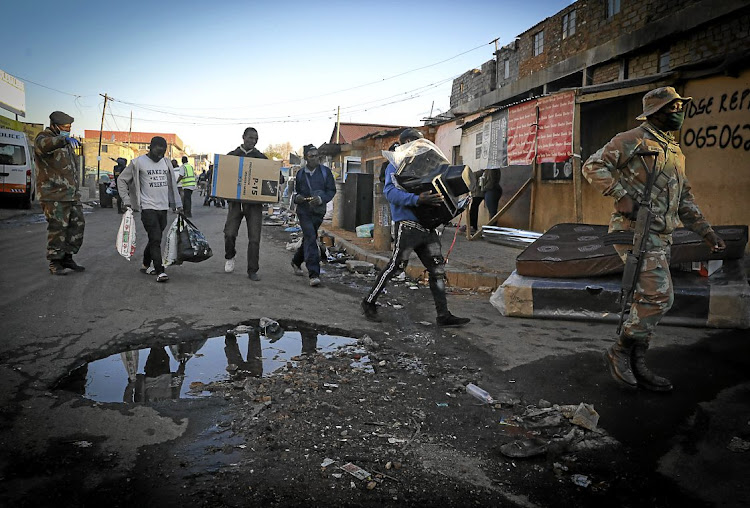 AFTER THE FACT Soldiers, police officers and community policing forum members go from door to door in Alexandra township, Johannesburg, to retrieve goods stolen by people during a week of looting and vandalism in Gauteng.
Image: Sebabatso Mosamo

“Can you imagine a better feeling than going to sleep knowing that when you wake up, you are going to have something to eat?”

This was the explanation given by one of the looters who was part of the five days of ongoing attacks that took place in Johannesburg’s Alexandra township last week.

It has taken just a few days for Khulisa Social Solutions to set up peace dialogues for the Alexandra community to address the looting crisis that hit the township as violence ripped through the country — allegedly in response to former president Jacob Zuma’s incarceration.

Khulisa, which has been active in Alexandra for the past 20 years, was approached to help the battered community understand and come to grips with what happened. They partnered with the police to host peacemaking dialogue circles, which began on Wednesday and will continue for two weeks.

I am not a criminal. But when I saw people looting the shops, I realised that they will be empty by morning and there will be nothing left. So I just felt: ‘Hey, this is my chance to have food.’ Starvation was my life, and I just wanted food.

Khulisa CEO Lesley Ann van Selm said the idea was to bring together the looters, parents, victims and others impacted by the violence to tell their stories, come to an understanding of what happened and begin a process of healing.

Khulisa social worker Nomusa Hlongwa, who is based at the Alexandra magistrate’s court where she is involved in diversion work with young people in conflict with the law, is the process facilitator. She has set up a number of dialogue sessions in the Alexandra police station board room.

“At first the looters were reluctant, but as soon as I told them that I was not trying to get them into trouble, that I just wanted to get to know them better and try to understand what they were thinking and hear their stories, they agreed,” Hlongwa said.

And so numerous sessions have been set down over a two-week period, during which people can share their experiences and explain their ideas of solutions, to try to create a better understanding and avoid similar conflict in the future.

As the sessions began unfolding on Thursday, the looters expressed their anger and disappointment — mostly with government — saying their actions had been fuelled by numerous frustrations, ongoing hunger and poverty and feelings of utter hopelessness.

“I am not a criminal. But when I saw people looting the shops, I realised that they will be empty by morning and there will be nothing left. So I just felt: ‘Hey, this is my chance to have food.’ Starvation was my life, and I just wanted food,” said one of the participants who asked not to be named.

Student intern Sbongile Mdhletshe, who attended the first two gritty sessions on Wednesday, observed that everybody, looters included, was “angry, sad, disappointed and worried” about what had happened. Very few were happy, though one did candidly state: “I can say I was happy because I got things I needed for free.”

Some of the participants said they were changed by the experience, as they previously had no opinions on how the country should be run, but now they do. They felt that government should be held responsible for the looting, while other said it was a collective issue involving everyone.

“Others had concerns about the way the community handled themselves — such as sending out small children to loot, burning buildings and throwing stones at the police. They showed regret about those who died and those who lost their jobs,” the student reported.

Correctional services minister Ronald Lamola says no-one who took part in acts of criminality will evade justice and some could face terrorism or ...
News
10 months ago

She said participants explained their experiences and involvement in stealing, burning tyres, firing guns, being shot at with live ammunition, vandalising property, destroying things like ATMs, people dying, people being arrested and having their goods confiscated by the army and police.

Participants said they had been mobilised from their homes by instructions to come and get food. Very few mentioned Zuma, though one participant said when she was told it was about him, she started picking up only items that had been dropped by other looters.

The student said participants agreed that the looting had not been about Zuma, but rather the unhappiness of the community over issues such as local jobs being taken by residents from other townships, competing for unskilled jobs, and the fact that having untraceable addresses made them unemployable.

They expressed fear for the future, having nowhere to buy food, rising food costs and now having to leave the area to withdraw money because ATMs had been destroyed. Some families were facing extreme poverty because breadwinners had lost their jobs.

Do you think citizens did more than security forces to protect SA during the unrest?
Get the Sunday Times Daily app or daily email newsletter