There has been a noticeable spike in incidents in Limpopo, Mpumalanga and Free State 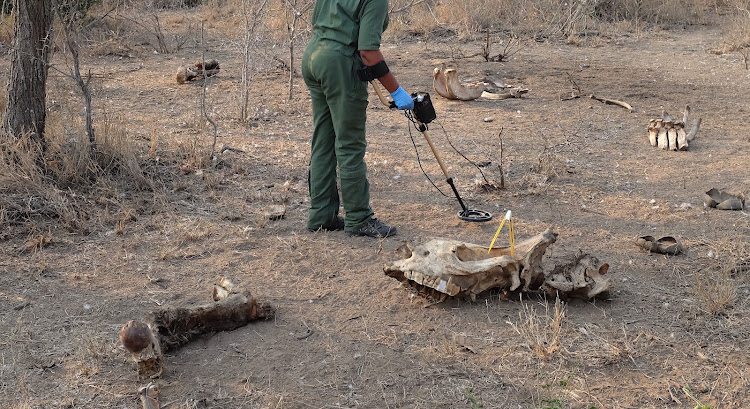 A SANParks investigator uses a metal detector to search for the poacher's bullet at a rhino poachinbg scene in Kruger National Park.
Image: Paul Ash

Rhino in SA’s parks are under pressure once more as poaching incidents rise in the wake of easing Covid-19 movement restrictions.

Some 249 rhinos were killed for their horn between in the six months from January to the end of June, the forestries, fisheries and environment department said.

While the figure was higher than the 166 animals poached during the same period last year, it was still an improvement on 2019 when 318 animals were killed during the first half of the year, said department spokesperson Albi Modise.

There had been a noticeable increase in poaching activity in Limpopo, Mpumalanga and the Free State, he added.

Rhinos in KZN continued to bear the brunt of the killings, however, with 33 animals lost this year, 47 last year and 66 in the first six months of 2019.

Modise said the department continued to monitor the “increased pressure” being experienced by private rhino owners and reserves.

SANParks reported that one elephant had been poached for its tusks in Kruger during the reporting period.

Arrests and prosecution rates were improving, as the combined efforts of SA’s law enforcement agencies and other authorities began to bear fruit.

Agencies now tasked with combating wildlife crime include the SA Police Services (SAPS), the Hawks, SANParks and the “Green Scorpions” along with customs officials, SANDF, provincial park authorities and the National Prosecuting Authority.

Some 125 people were arrested for rhino poaching or horn trafficking up to the end of June, 40 of them in Kruger alone.

A number of horns had also been confiscated at OR Tambo International Airport.

“The cohesive partnership with the South East Asian countries is also showing concrete results with the recent collaboration between the South African and the Vietnamese authorities resulting in one of the largest seizures of rhino horns and other wildlife products, thereby disrupting syndicate activities,” said Modise.

Meanwhile, 14 poaching cases had been heard in court with a 93% conviction rate, amounting to 20 people found guilty.

However, the pandemic continued to put the brakes on finalising cases as staff were forced to quarantine.

Rhino and elephant poaching has declined significantly this year in Namibia, home to the only free-roaming black rhinos left in the world, government ...
News
9 months ago

Beauty from cruelty: art made from Zim snares helps save wild dogs

Distracted by the pandemic, we forget the ever-present contagion of brutal crime

As Covid-19 continues to scythe through the country with a ferocious intensity, an epidemic that is often forgotten or taken for granted is doing ...
Opinion & Analysis
10 months ago