Former cop Nomia Ndlovu has pleaded not guilty to 20 charges, ranging from murder and attempted murder to fraud 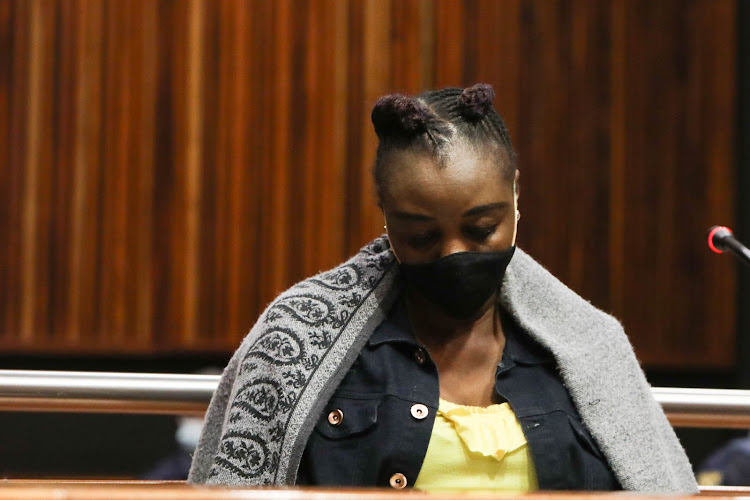 So petrified was Gladys Ndlovu of her cousin, murder-accused former cop Nomia Rosemary Ndlovu, that she packed up her life and moved away. She wanted nothing to do with anything that would tie her to Ndlovu.

This is according to investigating officer in the case, Sgt Keshi Benneth Mabunda, who last week took to the stand in the high court, sitting in Palm Ridge, to inform the court that Gladys, who had been listed as a state witness, had fled her Thembisa home and was fearful and reluctant to come to court to testify.

On Tuesday, Ndlovu is set to take the stand for the first time, where she will present her defence. She has pleaded not guilty to 20 charges, ranging from murder, attempted murder and defeating the ends of justice to fraud.

Speaking on the sidelines of the court case on Monday, Mabunda elaborated further.

“Gladys had been emotional, even during the bail application. She became scared after she read the indictment that showed that Ndlovu had wanted to kill her. She cried throughout the consultation,” Mabunda said.

Her husband finally answered the phone and said they were fine, but he was not willing to disclose where they were. He said she wouldn’t come to court.

After not finding Ndlovu at her home in Thembisa, Mabunda was worried. He went searching for Gladys.

“Her husband finally answered the phone and said they were fine, but he was not willing to disclose where they were. He said she wouldn’t come to court,” Mabunda said.

Gladys had allegedly been on Ndlovu’s hit list of relatives she allegedly wanted to kill so she could cash in life or funeral policies she had taken in their names.

Six of Ndlovu’s relatives - including her sister, nieces and nephews, her cousin and her boyfriend - were alleged to have fallen victim to her over a six-year period. Evidence provided by the insurance companies showed that she had bagged about R1.4m in policies paid out for the six.

Her cousin, Witness Madala Homu, was found dead with head injuries in March 2012. He had finished work, but never made it home.

Ndlovu’s sister, Audrey, was found poisoned and strangled to death in her rented room in Thembisa in June 2013, while her boyfriend, Yingwani Maurice Mabasa, died in October 2015 after being stabbed more than 80 times. His body was dumped near the Olifantsfontein police station.

Ndlovu’s niece, Zanele Motha, died in June 2016 after claims she had been attacked on the streets of Kempton Park. At the time Motha had travelled to her home and had been invited by Ndlovu to visit her house for a few weeks.

Ndlovu’s nephew, Mayeni Mashaba, died in April 2017, on the same day he had arranged to meet Ndlovu in Daveyton, Ekurhuleni. His body was found dumped near Olifantsfontein. He had sustained major head injuries.

The last of Ndlovu’s alleged victims was her nephew, Brilliant Mashego, who was Audrey’s son. He died in January 2018 after allegedly meeting Ndlovu in Mbombela. His body was dumped at a marketplace in Bushbuckridge.

During testimony, the court heard about the plot to kill Gladys. How Ndlovu had allegedly hired two men, Njabulo Kunene and Lakhiwe Mkhize, to commit the murder. In December 2017 they allegedly took a drive with Ndlovu to Pholoshong, where she pointed out Gladys’s house.

Ndlovu was alleged to have given the men R800 for petrol and promised them R15,000 after the job was done.

But they never carried out the plot and instead avoided Ndlovu. However, she later approached them separately, allegedly tasking the one to kill her elderly mother, Maria Mushwana, and the other to kill her sister, Joyce, and her five children. Maria and Joyce live in New Forest in Bushbuckridge, just a few homesteads from each other.

Instead of carrying out the hits, which would have seen Joyce and her five children dead - the youngest who was just five months old at the time - Kunene turned to the police and a sting operation was set up, which resulted in Ndlovu being nabbed in March 2018.

A total of 51 state witnesses have been named in the case, ranging from the alleged hitmen to the different companies Ndlovu had used to insure her victims, and cellphone experts who testified that she was in the vicinity when the crimes were committed.

But Ndlovu has indicated she only has two witnesses to call. They are her brother, Director Ndlovu, and her mother, Maria Mushwana, who has seemingly refused to testify as a state witness, even though there was mounting evidence that she was on her daughter’s hit list.

While it took weeks for the state prosecutor Riana Williams to call and solidify the state’s case, Ndlovu’s lawyer said she would only need a day to deliver her evidence.

Judge Ramarumo Monama, however, stressed that Ndlovu should not sell herself short, adding that she needed to argue evidence presented by a large group of people.

Ndlovu’s alleged killing spree ended in March 2018 when Kunene, who she had allegedly ordered to kill her sister Joyce and her five children, went to the police. A sting operation was set, which saw a recording device planted in the car of an undercover police officer who posed as Kunene’s right-hand man in carrying out the mass murder.

It was on this recording that Ndlovu was allegedly captured saying she needed her sister dead because she needed the money.

She was not expecting a payout on the lives of her sister’s children, but she had allegedly told the “hitmen” it was best to not leave any witnesses behind.