On a fateful Monday morning this week, Alicia Lamprecht’s seven-month-old baby was safely in his car seat just 1m away. Then every parent’s worst nightmare happened 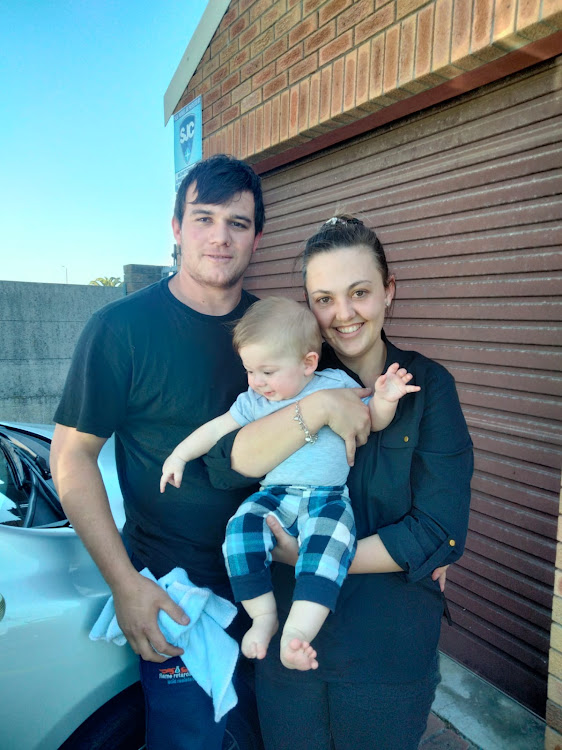 Baby Henco is reunited with his parents after his mother Alicia's car was stolen with him inside.
Image: Supplied

Seven-month-old Henco was in the back seat of the car on Monday morning while his mother, Alicia Lamprecht, made delivery runs of her home-baked health snacks and cookies for breast-feeding mothers.

It was 10.30am in Observatory, at the foot of Devil’s Peak, Table Mountain’s most northern buttress.

“I was visiting a friend and I was on my way. I was about to drive. The baby was already in the car and my friend, whose baby is the same age, was standing in the driveway with her baby in her arms,” Lamprecht said.

A few moments later, her entire world would come crashing down. For three hours, a nightmare became her reality.

Lamprecht was retrenched in 2019 and she and her husband, Coenie, moved to Brackenfell in Cape Town from Mossel Bay in March the following year. The move happened on the same day the country went into a national lockdown to stop the spread of Covid-19.

When companies started opening up again, no one was willing to hire a pregnant woman. So the 28-year-old started a baking business from her kitchen to earn money to supplement Coenie's salary as an electrical technician.

Times were tough, but Lamprecht found joy and solace in her family.

On this fateful Monday morning, Lamprecht’s baby was safe, just 1m away. Then every parent’s worst nightmare unfolded.

A mother was reunited with her months-old baby boy after a terrifying ordeal involving a hijacker, who made off with her car and baby inside on ...
News
4 months ago

As she was leaving her friend’s property, “the dog tried coming out through the gate. The gate wasn’t a metre behind my car and I literally tried shoving the dog back inside. I joked with my friend that if he comes out I’m going to take him for my husband because he really wants a pit bull.”

“In that moment we heard tyres [screeching] and when we looked up my car was gone. I started crying and screaming, ‘My baby, my baby is in the car’,” Lamprecht said, recalling the terror.

She and her friend ran into the house to grab her friend’s cellphone to call the armed response company and the police.

While hysteria gripped, Lamprecht gave her vehicle registration number to her friend.

“Then I remembered I have a tracker in my car and I opened the app on my phone,” she said.

“When armed response stopped there [at the friend's house] I said, ‘Can we please go and look for my child?’ I jumped into the car and we started chasing and following the locations on the phone,” she said.

While in hot pursuit, Lamprecht contacted Coenie, who immediately jumped into his work bakkie and rushed to help look for their son.

She relayed the live location of the car to Coenie and both parents closed in from different directions.

“Eventually, I think it was after about 40 minutes, the app said ‘ignition off’,” she said.

By this time, several neighbourhood watches had been alerted that a vehicle had been stolen in Observatory with a baby inside.

Lamprecht and the armed response officer reached the car at its location in Maitland. Coenie wasn’t there yet. She ran straight to the seat where her baby had been strapped in.

The baby was missing and so was the chair and his nappy bag.

I completely lost it and started screaming and shouting. Everyone in the street asked what’s going on. I told them, 'My child is gone'.

“I completely lost it and started screaming and shouting. Everyone in the street came to ask what’s going on. I told them my child is gone.

“They asked me what happened, what he looked like and what clothes he was wearing. I showed them photos and I gave them all my number and told them what he was wearing.

“People started walking and looking in the road and under bridges. There was a stream nearby and they went to look in the water,” said Lamprecht.

Residents, complete strangers to her, poured out of their homes to help with the search.

“One of the men came to me and said many of the buildings in the area have cameras and we should go to look at the camera footage. I looked while I waited for my husband. When my husband arrived the police and car tracker were at the premises,” she said.

But there was no sign of the perpetrators or her baby.

The police flying squad, K9 units and officers from several precincts joined the search, speeding through the streets of the suburbs looking for the criminals.

“The police were amazing. The local police who know the area well started moving into the streets with my husband. Friends and family came to the area in their cars to help and they were driving around in the streets and patrolling,” said Lamprecht.

Someone told the search parties a man was seen walking along train tracks carrying a baby chair.

“My husband and police officers started running down the rail tracks. A friend and I got into a bakkie and drove to the other end of the train tracks, near Milnerton.

“We were running up and down the railway line. We would stop and tell people, ‘If you see someone come past here with a baby chair, please let us know.’

“While we were talking to them I received a phone call from my husband to tell me they had found him. He was on his way to the scene,” said Lamprecht. 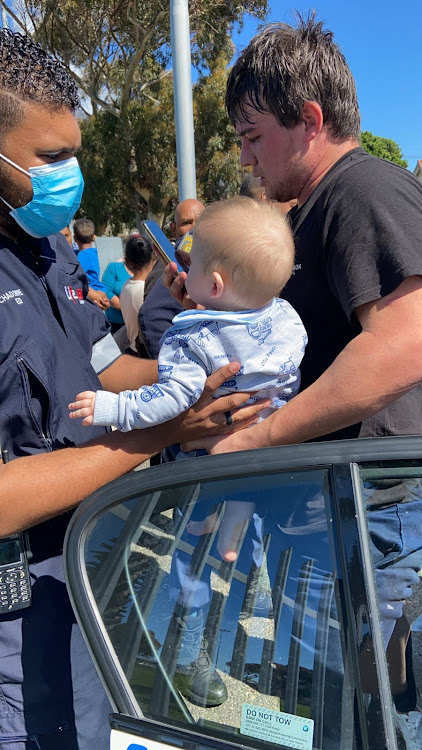 A relieved Coenie Lamprecht with his son Henco after the baby was found safe and checked by paramedics.
Image: Supplied

Coenie got into a car with police officers and they drove to the scene where Henco had been discovered.

When Coenie arrived, paramedics were doing medical checks on Henco before they would allow him to see the boy and confirm he was his son.

As details started to be pieced together, it emerged the hijackers had thrown Henco out of the moving vehicle.

Thankfully, a mother of four had witnessed the baby chair and nappy bag being tossed out. She went out and took the child into her care, before calling police and emergency services.

“I think the worst was that they threw my baby out of a moving vehicle into the street. I can’t understand how someone can do this to a baby.

“A woman in front of whose house they did it, she is a mama herself, picked him up and called the paramedics and police. That’s how we found him.

“When I got there the paramedics were done with him and papa was standing with him in his arms. I took my child and my husband hugged us together. We collapsed in the middle of the street and shouted out, ‘Thank you Jesus’ and started crying,” she said.

“When Henco saw his dad he started crying. When his dad picked him up he was calm. When I arrived he smiled at us. We were sobbing like babies,” she said.

Lamprecht met the mother who found her baby and gave her a “tight hug” and thanked her.

The couple, who have been married for three years, are still trying to process what happened.

“It doesn’t feel real to me. My husband and I said it feels like a nightmare we both had. It doesn’t feel like it really happened. We are still trying to process it.

“I’m at that friend’s house every week, so that’s the last place I expected it.

“I’m still trying to figure out how I didn’t see anyone. I will have to forgive myself eventually, but I thought, ‘How didn’t I see anyone dodgy sitting in the street? I think it was familiar to me because I’m there every week and I didn’t pay attention,” she said.

She ended her story with the adage, “time heals all wounds”.

The two men who kidnapped a four-month-old baby during a home robbery escaped through a hole in the fence at Leeuwkop prison in Bryanston, the ...
News
4 months ago

Police took a possible suspect into custody on Monday, but the person was released after CCTV footage at a shopping centre confirmed they were there at the time of the incident.

“They are taking fingerprints from the car to try to trace the person. We’ve opened a case of theft and as soon they find the suspect they will also register a case of kidnapping,” said Lamprecht.

“My stock was in my car and they tore through that, so that’s lost, but the most important thing is my child, and he’s OK.”