The vehicle burning outside a preschool in Benoni. A woman had just dropped her daughter at school when her partner allegedly attacked her.
Image: Supplied

The owner of the Benoni preschool where a woman, 27, was attacked and burnt by her partner, 40, said the woman’s daughter has not spoken since Monday’s incident.

The owner asked not to be named to protect the identity of the preschool children.

She said the woman had burns on her back, chest, face, hands and feet. The victim’s father said she was in a “very bad” condition, she said.

According to a statement by ER24, the medics on the scene, three patients were treated and provided with advanced life support interventions before they were transported to nearby hospitals for further care.

The owner said the incident had left the facility’s staff and children stressed and traumatised.

“I’m worried about the children's and teachers’ trauma.

“Incidences of gender-based violence (GBV) are out of hand. We are all shaken up. I could see one teacher was not OK. I spoke to her and discovered her friend had gone missing and was found murdered by her partner. The same teacher also witnessed another horrific incident of GBV.

“When I went home I told our domestic worker what had happened and discovered she was also experiencing problems.

“GBV affects everyone. There will be counselling for all the children and teachers. We have also ensured the young daughter [who witnessed the attack on her mother] has counselling. I hope the little girl doesn’t have [emotional] scars. Her grandfather said she’s not talking.”

When TimesLIVE visited the school on Tuesday, the parking spot where the car stood showed clear evidence of the fire. The pavement was black and there were traces of melted metal. A net on a jungle gym metres away also showed signs of heat damage as did leaves on a tree nearby. Upon closer inspection, there was evidence a cellphone had melted into the tar on the passenger’s side. The first thing the reporter noticed was the smell of the fire accelerant. The victim lives near the local police station and police intimated they had been called to her home more than once on Sunday evening because of a domestic dispute.

The preschool owner said she was familiar with the suspect because he often dropped off the little girl and picked her up. She said he was a taxi driver and his vehicle was always immaculate.

On Tuesday, after speaking to teachers and neighbours near the school, and after viewing footage on the school’s cameras, the owner spoke about the incident.

On Monday at 6.20am the mother dropped her daughter at the school. Her car was parked in front of the entrance to the school and her cousin was in the passenger seat.

When the woman exited the school her partner pulled up in his taxi. He ran towards the car as she closed the door and smashed her window with a hammer. He then ran back to his taxi to fetch a can of petrol. 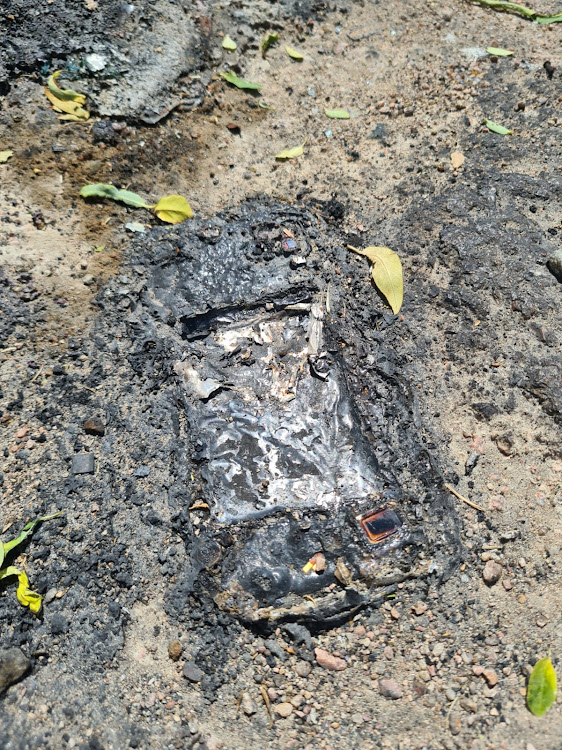 The blaze was so hot it melted this cellphone into the pavement.
Image: Alex Patrick

The woman had opened her door but did not notice her partner running back with the petrol can. As he pushed the can into the driver’s door she pushed back and the petrol splashed on both of them. He then set fire to the inside of the car.

The owner described the ensuing fireball as an “explosion”.

“I live houses away from the school and was getting ready for the day when I received the call. ‘It’s burning! It’s burning!’  was all I heard. I was convinced my school was on fire and I could see the dark clouds as I raced there.

“Thank God there were only six children there at the time [more than 100 children attend the school]. There was a child in the car next to the fire who witnessed everything.”

The injured woman ran across the road to an empty field. A nearby runner saw her and instructed her to “drop and roll”.

As the two women worked to put out the flames, the suspect got back into his taxi. He jumped the pavement and tried to run over the women, but they fled. He tried again.

By this time a neighbour had heard the commotion and came to help.

“He was very brave. He pulled the man out of the taxi and stopped him.” 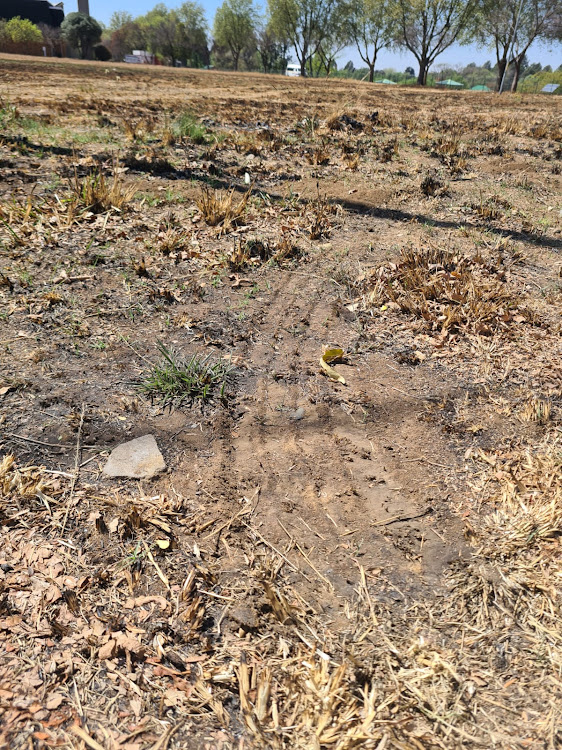 The field opposite the school still shows tread marks in the grass and soil where the man went after his injured partner in his taxi.
Image: Alex Patrick

The woman ran back into the preschool and the suspect jumped into the burning car.

“I think he was trying to commit suicide. But he jumped out again. That fire was so hot he came out smoking. Then he went back into the taxi and drank battery acid.”

The owner said she was grateful to parents for being supportive of the victim and the school.

“The first thing I did was send a voice note telling the parents what had happened and that school would be closed for the day.

“The children who were there witnessed the woman’s pain. We have been speaking about it and we are getting counselling.

“What I’ve learnt is that GBV is rife. Before this I didn’t know how many lives it touched. That night none of us got much sleep.”

Gauteng police confirmed they were investigating an attempted murder case. The suspect is in hospital under police guard.

An additional charge of malicious damage to property will be investigated.

The motive for the attack is under investigation.

A drink at a tavern turned deadly when a 23-year-old man allegedly killed his 21-year-old girlfriend on Saturday at Gopane village, outside Zeerust ...
News
8 months ago

A clash between traditional and modern values is at the heart of much of the violence, say experts
News
8 months ago

Dlodlo asked how it is that SA, a country that has made great strides in the empowerment of women, is among the countries globally where women are ...
News
8 months ago

A woman is fighting for her life in hospital after being set alight, allegedly during a domestic dispute, in Benoni, Ekurhuleni, on Monday.
News
8 months ago