I insured them so they wouldn’t be a burden on me, says ‘killer cop’ Ndlovu 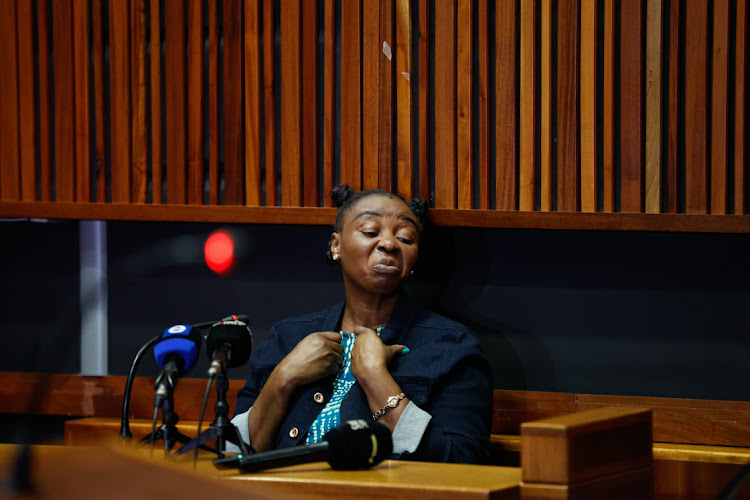 DEFIANT Nomia Rosemary Ndlovu has explained why she took out insurance policies on her relatives.
Image: Thulani Mbele

The former police officer accused of murdering five of her relatives and her live-in boyfriend pleaded her innocence before the high court sitting in Palm Ridge on Thursday.

“I am innocent. I never killed anyone,” Nomia Rosemary Ndlovu said, as she testified in Xitsonga.

She is accused of killing at least six of her relatives since 2012 to cash in on insurance policies she opened in their names. She was arrested in March 2018 after she allegedly took “hitmen” and an undercover police officer from Johannesburg to Bushbuckridge to point out her sister’s house. She was caught on camera ordering the men to burn the family of six alive.

But Ndlovu on Thursday disputed the state’s case, saying she had a plausible explanation for the dozens of policies she opened over the years.

She said first, some of the people she insured were relatives who were unemployed.

“I was avoiding a situation that they would be a burden on me if they passed away while unemployed.”

She said she started insuring family members after a previous unpleasant experience, in which she incurred the costs to bury a relative who was unemployed and had no insurance.

It is the state’s case that Ndlovu cashed in more than R1.4m in insurance over a six-year period. In some instances it was alleged she claimed funeral policies, but never contributed a cent towards the funerals.

The court has heard evidence that suggests Ndlovu at one time called an insurance company pretending to be her sister Audrey, took out life insurance cover in Audrey’s name and listed herself as a beneficiary. Audrey died in June 2013. The state believes she was poisoned and strangled to death.

Ndlovu replied to these allegations on Thursday.

“Mine and my sister’s voice sound very similar,” she Ndlovu, adding it would be difficult to tell them apart.

“But I never impersonated her,” she added.

As photographers surrounded her, she flung food, which she had earlier requested from a journalist, at photographers, hurling insults at them.

Evidence presented to the court indicated it was Ndlovu’s phone that was used to make the calls to the insurance company.

She told the court she had given Audrey one of her cellphones and an extra Cell C sim card.

Ndlovu was due to be cross-examined by prosecutor Riana Williams on Thursday afternoon. However, she said she was not feeling well. After asking for some water, she asked the court if she could take some medication. The court found it would be unfair to continue if she felt unwell.

Bent over, she walked slowly from the witness box towards the dock as the judge announced the matter would be postponed to Friday to allow her to consult a doctor.

In our third video of former police constable Rosemary Ndlovu, we uncover a clip where Ndlovu explains how easy it is to steal a gun from the Thembisa police station, where she was stationed.

Ndlovu usually leaves the courtroom via a flight of stairs, but told officers after the adjournment that she was in too much pain and wouldn’t make it to the police van via the stairs.

This led the officers to use the public elevator to escort her from the third-floor courtroom.

They surrounded Ndlovu as she slowly made her way out of court and walked to the elevator, after which she was led out of the public doors towards the parking lot.

It was there that she lost her cool.

As photographers surrounded her, she flung food, which she had earlier requested from a journalist, at the photographers, hurling insults at them.

[WATCH] An agitated #rosemaryndlovu hurls her food at Journalists as police escourt her out of Palm Ridge Court. @Newzroom405 pic.twitter.com/xhc7i8RPSt

The police officers tried to stop her as she angrily lurched towards. Eventually she was put into the back of a police van, in which she sat on the floor, her legs stretched forward.

Earlier this week she gave the media a different reception, posing for pictures and asking them if they were satisfied with the shots they had taken.

“I woke up early to put on make-up for you,” former police officer Nomia Rosemary Ndlovu said jokingly to reporters.
News
1 month ago

But as the week progressed she became less receptive. On Wednesday, she repeatedly smacked the hand of one photographer as she ordered him out of the way. She has expressed irritation at the large media contingent covering her case.