Thousands march through Durban in support of their choice in leadership dispute, amid Covid superspreader fears 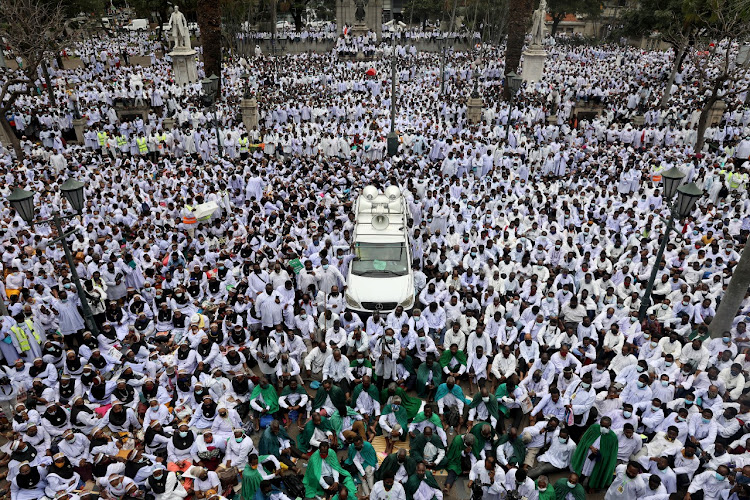 Thousands of followers of the eBuhleni faction of the Nazareth Baptist church brought Durban to a standstill on Tuesday as they embarked on a march to highlight grievances about the leadership dispute.
Image: Sandile Ndlovu

The eBuhleni faction of the Nazareth Baptist church showed its might on Tuesday when thousands of its members gathered and issued a stern warning to the ANC to intervene in the church’s leadership dispute or face the consequences at the upcoming polls.

Spokesperson Nkosinathi Makhanya read from a memorandum of grievances to government officials at the Durban city hall, where a gathering - believed to be about 10,000 strong - pledged their support for their preferred leader, Mduduzi uNyazilwezulu Shembe.

Traffic was brought to a stand still in the Durban CBD as about 7500 Nazareth Baptist church worshippers marched to the city hall . The worshippers, aligned to the eBuhleni faction chanted songs in support of Mduduzi Unyazilwezulu Shembe. @TimesLIVE
🎥: @sandysndlovu pic.twitter.com/R077YBBVJ2

“If the ANC thinks it can govern without us, our message is very clear. Let’s meet on the first [of November],” said Makhanya.

Shembe, the son of the church’s late leader Vimbeni,  has endured a number of legal blows in his bid to lead the church which boasts more than 5-million followers.

In June, a Constitutional Court judge refused to entertain his appeal to have the apex court challenge a ruling made by the supreme court.

Makhanya said their faction has long been at the receiving end of abuse.

“Our rights are constantly being violated. We are being abused for freely choosing our religion and our preferred leader,” he said.

He said they would continue to throw their full weight behind their leader, even if it costs them “billions” in legal fees. Whenever court judgments go against the church, they come under heavy backlash, he added.

“This taints our image as a church. What you must remember is that members rely on the church for healing, so when negative stories surface people become wary of associating themselves with us,” said Makhanya.

The battle for the control of the church started in 2011, soon after the death of Vimbeni Shembe. The church has in the past accused KZN premier Sihle Zikalala of favouring its rivals, the Thembezinhle faction.

The march, which commenced at King Dinizulu park, sparking concerns of it being a Covid-19 superspreader.

Makhanya said it was never their intention to have an “overwhelming” number of people descending on Durban. “We are cognisant of the dangers posed by Covid-19. It was unfortunate that more people showed up to the event as we expected not more than 500 people,” said Makhanya.

He said there was a group assigned to ensure that worshippers were wearing masks despite the lack of social distancing protocols.

eThekwini metro's superintendent Parboo Sewpersad said the walk's organisers had made an application to the municipality which was passed through the city manager's office.

“The application was to be in line with the Disaster Management Act which prohibits  gatherings of more than 500 people. It’s the public order police who must answer to this, we just play a supporting role,” he said.

The memorandum was accepted by officials from the premier’s office and the municipality.

The roads around King Dinuzulu Park in central Durban were a sea of white as masses of worshippers gathered on Tuesday morning.
News
10 months ago

The Constitutional Court has failed to come to aid of Mduduzi Shembe in his final legal bid to take the reins of the Ebuhleni faction of the Nazareth ...
News
1 year ago