Xolisile Gwebityala got the fright of his life when, after a brief stop, he returned to his car to find a large dog in it 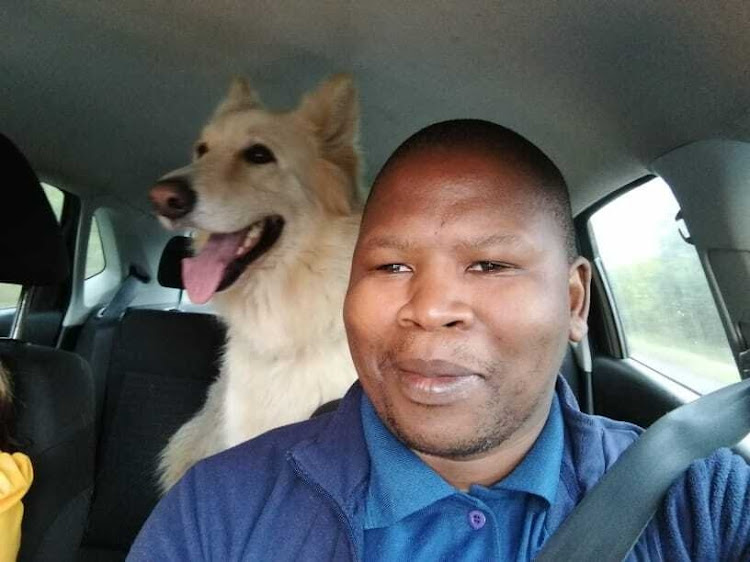 FIRM FRIENDS Xolisile Gwebityala and the dog he found on the back seat of his car after he stopped to relieve himself.
Image: Supplied

“Yoh! It was this huge, huge dog and it was just sitting in the back, neh. I didn’t know if it would chase me if I ran.”

Still in slight disbelief about his unusual — and uninvited — canine travel buddy, Xolisile Gwebityala relayed from his home in the Eastern Cape how he found his frightening surprise after he got back to his car after stopping for a toilet break.

Settling into the driver’s seat for the next leg of his trip, his eyes met that of a dog which had settled down comfortably on the back seat.

“So I looked at him and he just gave me the sign that he was not going to hurt me. Then he put his head down on his paws and just made this whining sound that told me this dog is in trouble.”

Gwebityala is a software developer and owner of XG The Brand. He does contract work and a while ago was battling after his contract with the Eastern Cape department of arts and culture ended and his wife fell pregnant with their baby boy.

“It was at that time that I had to take absolutely any kind of work I could get because I live in a rural area and contract work in IT is especially hard to come by,” he said, explaining how, for a time, he worked as a rubbish collector. It was during that period that he encountered numerous dogs, many of them vicious. 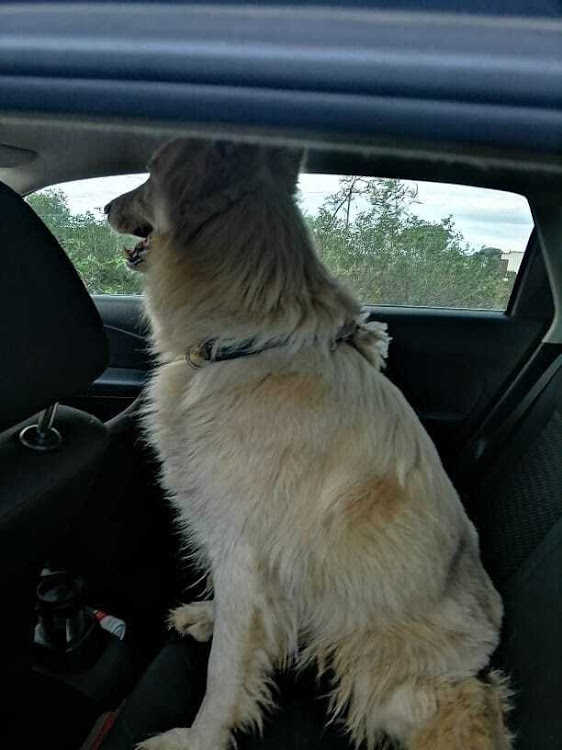 THE UNEXPECTED GUEST Happily seated after jumping into Xolisile Gwebityala's car, the dog has been reunited with its owners after spending a night at Gwebityala's house.
Image: Supplied

“Many times I would be picking up rubbish and a dog would just start barking or chasing me. I got bitten once, but every time I would jump high on top of those e-waste trucks. I was so scared. And then when they were gone, I would climb down and get back to lifting those bins.”

But Gwebityala’s software business started picking up recently and it was on his way home from working in Greytown that he encountered the dog in his car.

“I had just stopped to pee and my phone rang. So I opened the passenger door, grabbed my phone and took the call,” he said, adding that he left the door open.

After ending the call and “doing my thing”, he got back in the car, leant over to close the passenger door and spotted the dog quietly staring at him.

“Eventually I put my hand on his neck and he just started to play with me, so I realised this guy is friendly and decided to take him home.”

Gwebityala called his wife, who is also terrified of dogs, to let her know he was bringing one home for the night. She went to stay with her mother.

Gwebityala, who was still nervous and unsure of what to do because he does not have a large yard, put the dog in one of the rooms in his house for the night. He was pleased to discover that the canine was quiet, well-behaved and house trained.

“He never made a mess of my house at all and he never messed in my car,” he said.

The next morning he took the dog to the SPCA and posted his story and pictures on a local WhatsApp group, hoping to track down the animal’s owners.

“They saw the story, collected their dog and called me to say thank you. They are very friendly people and we still talk from time to time,” he said.

A pet insurer was so moved by Kei's bravery when she took a bullet for her adopted family during a violent home invasion that they decided to foot ...
News
7 months ago

Sightings of four venomous snakes on the same road within two hours on Tuesday had residents of a Durban suburb shaking.
News
7 months ago

Thanks to the spectacular work of police dog Bessie, the Vredendal Crime Prevention Unit and the Klawer K9 Unit managed to seize a large amount of ...
News
7 months ago

A Netcare employee who was accused of trying to dump a dog in the Boksburg area has been cleared of any wrongdoing after an inspection by the SPCA ...
News
7 months ago
Get the Sunday Times Daily app or daily email newsletter