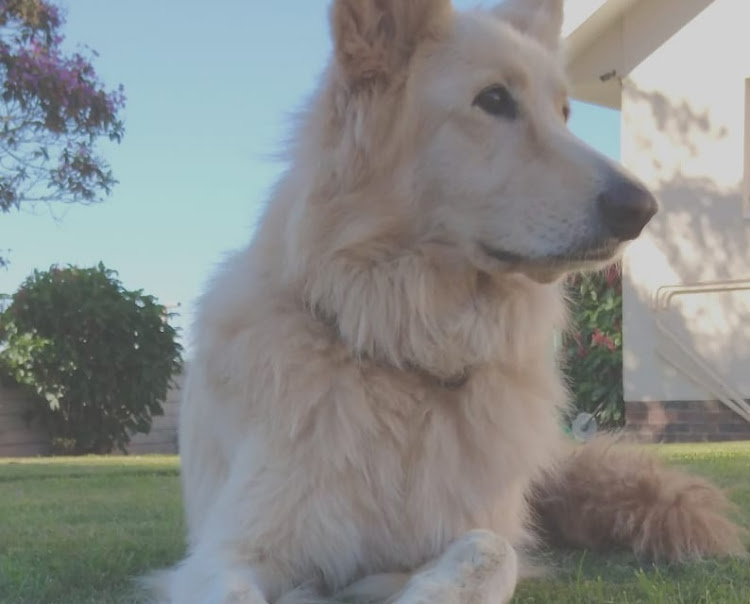 SAFELY BACK HOME Alaska, a nine-year-old Swiss Shepherd who disappeared from her family's farm in East London and was rescued when she jumped into the back seat of a stranger's car, is safely back home.
Image: Supplied

After having roamed more than 4km, jumped into a stranger’s car and frightened him, spent the night at his home and then being dropped off at the SPCA in East London, family dog Alaska is safely home.

The nine-year-old white Swiss Shepherd disappeared from the Mackenzie family’s farm during a storm in East London recently. The family of four bought her as a pup nine years ago and raised her as a house pet who sleeps inside.

“She is so friendly, but she really doesn’t like bad thunder or lightning, and she was outside when the storm hit. Our electric fencing was out, and she is a jumper so she just disappeared into the night,” said mom, Theresa Mackenzie.

Alaska roamed through the night and the next day, accidentally scared the daylights out of software developer Xolisile Gwebityala. She jumped into the back seat of his car when he stopped for a toilet break and left the passenger door open while he took a phone call.

Gwebityala, who is terrified of dogs, climbed back into the driver’s seat and encountered Alaska staring quietly at him.

Xolisile Gwebityala got the fright of his life when, after a brief stop, he returned to his car to find a large dog in it
News
1 month ago

A pet insurer was so moved by Kei's bravery when she took a bullet for her adopted family during a violent home invasion that they decided to foot ...
News
1 month ago

Thanks to the spectacular work of police dog Bessie, the Vredendal Crime Prevention Unit and the Klawer K9 Unit managed to seize a large amount of ...
News
1 month ago

The Netcare Group says it has identified a woman allegedly seen trying to dump a dog on the side of a road in Boksburg, on Gauteng's East Rand, and ...
News
1 month ago

“Yoh! It was this huge, huge dog and it was just sitting in the back. I didn’t know if it would chase me if I ran,” Gwebityala said, explaining how it happened that he ended up taking temporary charge of the tired pooch.

He took Alaska home for the night and, dropped her off at the SPCA the following morning. Then he posted a picture of himself with her on the back seat of his car on a community group page on Facebook.

Meanwhile the Mackenzie family were worried and had been searching for their beloved Alaska.

“My daughter and I both drove all over the place looking for her,” Mackenzie said.

“The next day I went to work, and although I never go on Facebook I logged on and the first thing that came up was the picture of Alaska with this friendly guy. I recognised her immediately. So I messaged him and he told me the dog was at the SPCA. I called my daughter, and she went straight there and got her,” she said, surprised by the amount of attention the incident had attracted.

“My girls are just scared now that Alaska is well known, and they are worried that someone will actually want to come and take her,” laughed Theresa.

“But we were very blessed that someone so nice picked her up and looked after her. Shame, she stays on a farm and is not used to traffic and people, so it is a relief to know she is safe and happy back here, sleeping here on the floor next to my feet.”