‘The place is falling apart around us,’ says angry doctor 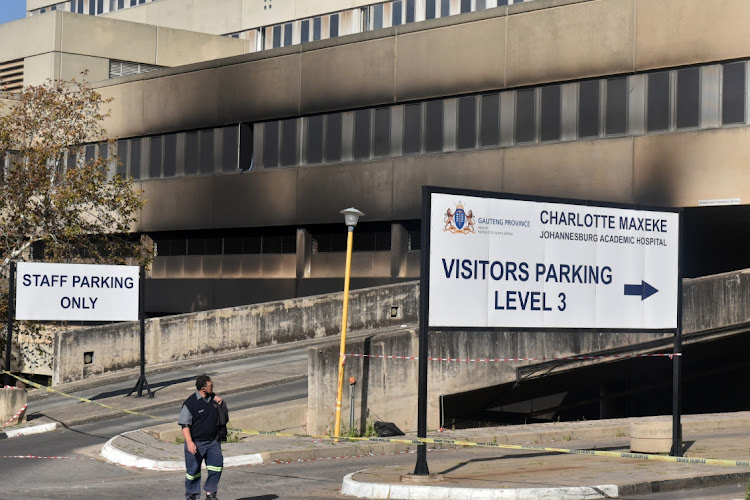 DEATH TRAP The Gauteng department of infrastructure and development has said the hospital will open blocks one to five, block by block, starting in May next year and ending in June 2024.
Image: Freddy Mavunda

No beds available for new admissions, oncology patients who had been moved at risk of infection and receiving suboptimal care, and patient overflows sent out to overburdened neighbouring facilities.

This is how Charlotte Maxeke Academic Hospital in Johannesburg — a dedicated Covid facility — is still limping along after a fire in April closed most of it.

“We are running like headless chickens. Nothing is getting fixed properly and the only successes we have had have been when Solidarity or Gift of the Givers have come in and taken over. Government should be embarrassed that an NGO had to come in and dig a borehole to supply a public hospital with water,” said a doctor who has worked at the hospital since 1997.

The hospital, the second largest tertiary hospital in the southern hemisphere, has been hit by fire, flooding, water outages and a litany of other problems this year alone.

And while much is being done to get the embattled hospital back to full operational capacity, it is scheduled to finally reopen the last block in May 2024, the Gauteng department of infrastructure and development said.

The department said the hospital will open block by block for partial occupation due to City of Joburg constraints on health and safety requirements, starting with Block 1 opening in May next year and ending with Block 5 opening in June 2024.

Now the nuclear medicine department with machines worth R50m to R100m is at risk of water damage.

But the irate doctor, who asked not to be identified, said he believed the department of health was failing to pay for work done, and that achievements so far have been only with the help of outside organisations and funders.

“They are just plugging holes and fixing with plaster, while the place falls apart and morale is so low that we are starting to speak out because the worst that can happen is we will be fired. Patients are silent because they are sick, scared and desperate for just a Panado,” he said.

“Two weeks ago a water pipe burst and flooded the surgical block. That got fixed and then on Monday that same pipe burst in the blue block, flooding the medical wards and damaging all the electrics.

“We had to move all the patients out to obstetrics and gynaecology, leaving adults in the paediatric ward. On Tuesday afternoon there was flooding again and we were told we could only move patients back on Wednesday. But we have learnt to wait rather than trust and at 8am on Thursday, just as we were ready to move back, things were still wet and electricity still tripping.

“Now the nuclear medicine department with machines worth R50m to R100m is at risk of water damage,” the doctor said.

The Cancer Alliance, a collective group of 33 non-profit organisations and cancer advocates, has compiled a list of patients awaiting treatment at the hospital. According to them, there are at least 1,000 men awaiting radiotherapy for prostate cancer for up to five years, about 500 patients in need of breast cancer treatment and about 300 women waiting for cervical cancer treatment, with an approximate wait of four to six months.

The palliative care waiting list for treatment is two to four weeks.

Jenna Skews of the Breast Health Foundation, one of a team of patient navigators who have survived breast cancer and now aids patients through the care process, said she was seeing patients who have been successfully treated for cancer, relapse or die waiting because of the radiation backlog.

She said of the 66 patients who have been referred so far this year, two were sent to other provinces, two were in end stage and receiving only palliative care, two had died and 60 remained on the waiting list.