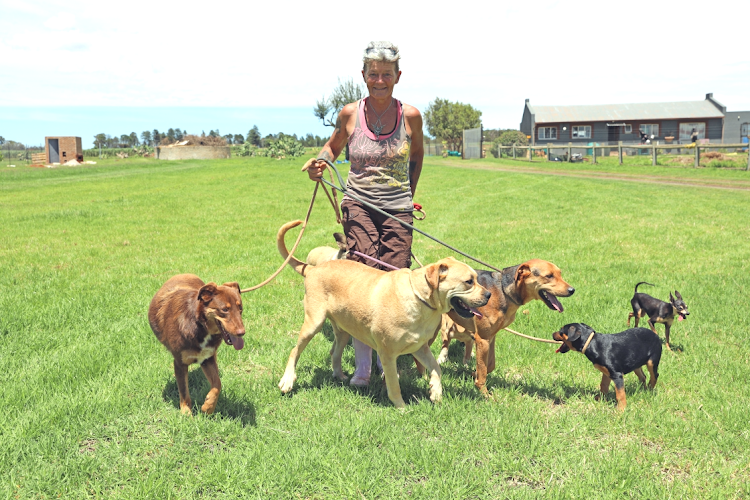 A DOG'S LIFE Linda Scrace with some of the rescued Dogs at Fora in Krugersdorp.
Image: Thapelo Morebudi

As the rains began to fall, the animals went marching — all 200-odd — to their new home in time for Christmas.

Taking a leaf from Noah’s Arc, Fora (Friends of Rescued Animals) — a well-established animal rescue in Gauteng — moved their menagerie of hundreds of unwanted and abandoned cats, dogs, pigs, goats and pretty much anything else you can imagine, to a new shelter.

Like a scene from a nativity play, but with bakkies instead of a large boat, the animals were moved from their old refuge in Mogale City to their new 15.6ha plot in Tarlton, Krugersdorp.

For years the rescue has rented a 4.6ha small holding for the hundreds of animals it shelters, but recently zama-zama activity (illegal mining), theft and other crimes have spoilt the beautiful spot that invited outsiders to come and play with dogs.

Now, after much saving and fund collecting, manager Linda Scrace and her team are converting the new plot into an oasis featuring picnic spots, a doggy swimming pool and play area for the animals to enjoy.

The great trek started at the beginning of November.

“Things got bad during the lockdown,” Scrace explained.

“We’ve always had zama zamas in the area, but during hard lockdown the illegal mining activities worsened, suddenly we had men running shaker tables right outside the fence. We used to walk the perimeter of the property with the dogs — we couldn’t do that any more.

“Then the zamas tapped into our underground water pipes. We were paying R25,000 rent a month and about R54,000 for water.

“We’d have people arrive and they’d tell us, ‘Do you know there’s a guy outside covered in dust holding an AK-47’? Families would leave because it wasn’t safe and we were losing volunteers.

“As an NPC we rely on volunteers and donations. The animals eat a tonne of dog food a week — and that’s at half capacity. So we couldn’t afford to live there any more.”

“Then there were shoot-outs and we’d have to shut down completely. The dogs were very traumatised — some tried to get through the fencing and injured themselves. We knew it was time to leave.”

We’d have people arrive and they’d tell us, ‘Do you know there’s a guy outside covered in dust holding an AK-47’?

Fora bought the Tarlton property in May and began burning to clear the area. A strike by the National Union of Metalworkers of SA added a few months onto their waiting time, as they couldn’t get any of the fencing up until November. But once two of the five runs were up, with shadecloth and kennels for 270 dogs, the big move began.

“We had to move them quickly so there wasn’t too much stress on the animals, and because we didn’t know what would happen to the property once we started moving.”

It took a week, and on November 13 all the animals were in their new home.

“We left that Saturday at 4.30pm, by Sunday the property had been stripped. Fencing, roof tiles, cables — everything was gone.”

Fora had stopped taking in animals during lockdown, so their usual pack of 450 had halved due to adoptions.

“We started with our special needs lot,” Scrace laughed as she pointed to a pack who had the free range of a garden fence enclosing the main office.

“These are our dogs who are scared or nervous — we keep the tripods [dogs with amputations] with them too.”

Besides dogs, Fora moved eight cats, three pigs, two sheep and 23 goats, “and there are a few rabbits, chickens and ducks running about”.

“We also have 17 puppies which came from two dogs. You must see them  — they’re all the same looking, then there’s this one.” Scarce showed off a fat fluffy brown puppy, the only of its sort among its black sleek-haired siblings.

1 tonne — the amount of dog food eaten a week at Fora.

6 — bakkies moved all the animals.

Wherever Scrace moves she is followed by a pack of pets belonging to her and the volunteers, including dogs which cannot be homed — like Ewok.

“Ewok, a fluffy brown chihuahua, is beautiful, people always ask why he hasn’t found a home yet — he can’t be homed.

“He went to a house in Sandton, and the owner brought him back the next day because he sh*t on everything: the table, silk couches, chandeliers. He does this with every home. Not here though. So we figured Ewok belongs here.”

As she laughed a tiny sleek black chihuahua named Toothless (or Boob), stopped sucking on her dry wors.

“Shame, Toothless has no teeth — that’s why her tongue hangs out.”

Scrace, the staff and the volunteers have named and know the names of every animal on the farm.

“This isn’t a shelter for pets. These are animals which really needed our help. Many have been burnt, abused or injured. It makes me angry when people come to drop off their animals because they are old. That pet has been loyal to you for 15 years and now you leave it. It’s very cruel.

“We want to make a place here where the animals can be stimulated and play, where they don’t feel as if they are in a cage. We want people to come and picnic and enjoy the space.”

Videos on social media of the pack being introduced to and running around their new plot have garnered hundreds of views, shares and comments from well-wishers and donors.

“We have found a vacant piece of land at a reasonable price, so we would have to build the entire shelter consisting of buildings, treatment rooms, dog runs, and catteries from scratch.

“By starting new, we would really like to give our animals an even better quality space than they have. Being a big shelter, I anticipate the new venture to cost somewhere in the region of R5m.”

The team are now fundraising to build a new cattery, set up a new office and put up a perimeter fence. They are also installing water tanks and piping to the dog runs and cattery and puppy area and building extra staff accommodation.