The former FlySafair carrier, renamed Shirley, will live on as a restaurant and watch over Formula-K racing events 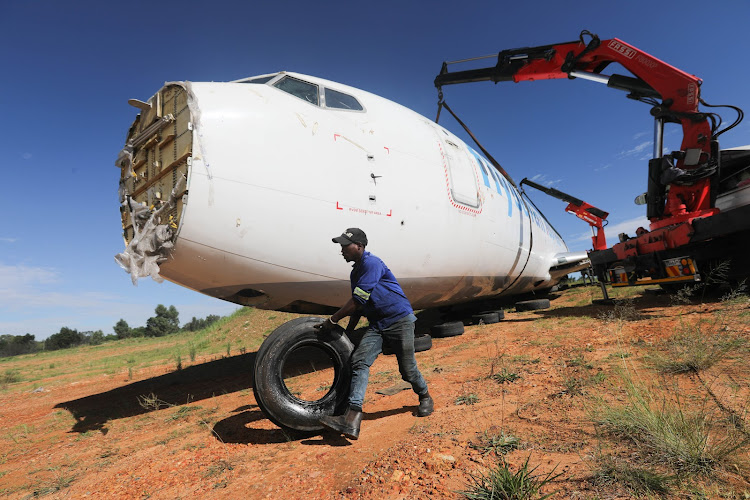 NEW LIFE Cassim Mayere of the moving crew rolls a tyre underneath the fuselage at Formula K in Benoni, Ekurhuleni. The retired aircraft will be turned into a restaurant.
Image: Alaister Russell/Sunday Times

To the insomniacs or very early risers in Benoni who might have seen an airliner cruising the quiet streets in the early hours on Tuesday: no, you were not hallucinating.

At 1.30am, with the “pilots” making the most of low traffic levels, a former FlySafair Boeing 737-400 began its last journey from Johannesburg’s OR Tambo International Airport.

The plane, which has been renamed 'Shirley', will be converted into a 52-seater restaurant and viewing deck for diners to watch the racing.

The aircraft, which had its wings removed before being loaded onto an abnormal load flatbed trailer, was en route to the Formula-K racetrack south of Benoni’s CBD, where she will be converted into a restaurant.

“Fortunately, she is not to be cut up and sold off as scrap metal,” Madelein Hendricks, one of the owners, told Sunday Times Daily.

The aircraft was bought by Brian Hendricks and Collin Whitaker, who felt people were looking for a “completely different culinary experience”. They envisaged buying a plane and positioning it in the middle of the racetrack circuit.

The Boeing, registration ZS-JRI, was one of the last remaining B737-4Q8 aircraft.

“She served her last few years with our friends at FlySafair,” said Hendricks, touching down for the last time on June 22 after a flight from Cape Town.

A former FlySafair Boeing 737-400 squeezes under the N12 highway bridge on her last journey to the Formula-K racetrack in Benoni. Video by Madelein Hendricks

The plane, which has been renamed Shirley, will be converted into a 52-seater restaurant and viewing deck for diners to watch the racing.

“She will be the centre of attention as she will sit right in the middle of the circuit, with her wings still attached,” said Hendricks.

Once the first phase of the conversion is complete, the owners plan to install a flight simulator in the cockpit.

Though only 29 years old, ZS-JRI was already approaching old age in airliner terms.

The lifespan of pressurised aircraft such as airliners is determined by pressurisation cycles and not years or hours flown, according to Air & Space magazine.

“Each time an aircraft is pressurised during flight, its fuselage and wings are stressed. Both are made of large, plate-like parts connected with fasteners and rivets, and over time, cracks develop around the fastener holes due to metal fatigue.”

The fuselage is usually the most-stressed component during these cycles, but wings are also affected, with aircraft used on short-haul routes generally experiencing more cycles than planes used on long-haul routes, the magazine added.

Once an aircraft reaches the end of its flying life, it is usually recycled for scrap or, in many cases, left to rot away in the corner of some forgotten airfield.

In the mid-2000s, nearly a dozen ex-Alitalia MD-82 airliners made their last flight to Upington in the Northern Cape, where many of their reusable components were removed for use on other MD-82s still in service. The frames were left to blister in the desert heat. 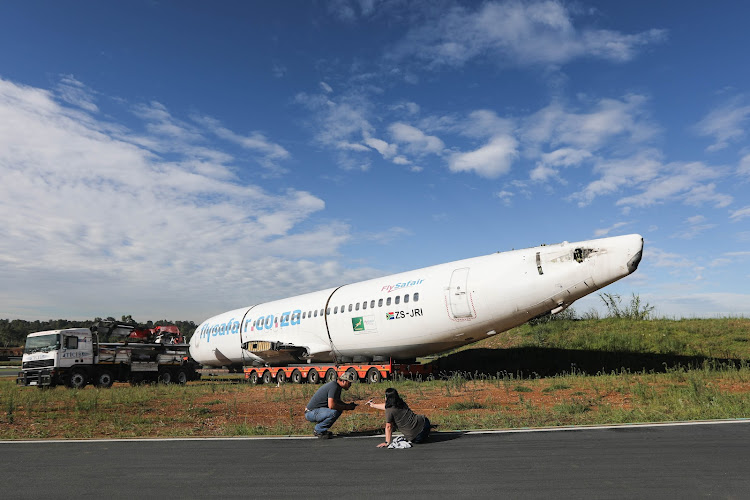 Members of the moving crew wait for a crane to arrive at Formula K in Benoni, Ekurhuleni.
Image: Alaister Russell/Sunday Times

Shirley is not the first SA airliner to dodge the scrappers and have a second career.

A former SAA Boeing 727 now “flies” out of the jungle as the Hotel Costa Verde on the coast of Costa Rica, after seeing out her flying days with a Central American airline.

Meanwhile, a four-engine Convair 880 airliner is in permanent retirement at the private Morganville motorcycle museum near East London.

The aircraft, one of two Convair jet airliners acquired by the former Ciskei in the 1980s, was tipped to enter service for Ciskei International Airways, as well as be on hand as the “presidential” VIP aircraft.

The airline imploded, along with the homeland, with the advent of democracy in SA in April 1994. One of the Convairs was flown to the US, where it was later scrapped, while the other remained firmly grounded in the Eastern Cape.