Kill or be killed: that’s the reality for kids in the Cape’s ganglands

Teachers go beyond the call of duty to keep them on the straight and narrow. Will it ever be enough? 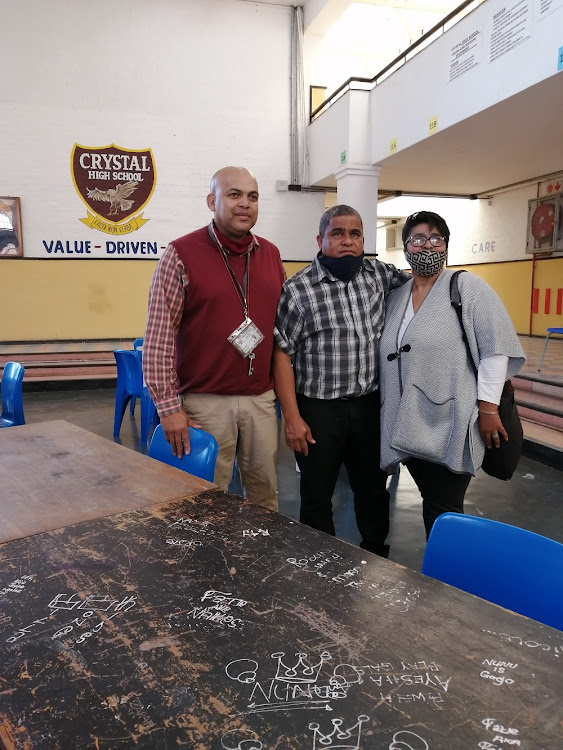 To celebrate our award-winning journalism, Sunday Times Daily is republishing some of the best Sunday Times articles of the year, including those that walked away with an accolade in the Vodacom journalism awards. Western Cape reporter Aron Hyman received plaudits in the Features category for the Western Cape for his excellent series of articles on how children on the Cape Flats dealt with life in the notoriously violent region. The series had a particular focus on the schools and teachers trying to help children through the challenges they faced.

Crystal High School’s Grade 11 head, Jerome Steyn, has seen it all. Based at the Hanover Park school in the heart of the Cape’s ganglands for 30 years, being a teacher to children who often spend their nights waging gun battles, is not for the faint-hearted.

It was in this area where, three weeks ago, 11 people were shot in 72 hours. Three were killed, while the injured included a five-year-old girl and a six-year-old boy.

“There are those kids who’ll say to you, ‘Sir, please speak a little less because I was out shooting all night last night’. He himself was shooting, he handled a firearm. He tells you that,” Steyn told Sunday Times Daily.

The children engaged in conflict on the streets of Hanover Park sit in Steyn’s classes. The pupils of Crystal High School are often tired. Some wielded guns the night before, some were shot at, others lay awake in bed, listening.

The Covid-19 restrictions made everything worse. During lockdown, eight of Steyn’s Grade 11 pupils fell pregnant.

“About six out of eight of those girls, it wasn’t their boyfriend. It’s due to this gangsterism and then it’s forced upon them, and soon they are beaten and told, ‘You’re my girl’, and then they just have to accept it. And they’re the most amazing girls,” said Steyn, who grew up in gang-plagued Elsie’s River.

This is the fourth and last instalment of our series on Cape gangland schools, where dodging bullets is part of life
News
1 year ago

Earmarked for terror: why Cape Flats kids join gangs, and how to save them

Driven by hunger and a need for acceptance, children become easy targets for gang recruiters
News
1 year ago

There are those kids who’ll say to you, 'Sir, please speak a little less because I was out shooting all night last night.

Some of these girls are the third generation in families Steyn has taught.

“The problem is, children get children. It’s a vicious cycle. There have to be programmes where parents are workshopped to be parents. Because there are no parents most of the time, or the father doesn’t understand his role, the son misses that,” he said.

“Anyone can be mom and dad, but not everyone is mother and father,” said Steyn.

Crystal High School had its valedictorian ball for matric pupils on Thursday. Only half of those who started school there in Grade 8 made it to matric. Some of the matriculants will become the first in their public housing blocks to pass Grade 12.

The prestige associated with being in matric is one of the few allures of taking part in the schooling system.

Crystal High School is overwhelmed by the broken community in which it is situated. Drugs are dealt on school property and gang fights take place in front of the school gates between children from rival factions.

“The main shooters in Hanover Park at the moment are 16, 17 years old, they were in our school last year,” school principal Dino Adams told Sunday Times Daily.

Teachers try to deal with class disrupters harshly, especially those who pose a threat to fellow pupils.

Nineteen-year-old Franklin Jantjies* (not his real name) was one of these pupils.

When he was 13 years old, he peered out of the window of his house and watched his friends play on their way to school. Behind him on the bed was his mother, who was dying of cancer.

He became one of Hanover Park’s most feared hitmen and he now treads the dangerous path of trying to leave a gang with the help of NGOs.

“I didn’t really have a childhood. I had to take care of my mother. I couldn’t play outside, my mother was too sick. I would stand at the window and watch my friends playing. My mom wasn’t working, what was I going to eat tonight?” Jantjies remembers.

“My friends would go to school. I would think about what I was going to eat. I would worry about who was going to look after my mom. Is she all right? These are things that constantly went through my mind while sitting in class. I can’t really focus because I haven’t eaten and what if something happened at home? I didn’t want to be at school, so I’d start problems at school so they would send me home,” he said.

“I just wanted to be at home. I bunked, smoked at school, all those things, just so they could catch me and send me home, just so I could be with my mother,” said Jantjies.

“That day my mom died, I fought with her because I was fed up. I’m so young and now I have to look after my mother. I can’t play outside! Why? I’m fed up, I don’t even have a childhood! I have to make food! I have to do everything! My friends are playing outside lekker. I was standing chest to chest with my mother,” he said.

They said my mom died. I couldn’t go back and ask for forgiveness.

He told his mom he didn’t want to live with her, and left to go and live with his father in another part of Hanover Park.

“Then they phoned me. They said my mom died. I couldn’t go back and ask for forgiveness. I couldn’t hear her last words. The last thing I said to her were rude words, I swore at her,” he said.

“That ate at me. I started doing bad things, hurting people, smoking drugs. I didn’t care what anyone said about me, no one is there for me,” said Jantjies.

His life spiralled rapidly into violence. In 2018, when he was 16 years old, he stabbed a pupil during a gambling match. The pupil was a member of a major gang in the area.

They gave him an ultimatum: be killed or become a killer for them. That was also the year he dropped out of Mount View High School, another school battling gangsterism.

“They said if I don’t kill someone, they will kill me. I was 16 years old.” That was the first time Jantjies committed murder.

He said he wished he could go back to school and to a life his mother would have wanted for him.

“I had to shoot people for them. They say they pay you, but that doesn’t happen, they give you nothing. In the gangsterism they’ll tell you, ‘We’ll look after you, we’re your brothers’, but when you’re in the gang, nothing like that happens,” he said.

“You fight over drugs which you don’t even smoke, territory that isn’t even yours, it belongs to the community ... It’s not even yours, what if the government puts you out of your house? Then you’re on the streets,” he said.

“Then I realised that’s not for me. I have potential. I know myself. My mother wouldn’t be happy if she saw me doing those things. Then I asked for help. I’m happy where I am now. I will never go back to that,” he said.

Asked if he ever believed he could be educated he said he doubted it.

“The teachers don’t know what you’re going through. They see you sitting there. They’ll chase you out, ‘We don’t want you here’,” he said.

But the teachers may see more than the children realise.

Steyn said teachers pour a lot of their energy into children such Jantjies, sometimes to the detriment of other children. When they become aware of such children they are obligated to refer these cases to other government structures.

He and his wife devote a lot of time to helping the community, taking in schoolchildren, especially during exam times, so they can study in safety, with regular meals. Their own children are now 15 and 18, with the eldest studying medicine at Stellenbosch University.

“We knew when we came to work here that we are moms and dads and everything. There are some of us who will take the kids home, especially with their matric year, we take them to our homes during the exams so they can just be in silence, with a proper meal, and have proper preparation to write exams,” said Steyn.

• This is the second in a series of features about children and gangs in the Western Cape. Read our first story here.