The men killed at Marikana were supported by their wives and mothers, who also bore the brunt of police brutality 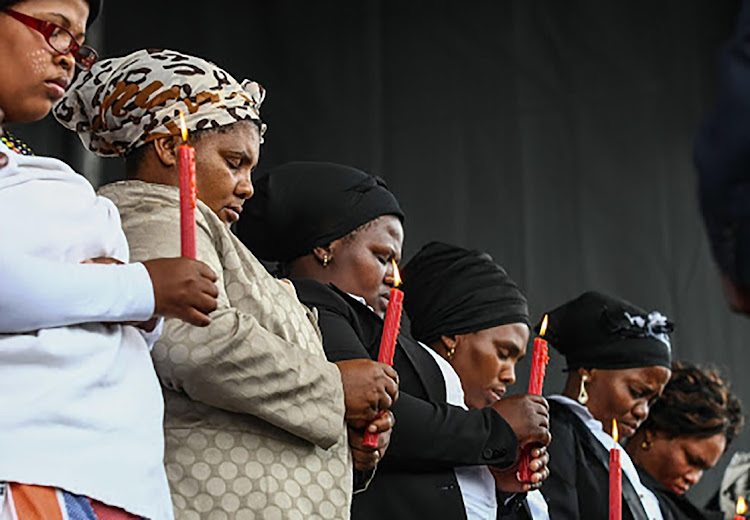 MOURNING Widows and relatives of the mineworkers who died in the wage-related unrest at Lonmin's platinum mine in Marikana in August 2012.
Image: Simphiwe Nkwali

“I know I am nothing but I will do good in parliament. Even without an education, I know what people on the ground go through every day. I went through that all my life.” — Nokulunga Primrose Sonti, EFF parliamentarian and former Marikana shack dweller and activist.

The strike of 2012, like mining itself, was the realm of men. The traditional healer hired by the miners prohibited women from joining them at Thaba as it would diminish the power of his magic potion. Despite this, women played a critical part in supporting the strike. Some were miners’ wives or girlfriends, while others had migrated to the mining camp on their own, in search of work or entrepreneurial opportunities.

Mandisa Yuma, the daughter of a migrant mineworker, dreamed of getting out of her village in the Sterkspruit area of the Eastern Cape. Yuma longed to leave the routine of poverty at home for a place with decent jobs, but still wanted to be close to family. Her mother’s sister had moved to Marikana several years before. She had built a house and was making a living renting out rooms to miners. When migrants came back during holidays, they always brought stories of the glitzy gambling and entertainment centre of Sun City, and of watching football matches in the same superb stadium where six World Cup matches had been played. The tribe on whose land the oldest platinum mines were situated, the Bafokeng, was popularly known as Africa’s richest tribe. It seemed to Yuma like the kind of place where her intelligence and tenacity would be rewarded. Yuma recalls her expectations when she arrived at her aunt’s home just outside Marikana in 2011: “When people come back home from Rustenburg, you see them wearing nice clothes. When I first came here, I thought I would see a place where people are living the life. Damn, this is not a place for people.”

She was shocked to discover that her aunt lived in a rough shack, identical to the ones she rented out to other migrants: “I thought my auntie had a house built with bricks, not a mkhukhu [shack]. I never knew this place is full of mkhukhu.” Yuma was surprised that her aunt used paraffin for cooking and lighting, that there was no toilet and that she had to relieve herself in the adjoining veld. Yuma called her father in tears. He persuaded her to stay on, go back to school in nearby Rustenburg and see where it led her. She obtained a qualification as a computer technician, but by 2013 was still only able to get a job as a cashier at the local Chinese-owned supermarket, earning R1,000 a month.

Yuma has adapted to life in a mining camp. She has grown accustomed to buying 25 litres of clean water for R3, enough for one day. If she wants to do laundry, she buys a drum of water for R24. Every day, the younger children of her neighbourhood race the empty containers on wheelbarrows to be first in line for the water truck. Yuma shrugs off her aunt’s deception, now aware that almost everyone lies to their families back home about their circumstances, few being willing to admit to the shame of living in a shack.

An older woman who came to find her fortune in Marikana in 1995 was Nokulunga Primrose Sonti. She found a job and endured a short marriage, the details of which she avoids talking about. Sonti was a fervent ANC supporter and became steadily more involved in politics. She befriended a female ANC councillor in the local municipality, Paulina Masuhlo. They made an incongruous pair — Masuhlo was a younger, broad-shouldered woman standing well over six feet tall with straightened hair, while Sonti, at 52 years old, was considerably shorter and preferred to keep her hair natural. They worked at the Nkaneng informal community centre, a roughly finished corrugated-iron structure with a hard-packed dirt floor, helping people solve problems. The pair were always out campaigning for the ruling party at election time. Sonti herself eventually ran as a councillor and was elected, but began receiving anonymous death threats. She decided not to take up the position, but continued to be politically active at the community centre. During the strike, the centre became increasingly important for the miners and their families.

On August 16 2012, Sonti watched on the television at her home in Nkaneng as the police rolled out the razor wire to encircle the strikers. She ran outside and began to repeatedly blow on the whistle that hung on a string around her neck. Many women came in response to her emergency call, and they decided to march on Lonmin’s headquarters to ask why the men were being trapped in this way. As the women prepared to leave, Sonti received a call on her cellphone from someone telling her that “the people are dying here in the mountain!” Sonti and the women then changed direction and began walking to the koppie, but before they could reach it, men fleeing in the opposite direction told them not to continue. “Please, mama, please, please, please, don’t go, it’s bad there.” The women were crying and screaming in anguish; it was their husbands, lovers, brothers, sons and neighbours who were being killed. The distressed women stood in the street and, as strikers ran past them, they began to pray, tears streaming down their faces. They prayed and prayed.

The next morning, Sonti and Masuhlo led a group of women in an angry protest. Some women carried signs offering a R500 reward for the killing of police officers “From Musina to Cape Town”. As the ANC continued to exhibit little concern over the killings or the squalid living conditions in Nkaneng in the days and weeks after the massacre, Sonti grew increasingly radicalised, turning against the party she had supported all her life. Masuhlo shared the same anger at the police, but retained her faith in the party. When the ministerial delegation led by Collins Chabane came to Nkaneng two days after the massacre, it was Masuhlo, dressed in a skirt and brocade jacket, who walked them to where a large crowd waited on the outskirts. She was excited to be hosting some of the ANC’s most powerful leaders but also nervous about the possible reaction from the alienated community.

On September 15, a cloudy day almost a month after the government visit, police mounted a large-scale operation into Nkaneng to look for guns and arrest strike leaders. For those not familiar with public order policing actions in SA, these are not disciplined, humane affairs. People living in the more impoverished communities know that random shooting and arbitrary arrests usually accompany police raids. Barricades of rocks and burning tyres were erected to obstruct the rugged police Nyalas as helicopters hovered overhead, and the acrid scent of teargas prevailed as riot police officers fired haphazardly from armoured-vehicle gun ports.

A woman EFF activist from Marikana in the North West is heading to Parliament. "Yes, we have her because of her leadership qualities. She was ...
Politics
7 years ago

Sonti and Masuhlo were standing with a group of women who had gathered on the bleak patch of clayey earth and wiry grass known as Nkaneng Square. They were to meet human rights lawyers from Johannesburg in the community centre. The women’s attempts to obtain permission for a march were being blocked by the municipality, and the lawyers were to assist them in overcoming the local government’s obduracy. One of the white and blue armoured vehicles raced towards the women, the police officers inside firing their shotguns at them from the portholes set in the windows. Most of the women scattered and began to run, trying to duck into the narrow alleys between the shacks. Sonti and Masuhlo did not. Sonti pulled the hood of her sweater over her head, folded her arms and turned her back to the police, waiting for a projectile to strike her. The sound of gunfire grew closer and closer, rubber bullets rattling off the shack walls. Sonti braced herself, expecting to be hit at any moment. Then the Nyala was gone, as suddenly as it had appeared. Masuhlo called out: “They shoot me, Primrose!” Sonti turned to her friend and saw the blood running down her leg. Other women had also been shot, and the air was filled with the crying and screaming of hurt women. Two rubber bullets had hit Masuhlo, one grazing her abdomen and the other embedding itself in her knee. Eventually she was taken to Rustenburg hospital, a 45-minute drive away. The remaining women gathered in the square, praying fiercely and singing the traditional struggle lament Senzeni Na?

Sonti visited Masuhlo the next day. Her friend was in good cheer, chatting and laughing. The graze across her abdomen was not serious, but the doctors were to remove the bullet embedded in her knee the following day. Sonti did not hear from her on the day of the operation, but Masuhlo called her Monday, begging her to visit as she missed her and was bored. Sonti could not make it, but promised to come as soon as she could. By now the miners had been on strike for six weeks and Sonti was the community representative in the negotiations with Lonmin. Sonti was consumed by the talks as they accelerated to a resolution and believed that Masuhlo was already back home. But even as the deal to end the strike was reached, a woman came to see Sonti with the news that Paulina Masuhlo had never been released from hospital, that her best friend had died there. Sonti began to weep with shock and grief. She was mystified; it had just been a wound to her knee.

— This article was first published by New Frame.