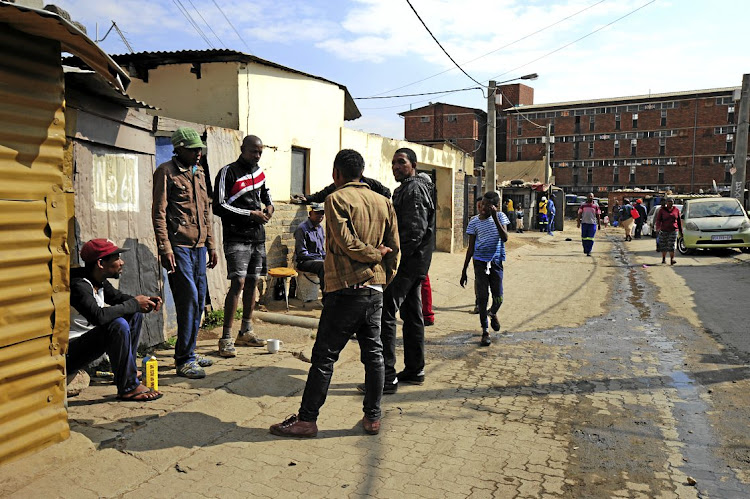 QUO VADIS, SA? On any street corner in SA, jobless men with no hope of employment are left to fill the hours with listless chat.
Image: Thapelo Morebudi

As we approach International Anti-Corruption Day on Thursday, I was reminded of Nelson Mandela’s words: “Our hope for the future depends on our resolution as a nation in dealing with the scourge of corruption. Success will require an acceptance that, in many respects, we are a sick society.” The father of SA’s democracy was more concerned about how society, collectively, would deal with corruption. This may have come from an understanding it impedes national development.

A study commissioned by the SA Institute of Charted Accountants (SAICA) on state capture revealed our country lost close to R1.5-trillion to corruption between 2014 and 2019. If these monies were spent on that for which they were earmarked, they would have improved the quality of life for masses. Bloomberg, in September 2020, declared SA may be a failed state by 2030. This is seriously concerning. Should such a fate befall this country, people will face devastating circumstances, as the economy and state institutions would have collapsed.

Mandela argued that to deal with corruption, we first have to accept we are a sick society. The question is: are we?

It is difficult to answer this question. However, Ghanaian writer Ayi Kwei Armah may have attempted to do so in his 1969 novel The Beautyful Ones Are Not Yet Born.

It focuses on deeply entrenched corruption, but what is disturbing is the manner in which society embraces perpetrators of wrongdoing. In SA, many leaders have made shocking public statements about corruption. We should not forget Smuts Ngonyama, former ANC national spokesperson, who once said people were not in the struggle to be poor, meaning, in author Michela Wrong’s words, it’s our turn to eat.

Unfortunately, when politicians and shady business personalities are tried in our courts, people come out in their numbers to support them. It's only in a sick society that such things happen.

Just like in Armah’s novel, the post-Apartheid dispensation in SA is not peculiar. The country faces widespread corruption. Society has not convincingly called for its eradication. Instead, we often celebrate the beneficiaries of corruption when they display their ill-gotten wealth. Within this context, perhaps Mandela was correct to suggest we are a sick society. The corrupt ought to be challenged head-on by society.

Unfortunately, when politicians and shady business personalities are tried in our courts, people come out in their numbers to support them. It’s only in a sick society that such things happen. The question is: quō vādis, SA?

There may not be a comprehensive answer, but days such as the annual International Anti-Corruption Day may play an important role in reshaping the moral fibre of our society. This day is commemorated to remind the world of the importance of the UN Convention against Corruption (UNCAC). This international treaty was adopted by the UN General Assembly in October 2003. It seeks to connect global efforts in the fight against corruption because corruption reverses any nation’s development gains.

One imagines that those behind drafting our constitution, the supreme law of the land, never imagined we may one day have to discuss ways and means to eradicate it. This is evident in the document because from what I can make out the word “corruption” does not appear in the constitution.

This year in SA we commemorate International Anti-Corruption Day under the theme “Your right, your role: Say no to corruption”. As part of it, a webinar is being hosted by the Public Service Commission (PSC), the University of SA (Unisa), the UN’s regional office and the SA government to discuss how, as individuals, we can fight corruption because we all have a role to play in doing so. The hope is it’s not treated like another box-ticking event, where stakeholders pay lip service.

SA is yearning for an ethical, capable. We dare not fail our people. Let’s all say no to corruption to salvage our national democratic project.

Kgabo Morifi is a researcher at the Office of the Public Service Commission, a part-time lecturer at the Tshwane University of Technology (TUT) and provincial secretary of the Young Communist League of South Africa (YCLSA). He writes in his personal capacity.