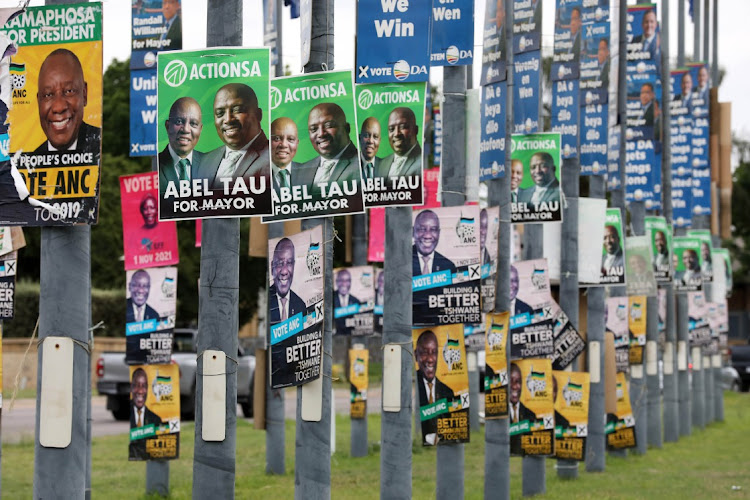 SO POSTERS We probably should be less ecstatic and more reflective about what last month’s election outcome may mean for us as a country, says the writer. File photo.
Image: ANTONIO MUCHAVE

The ANC’s recent electoral bloody nose has been greeted with unbridled celebration in many quarters.

Finally, the party that dominated our politics since the dawn of democracy had been put in its place, so to speak. It failed to gain control of the majority of metropolitan councils, including Joburg and Tshwane; eThekwini it held on to only by the skin of its teeth.

Here and elsewhere, instead of being the one calling the shots, the ANC was reduced to but one of many parties desperately searching for political partners.

For the ANC’s critics, the results suggested that its nightmare scenario (of being a mainly rural party with no influence in the urban areas) was finally coming to pass.

This, it shall be remembered, is the party once said by a previous leader to be destined to rule until the Son of Man returned.

The diffused party influence resulting from the local government elections was hailed by some as a sign of a normalising, maturing political system, reflecting the wishes of the voter.

Coalitions, it was averred, would force the different political parties, without sufficient majorities, to work together, presumably for the public good. The temptation to extrapolate last month’s election results to the 2024 general elections proved irresistible. Predictions came thick and fast about how badly the ANC was likely to fare in that poll, and how November 2021 was a portend of our future political power balance.

But we probably should be less ecstatic and more reflective about what last month’s election outcome may mean for us as a country. Despite its aspiration to being a united, non-racial utopia, our country is still wracked by deep fault lines, with a potential to rip it apart.

For instance, on the economic front we remain, as often noted, one of the most unequal countries in the world.

The danger of having such disparities, with so many citizens consigned to the periphery of poverty and hunger, was demonstrated in the July riots.

Besides the economic chasm between rich and poor, we still have to address the age-old divisions between the races, the persistence of which threatens the nation-building project.

The other driver of division is a political culture which encourages the emergence of sectarian and racial politics rather than promoting national unity.

This is why many of our parties, from the ANC itself to the DA, to the EFF and the Patriotic Alliance, are happy to draw their support from racial power bases.

The parties reckon they can advance their political fortunes by pandering to their constituencies’ parochial needs and prejudices, rather than leading their followers to a better, more inclusive society that guarantees a place in the proverbial sun for every South African.

In addition, the basis of the compact reached in 1994 to build a new, united nation is increasingly coming underchallenge as sections of society question many of its underpinnings, from the national anthem to the use of language in our institutions.

This may be the result of the key architects dying off or being too exhausted to defend the new dispensation.

Doubtless, it is also because of disillusionment among too many, particularly the young, at being excluded from the promised fruits of change.

The question that arises is: if the various contesting interests were to square off to press their respective demands, who would mitigate those? If the country were to be threatened by racial or tribal warlordism, who would intervene in the interests of the country and its people as a whole? SA is, therefore, a country that needs a strong centre to keep its disparate interest groups together. That centre must seek to unite South Africans across racial, tribal, religious or economic divisions.

At some point, before ascending to power, the ANC might have been that uniting force. In a society deliberately divided by the apartheid authorities, it was a leading agent in executing the non-racial, national unity project — welcoming within its ranks South Africans of every race, while fighting for the rights of an oppressed majority.

What the country needs is a new centre, premised on ensuring that the interests of all are catered for, and that the unity of the nation is preserved.

The presumption that leaders caught up in coalition politics will, by that very fact, suddenly develop the common sense to lead in the national interest, and for the common good of all, as opposed to that of narrow, self interested constituencies, may yet prove to be woefully misplaced and baseless.

Rather than romanticising the balkanisation of our politics, we should be seeking ways of mitigating that — in the interests of unity and progress for all.