Kenyan atheists: why accurate numbers are hard to come by 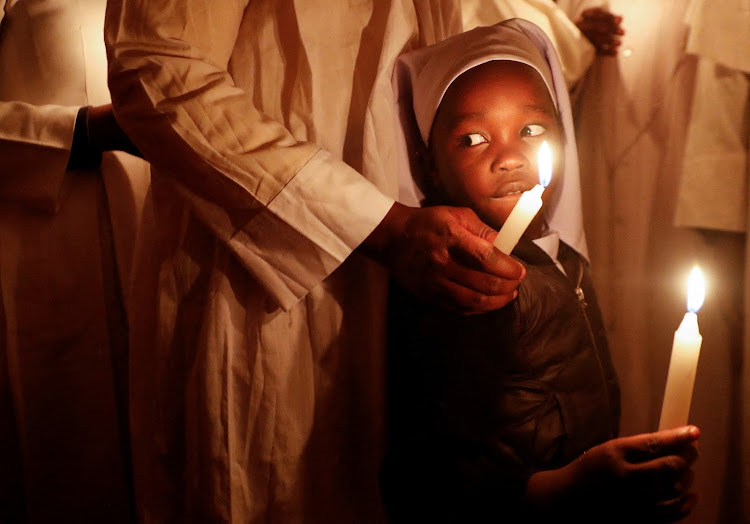 LITTLE LIGHT OF MINE A worshiper guides her child after lighting a candle during Easter vigil prayers at the St Joanes, Legio Maria of African Church Mission within Fort Jesus in Kibera district of Nairobi.
Image: Thomas Mukoya

The accuracy of statistics on religious affiliations in sub-Saharan Africa is questionable. This makes it difficult to assess religious trends.

The issue has come to the fore recently in Kenya with the release of statistics around religious affiliation. In particular, the fact that the census showed 1.6% of Kenyans identified themselves as atheists, agnostics or as following no religion. In the parlance of the census, they were classified as “nones”.

But is this number accurate? I think it’s doubtful. There are two major reasons why.

The first is that religious statistics are highly politicised because they’re associated with ethnicity and politics. Across the continent, there has generally been a tendency by politicians to co-opt religious leadership for their campaigns.

According to some surveys, people generally trust religious leaders more than politicians. It therefore makes sense for politicians to enlist these leaders.

Anthropologists Yonatan N Gez, Nadia Beider and Helga Dickow point to a number of examples in their study on this issue. In Chad, for instance, due to the protracted civil war between 1965 and 1979, the 2009 census was withheld due to implications for the demographic balance of Muslims and Christians. And in Nigeria, Muslim leaders threatened to boycott the national census if the category of “religion” was included in the questionnaire.

God, grief and Good Friday: A response to Eusebius McKaiser

After four family deaths in the past six weeks, two of which felt unfair, unjust and "unnatural", I spent most of Good Friday in the comforting ...
Opinion & Analysis
4 months ago

The ban in Karnataka has sparked protests by Muslim pupils and parents, and counter-protests by Hindu pupils
World
5 months ago

The academics warn that these examples show that census reports in Africa should not be taken at face value when it comes to religious affiliation.

The second reason the accuracy of statistics on religious affiliation is flawed has to do with the way census questionnaires are designed, particularly around the category of “nones”. The use of the category varies widely. In some countries, it is used to encapsulate a range of groups that are not affiliated with religion. In others, it’s left out completely. A study of 105 census reports in Africa found that only 64 employed the category of “nones”.

These problems explain why census data could be showing a stable and very low percentage of African “nones”. This runs counter to the global trend of declining religiosity.

The difficulties in correctly projecting “religious nones” on the continent has further been highlighted by the three anthropologists in their study. They say estimates of this category vary greatly, depending on the design of each piece of research. This includes the sampling methods used and how questions are framed.

For example, a 2012 Gallup poll pegged “religious nones” in sub-Saharan Africa at 7%, the highest estimate. In the middle are the most extensive data sources on the topic, the Pew Research Center (2010) and Afrobarometer (2018). Both put “religious nones” at 3.2%. At the bottom is the World Christian Encyclopedia’s estimate of just under 1%.

And now, the latest census figures (2019) suggest that 1.6% of Kenyans are “nones”. The “nones” as measured in Kenya include a range of groups such as atheists, agnostics and humanists, pointing to a broad scope and lack of precision. The website of the Atheists in Kenya Society also includes a range of groups with different orientations but united by non-belief.

Data show a global decline in religiosity. A comparative study of 1980 to 2020 indicated the following global trends:

Five spiritual tourism destinations and how to experience them

As the world returns to international travel, we expect sacred places to grow popular with tourists looking to go inward
Lifestyle
3 months ago

It is against this backdrop that the Kenyan census data stand out.

The difficulty with most surveys, including the state-run census, is that the questions are not clearly defined – or key factors that distinguish different cohorts are ignored, sometimes deliberately to skew the outcomes. The religion question is considered unambiguous and definitive. However, religious pluralism is commonplace in much of sub-Saharan Africa.

Religious affiliations are typically believed to influence individual behaviour. Global trends reveal that in countries with a lower GDP, there is a higher likelihood of people associating belief in God with morality. Kenya, Nigeria and SA are countries with lower GDP per capita and have shown greater affinity with belief in God to have good moral values.

In the West, younger populations tend to show less concern for belief in God to have good values. In Nigeria, and presumably in Kenya too, no such age difference is visible in claiming that belief in God is essential for having good values.

There seems to be a small difference between how Protestants and Catholics fare in this equation. In Kenya, more Protestants than Catholics claim that God plays an important role. The sentiment is similar in SA, too – Protestants 98%, Catholics 97% and people from traditional religions 92%.

Given these statistics, atheists in Kenya have their work cut out in gaining larger support from society to freely co-exist. However, lumping them in the broader category of “nones” makes them less visible as a distinct group.

The Atheists in Kenya Society has battled state authorities over registration. Their application was initially declined in January 2016 before being approved the following month. In April of the same year, the country’s attorney-general suspended the society’s registration. Two years later, after an appeal filed at Kenya’s high court, registration was reinstated.

The society, however, has a long way to go to convince the rest of Kenya to embrace a secular life. If Kenyan atheists want to lobby for a secular mode of life and have prayers removed from schools, then they need to convince the larger society as to why atheism matters in the country. They also need to address the underlying assumptions of freedom in a secular society.