Many of his poems convey anger and, ironically, there is beauty in those expressions of fury. 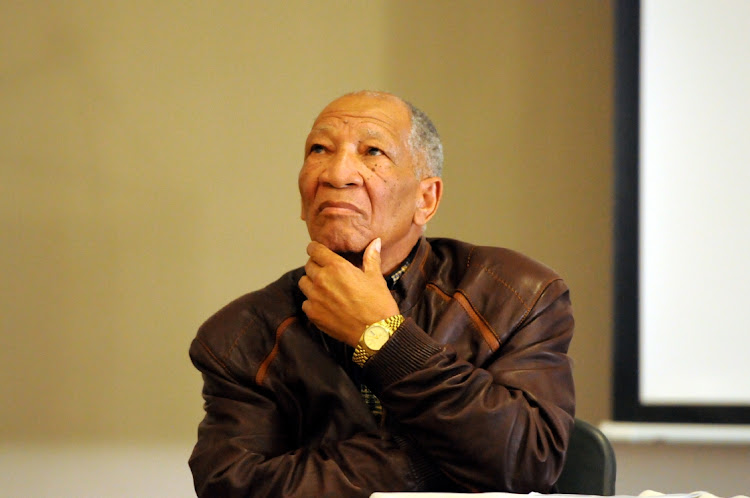 Don Mattera is a legend in so many circles and his poems are lyrical, vivid and impactful.

At his funeral scores of well-known figures from different walks of life were there to express reverence for his immense poetic legacy rather than to honour party-political bonds. And yet Mattera’s poems are marginalised in academic circles.

His poetry is “un-studied” and his poems have been left out of all but one South African poetry anthology. In Years of Fire and Ash – South African Poems of Decolonisation, a recent text, editor Wamuwi Mbao has repeated this erasure.

Mattera’s poems are thoughtfully crafted, involving clever deployment of repetition, rhyme and poetic devices such as a simile and metaphor. In I Feel A Poem, the poet likens the creation of a poem to birth. “Thumping deep, deep,” the poet writes. He feel the “tiny fists beating/beating against my being/breaking the navel cord/crying, crying out/ to be born on paper”.

In the poem, Azanian Love Song, he uses simile to powerful effect. In stanza after stanza it begins with an imposing tree. He writes: “Like a tall oak/I lift my arms to catch the wind” and in the next stanza “Like a straight pine/I point my finger at God.”

The poems are lyrical, both in the sense of a musical quality and of creating striking images that flow with the poem’s tempo. The words carry you along; the very quality that made them so powerful when Mattera recited them from stages over the decades.

Many of Mattera’s poems convey anger and, ironically, there is beauty in those expressions of fury. His words sing on the page: they bring you to a pause, engage you through one or more of your senses and entice you to see old things in new ways. For A Cent – a poem that is almost bare of poetic devices but remains striking in its simplicity – works like that:

corner of Pritchard and Joubert

and leaning on a greasy crutch near

his spectacles are cracked and dirty

he does not see my black hand

drop a cent into his scurvy palm.

but instinctively he mutters:

‘THANK YOU MY BAAS’

that for a cent

a man can call his brother

A skilful conjuror, Mattera constantly shuffled the deck between anger and compassion.

There is an incisiveness and conciseness in Mattera’s poetry – an effect that cannot be achieved through reportage. In No Time Blackman (a title that deployed language used in the Black Consciousness (BC) movement in years past), there is poem is an outpouring and a call to action. He exhorts the oppressed person to “put that cap/ back on your beaten head/look him in the eye/cold and blue ... and tell him enough/three centuries is more than you can take.”

There is an incisiveness and conciseness in Mattera’s poetic anger – an effect that cannot be achieved through reportage.

The “action” here is a straightening of the back and adopting a stance of defiance. This resistance orientation made Mattera and other outspoken poets reject the term “protest poetry”. In the words of another veteran BC poet, James Matthews: “We are angry; we are not protesting; (the aim) was to give expression to things that a lot of us are fearful of saying out loud.”

But why do wordsmiths and visionaries like Mattera turn to poetry when they already hold the power of journalism in their hands? The answer is this: through poetry they peel back the layers, they go beyond our defences, they engage us at an emotional level. In addition – and especially so with a reflective poet such as Mattera – they simultaneously use the craft to process personal pain. Through the painstaking work, Mattera the artist was dealing with his own accumulated pain, having lived through forced removals, the Native Land Act, restrictions on movement, banning orders and torture in detention. He is moving from pain to gain, from reaction to clear-guided response. Through art he is instilling an ethic of humanism, beauty and higher values into the necessary militant response.

“I am a spirit being,” says Mattera as quoted in an Index on Censorship article in 1971. “As a writer I must be allowed to find my own way to expand Black Consciousness.” In resorting to poetry, Mattera was consciously working with beauty, using it as a means to connect on a deeper level with his fellow humans. Beauty (in the sense used here) is the deft work of the creator or craftsperson who works with diligence and care to make something special for receivers of the work.

Mattera, with his love of language and people, has constituted a bridge par excellence between an older generation of poets and newer ones. Combining his philosophical bent and commitment to poetry, he constantly engaged emergent poets. In a radio interview with the late Myesha Jenkins he shared impish joy at using iambic pentameter (the de-dum, de-dum, de-dum beat so prevalent in Shakespeare’s writing) in his works. In 2011, in an extended session with Matthew Moekena, Vangi Gantsho and other young poets, he advised: “Be curious, conquer words and then string them together in ways that are unique.”

Don Mattera: Poet of the revolution

You had to see and hear Don Mattera in full flight at Regina Mundi doing his Sea and Sand thing to know you were in the presence of greatness.
Opinion & Analysis
3 weeks ago

The long queue of cars just as you approach Ramaite Street in Protea North, Soweto, on Monday night was an indication that a giant had fallen.
News
4 weeks ago

‘We have lost an icon in the literary and arts fraternity. Don’s passing will leave a literary void, not just here at home but globally.’
News
4 weeks ago

A Spaniard in the works to steer the Sea Robbers

When Orlando Pirates turned 75 years old in 2012 – a year in which the ANC celebrated its centenary – they lined up a series of festivities.
Sport
1 month ago