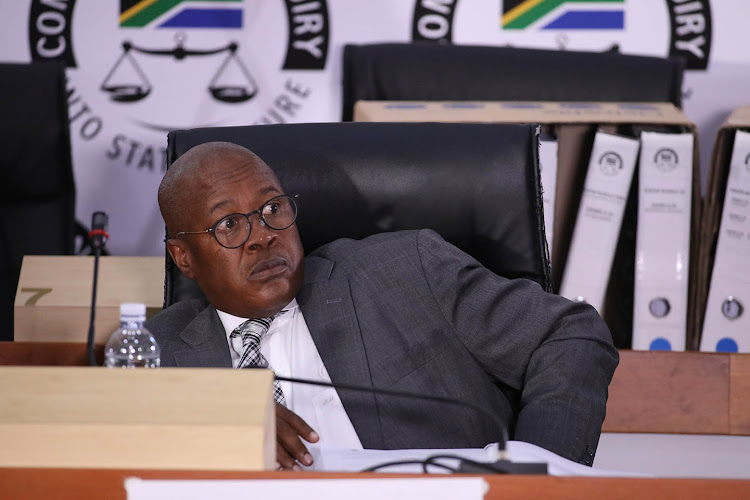 BULLISH Former Eskom CEO Brian Molefe was back in the hotseat at the state capture inquiry on Monday.
Image: Veli Nhlapo

Renowned late Motswako pioneer and SA rapper HHP once released a banger of a summer song titled Bosso Ke Mang (“Who is the boss”) which became an anthem for fun lovers during the 2016 festive season.

That song title was probably the most relevant question to ask about the war of words and sarcasm between former Eskom and Transnet boss Brian Molefe and state capture inquiry evidence leader adv Anton Myburgh on Monday.

It was a clash of egos between Molefe and Myburgh, and neither was willing to back down from the confrontation.

In several attempts to intervene and restore order and sanity, commission chairperson deputy judge president Raymond Zondo was not spared any stray bullets.

'He was aiming for my head': Key state capture witness survives dawn hit

The Hawks are investigating a brazen daylight hit attempt yesterday on a key witness at the Zondo commission of inquiry into state capture.
News
1 year ago

It all started when Myburgh and Zondo attempted to corner Molefe on his version of how he never had sleepless nights upon revelations that the Gupta brothers knew of his career advancement in advance.

The commission had put to Molefe that it was too much of a coincidence that the Gupta-owned defunct newspaper — The New Age — knew of his appointment as Eskom CEO months before it happened.

It was strange, therefore, held Zondo and Myburgh, that Molefe was unfazed that his friends the Guptas always knew of his promotions before he did.

“I would have expected you to be concerned about that,” said Zondo.

Molefe fired the first salvo: “Maybe unlike you [Zondo] and Mr Myburgh, I am not a good conspiracy theorist.”

Myburgh pressed on: “Mr Molefe, Mr Essa was engaged in corrupt activities, using your name. Can you be quoted to be saying that did not concern you?”

Molefe responded: “You say Mr Essa was engaged in corrupt activities using my name. Is that what you [the commission] have found? It is alleged that he was using my name.”

Molefe’s insistence that he was not worried about Gupta predictions that turned out to be correct about his career’s upward mobility, prompted Myburgh to say: “Perhaps, Mr Molefe, you and I live in different worlds.”

Molefe replied with a sarcastic: “Yes, you and I do, Mr Myburgh.”

The sparring session between the duo was not over yet.

Former Eskom and Transnet CEO Brian Molefe will on Monday begin with Transnet-related testimony when he appears at the state capture inquiry.
Politics
1 year ago

Myburgh moved his line of questioning to issues pertaining to Molefe’s links with the Gupta brothers. The evidence leader was interested in picking Molefe’s memory on the number of occasions he visited the Gupta compound. They argued on that point for a long time, each standing his ground, until it also degenerated to a sparring match.

Molefe responded with a right hook: “I understand mathematics is a complex subject, maybe for you Mr Myburgh, but I said you cannot draw a graph because if you do, you will arrive at the conclusion that I was there last month.”

Molefe could also not remember when he ceased visiting the Gupta residence.

He also could not recall how often he spoke to Ajay, the Gupta brother he was most close to.

Myburgh was not convinced, saying it was not good enough for an “intelligent man” like Molefe to forget things that are so important.

Molefe took exception: “Mr Myburgh, it is not necessary to patronise me. Please do not patronise me. Chairperson, I take exception in Mr Myburgh saying I am an intelligent person and so on; that is patronising.”

Myburgh then accelerated his questioning to seek Molefe’s say on former finance deputy minister Mcebisi Jonas’s testimony that the Guptas had told him they could take good care of his political career, like they did of Molefe’s.

Former Eskom CEO Brian Molefe told the state capture inquiry that his career did not need external influence to flourish, contradicting claims by ...
Politics
1 year ago

“That statement as is put by Mr Jonas, without being corroborated, if it were true, would advance a particular narrative that would excite Mr Myburgh,” said Molefe, before moving on to have a legal argument with Zondo on how guilty or not the Guptas were of the crimes they are accused of.

This exchange, too, ended in sarcasm.

“Even the Guptas have rights according to our constitution. Let us wait for the right legal processes to unfold. They have not been put through a proper legal process,” said Molefe.

“But of course you know that they fled the country,” said Zondo.

Molefe responded: “And their assets were attached and subsequently returned after a proper legal process. The fact that they have left the country, like Bushiri [self-proclaimed prophet], in terms of our constitution that has captured me, does not mean we then treat these people like they are guilty?”

Myburgh moved to a new topic, on which he had to refer to the evidence of Transnet chairperson Popo Molefe about the damage left at Transnet by Molefe’s alleged mismanagement.

His mistake was referring to Popo as “Doctor Molefe”.

Myburgh replied with “Popo Molefe” and Brian continued: “Oh, so he is Dr Molefe”?

“I understand so, sorry if I got it mixed up,” said Myburgh.